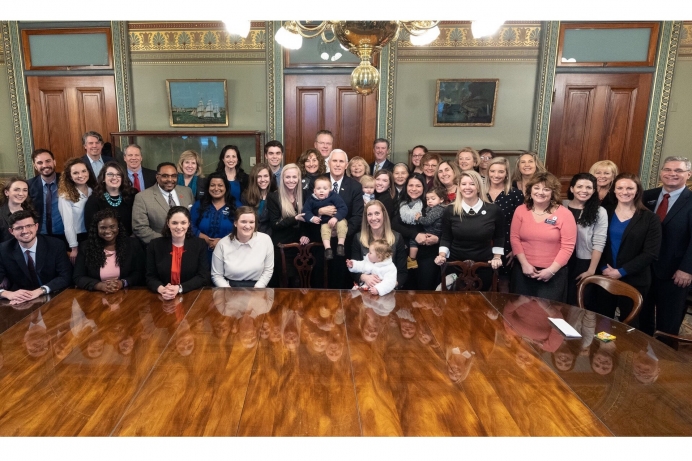 Heartbeat International and Students for Life meet with VP Mike Pence ahead of the March for Life. Photo: Official White House Photo by D. Myles Cullen*

Not bragging (well, yes, I am), but I met with Vice President Mike Pence in his office the day before the March for Life.

“I” didn’t meet with him. Sure, I met him. But there were—by my best count—33 people in the room, not including his aides. My portion of the meeting with Mr. Pence was his kind handshake (he shook everyone’s hand) and my in-depth monologue, “It’s a pleasure to meet you, Mr. Vice President.” He responded with something similar—without the “Mr. Vice President” part—and moved on to give everyone the same opportunity.

The truth is, Heartbeat International’s Babies Go to Congress team was one of two groups (we joined Students for Life of America and its founder, Kristan Hawkins) which met with Vice President Mike Pence in his office Thursday afternoon before Friday’s March.

My “key” role was to sit in what Mr. Pence jokingly called “The Cheap Seats,” behind one of our courageous moms (Elisa and her baby Lissy). If Lissy got too fussy, I was to slip her out of the room and into the reception area. This was fine with me, because being in the room more than enough. 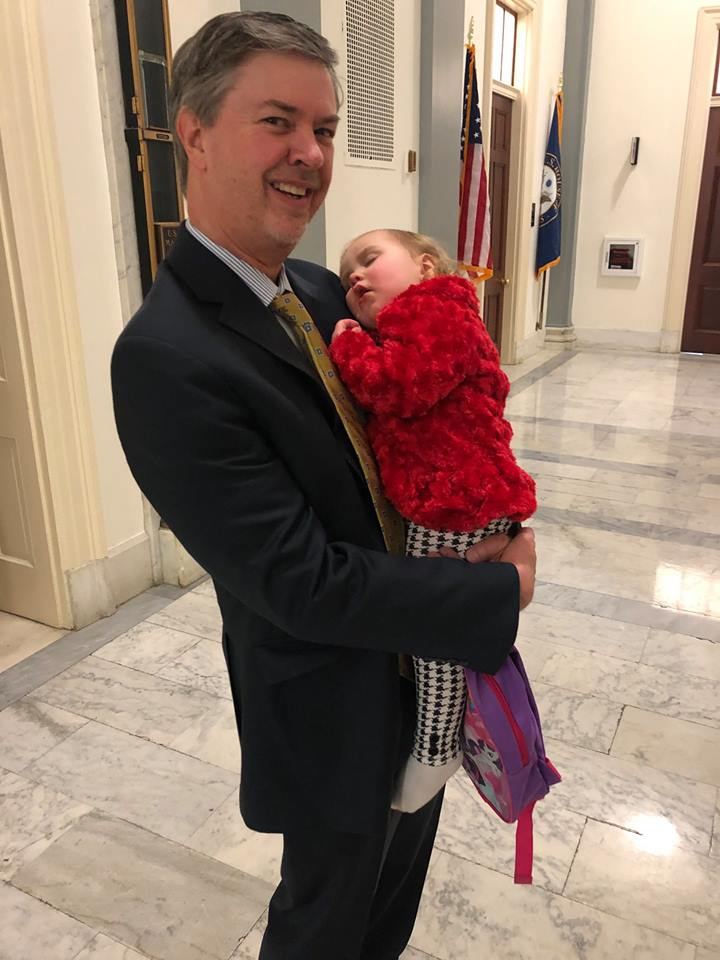 Because my seat was straight across from Mr. Pence—and because Lissy (an expert at crayon tossing, by the way) more than held her own during the round-table discussion—I never had to leave, giving me a perfect view of four characteristics which empower us to best serve those we see.

The Vice President joined us at 3:15, shared a few thoughts on why the issue of life is important to him, then turned the discussion over to those around the table. He never seemed rushed as fourteen students, moms, and the leaders of these two organizations shared their thoughts with him.

The meeting itself lasted more than an hour and at some point, I thought, “Doesn’t he have other places to be?” I don’t know the answer to this question, but I do know this: Mr. Pence appeared to have all the time in the world for each of us.

No rush. No worries. No pressure. Everyone was at ease because the Vice President took the time.

What a lesson. When we take time with our patients and clients, their respect level for us soars. Let’s keep this up—because it matters.

As students and moms shared their stories with the Vice President, his eyes locked on each one—a sure sign that he is either a great actor or a truly good listener. I choose the latter, because with each story he shared a brief comment, affirming the speaker. Then, he would pause, staying focused on the speaker, just in case she or he had another comment. He could have jumped quickly from person to person. He didn’t.

When we stay focused on our client and listen intently (instead of just waiting for our turn to talk), we gain respect. It’s a difference-maker.

3. Give More Than Expected

After Heartbeat International President Jor-El Godsey wrapped up the round-table discussion, Mr. Pence asked for questions—even from those of us in the Cheap Seats. He didn’t stop at one or two but kept asking for more. When the questions subsided, the Vice President walked through the room shaking hands, holding babies, signing Official Children’s Coloring Books (yes, that’s a thing) and chatting with whoever approached.

Once invited, we expected an audience with the Vice President. But because of his position, most of us expected him to give us what short time he could, then to move to another group. He gave more. Much more.

Our clients expect us to treat them with dignity and respect. But when we give them more—whatever that “more” might be—we gain even more trust.

4. Pray for Our Enemies

One of the Students for Life described a confrontational incident he experienced, then asked the Vice President how he deals with those who attack him politically. Mr. Pence paused, then began his answer with a simple truth. “Pray for your enemies,” he said.

Tweet This: VP Mike Pence's advice for dealing with confrontation? “Pray for your enemies.” @KirkWalden @VP

There was more. The Vice President talked of his prayer journal at home, where he has pages for his family members and how to pray for each, and for those he knows facing sickness. There were other categories, but the one which stood out was his list of those who oppose him—his political “enemies.”

“It’s a long list,” he said with a chuckle, drawing laughter. But then he turned serious. “But they’re created by God, too,” he told us. He went on to talk about why—and how—he prays for them. He doesn’t pray for their destruction or for personal victory, he prays for them. There’s a difference, and he sees it.

In today’s world, where Twitter wars rage and the snappiest retorts win instant notoriety (and social media followers), the Vice President reminds us of what should be one of our most salient characteristics: We love our enemies enough to pray for them. When we do, we win—regardless of the results we see.

I don’t know if I’ll ever again be part of a group which meets with such a high-ranking official (thanks for the opportunity, Heartbeat International). But if I do, I might just pray for a spot in the Cheap Seats. There’s a lot to learn back there.

Tweet This: Here are 4 Powerful Lessons from @VP Mike Pence, as told by @KirkWalden.

*Editor's Note: This photograph is provided by THE WHITE HOUSE as a courtesy and may be printed by the subject(s) in the photograph for personal use only. The photograph may not be manipulated in any way and may not otherwise be reproduced, disseminated or broadcast, without the written permission of the White House Photo Office. This photograph may not be used in any commercial or political materials, advertisements, emails, products, promotions that in any way suggests approval or endorsement of the President, the First Family, or the White House.