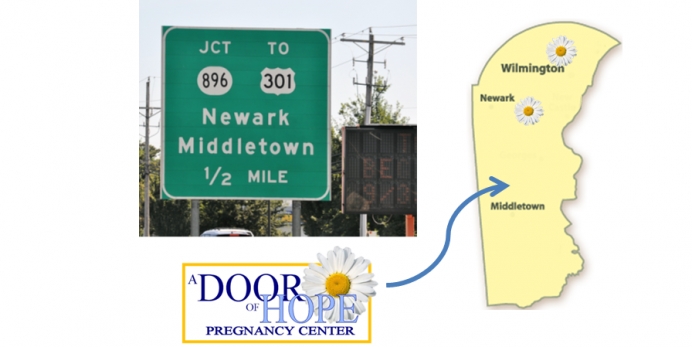 A Door of Hope Widens Reach with Third Location

When A Door of Hope opened its third pregnancy help center Oct. 12, the staff began the day praying for their first potential client.

No advertising had been done for the new center located in Middletown, Del., but that didn’t stop a young woman experiencing an unplanned pregnancy from walking through the door just after the staff said “amen.”

“We had some prayer time for our small staff around noontime, and then we had our first walk in client at 1:15,” Carol Doherty, executive director of A Door of Hope Pregnancy Center, said. “The Lord blessed us with one of those divine appointments with the ability to see a client the very first day that we're open—with no publicity. So, within the first week of being open we have our first client and our first ultrasound, and that’s without any advertisement.”

The Middletown center expands A Door of Hope’s Delaware-based pregnancy help effort, which also includes locations in Wilmington and Newark. All three centers, conveniently accessed through bus routes, offer services including free and confidential pregnancy testing, pregnancy options counseling, limited ultrasounds, prenatal and parenting classes, and a rewards program in which clients can purchase baby items such as clothing and car seats.

Supported by more than 60 churches, A Door of Hope began over 34 years ago in New Castle County, which is home to about 80 percent of Delaware’s population, Doherty said.

The population of Middletown has been booming in the past several years, and it is now recognized as Delaware’s fastest-growing community. As a result, A Door of Hope made the prayerful and prudent decision to add its Middletown center sooner rather than later.

“Middletown is the third-highest populated area in our entire state, and it's projected to be the highest populated area in the state of Delaware in the next 10-15 years, so the projected growth of that area is so compelling,” Doherty said.  “We thought if we're able to generate the enthusiasm, the motivation by our community to help us get to Middletown today, we can afford it today, because the cost in the area will be less now than it is 10 years from now.”

Mary Lou Warwick, center supervisor for the Middletown location, said she feels tremendously blessed to have the opportunity not only to support women facing unplanned pregnancy, but to lead the new campus in and for a community she holds dear.

“It’s been very exciting, partly because I am from the area and the area has just exploded in growth,” Warwick said. “I’ve already known of the need for a center like this in our area, so from that standpoint it was just exciting to know that there would be a center that could service the women in this area.”

Warwick, who served as a peer counselor at A Door of Hope for several years, wants women who are facing an unplanned pregnancy and other overwhelming circumstances to know that when they feel inadequate or alone, community help is available to them.

“We help out with housing referrals and medical referrals—anything that they might need—because unplanned pregnancies, seldom is that the only issue the young women are facing,” she said. “Sometimes there's interruption in school, sometimes they're going to be looking for housing, sometimes they're unemployed or they don't have adequate healthcare, so we are tapping into all those resources so we can help these women and address them holistically.”

Now open Monday-Thursday from 9 a.m. to 4:30 p.m., Warwick and Doherty say the new Middletown location is just a continuance of A Door of Hope’s life-affirming legacy throughout Delaware. Doherty, who has led A Door of Hope as executive director for eight years, says she is often amazed at the testimonies she receives not only from former clients, but from the children of former clients who are now parents themselves.

“We had a woman who came in and said, ‘My mom came here 25 years ago and now I'm having my own children, so here are some items I want to donate to you,’” Doherty said. “To me, it's when you see the generational impact of a pregnancy care center and you see the legacy of all of those years prior to me starting with A Door of Hope that it’s really a privilege to be a part of something deeper than just my tenure.”

One main challenge for any pregnancy help organization considering adding more pregnancy centers is being able to secure the financial foundation needed to keep multiple centers running over time.

The, at times overwhelming, needs of expanding services are just another reason to pray expectantly and step out in faith, Doherty says.

“We didn't wait to have the financial foundation to open up [the new center],” she said. “We felt compelled, and we had the ability to start a third center. Now we've got the prayer and outreach to our community to keep us there.”

“If we would have waited for adequate resources, we would never have had the privilege of inviting [our first client] into our center and being there for her baby.”

Warwick said their first client is planning to parent and has already signed up to start free Hope classes, which promote “good health and confident parenting.”

“Our learning programs go from prenatal care all the way up to toddler, and it has allowed us to deepen those relationships with women so that we're involved in their lives and supporting them, not just during the pregnancy, but out to when the child is 2 or 3 years old,” she said.

Warwick and her fellow staff member at the new location—a client services administrator—are looking forward to walking alongside many more women in Middletown and surrounding areas throughout their pregnancies and into motherhood.

“This is going to be a partnership with them that's long-lasting, and I think that’s how we'll best serve the community,” she said.