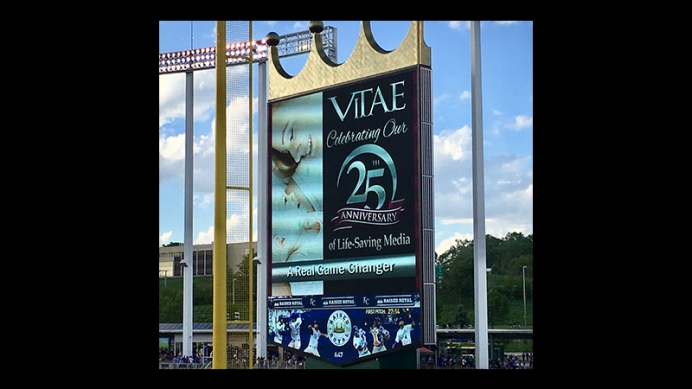 As the old saying goes, “If you throw a rock into a pack of dogs, you’ll know which one you hit by where the yelps come from.”

In Kansas City, abortion absolutists at Planned Parenthood and UltraViolet—an online petition group—are now entering their second month of a cyber-yelping campaign against the Kansas City Royals. The activists are outraged at ads purchased by the Vitae Foundation, a group that works with pro-life pregnancy centers to reach clients with life-affirming help.

As reported Saturday morning by the Kansas City Star, UltraViolet delivered 50,000 signatures to the Royals’ Kauffman Stadium ahead of Friday night’s game, demanding that the Major League Baseball team discontinue radio and stadium scoreboard ads for Vitae, which UltraViolet describes as, “a leader in the anti-abortion movement that is known for manipulating and lying to women who seek abortions, and promoting extreme anti-choice propaganda.”

The offending scoreboard visual has a picture of a mom and a baby with the words, “Vitae: Celebrating Our 25th Anniversary of Life-Saving Media. A Real Game Changer.”

Here’s the text of the radio ad that has drawn over a month’s worth of outrage from UltraViolet and Planned Parenthood:

Before the start of every game, there must be a plan. It can be the difference between winning or losing. The Vitae Foundation gets it. Their well-executed game plan combining right-brain research with targeted media strategies reach women facing unplanned pregnancies and help them find life-saving pregnancy help centers. That’s a solid game plan with a winning strategy. That’s Vitae. Life: The game we must win. Check it out at AdsForLife.org. This message brought to you by the Vitae Foundation.

Vitae, which works with over 130 pregnancy help centers throughout the U.S. to improve their marketing efforts to serve more women and famlies, is not the only pro-life group whose ads are being targeted by the same abortion activists in Kansas City.

In May, the same Planned Parenthood staffer who is leading the charge against the Royals pressured a local radio station into reneging on its deal with an ultrasound-equipped pregnancy center just across the street from Planned Parenthood’s abortion business.

Tweet This: Here's a perfect illustration of why #abortion is losing ground fast. #prolife @VitaeFoundation

While Planned Parenthood has played a key role in applying pressure to the Royals to cancel their deal with Vitae, UltraViolet—a leftist platform run by a former MoveOn.com staffers—has risen to the fore in the fight against Vitae and its life-affirming message.

Leveraging local and national media—USA Today reported on the issue June 6—UltraViolet has gone as far as to fly airplane banners over the stadium during at least one home game, reading in all-caps, “ROYALS FANS DESERVE TRUTH–DROP VITAE.”

Almost stranger than fiction, in Saturday’s Star coverage, UltraViolet and Planned Parenthood are crying foul that the Royals discriminated against them by denying their ad while running Vitae’s ad instead, presenting a tilted double-standard in favor of the pro-life organization.

Here’s the rejected ad UltraViolet submitted to the Royals:

Crisis Pregnancy Centers lie to women, spreading falsehoods that abortion causes breast cancer or may affect a future pregnancy. These lies have real consequences that hurt Kansas City women and families.  That's why the Kansas City Royals partnership with the Vitae Foundation - a group that funds these dangerous centers - is so disturbing. The Royals should stick to baseball - and stop going to bat for extremists. Paid for by UltraViolet Education Fund."

Not exactly what you’d expect to hear on the radio in between innings, but then again, peanuts and Cracker Jack probably aren’t the snack of choice at either Planned Parenthood or UltraViolet.

For its part, the Royals’ marketing department has held the line on its original deal with Vitae despite the constant yelping of abortion fanatics in Kansas City. That’s good news for women and families the Vitae Foundation exists to serve, bless and build, and it’s good news to Royals fans who just want to listen to a ballgame.

In fact, the abortion lobby’s present yelping is the best evidence of just how effective Vitae and the rest of the pregnancy help community’s work really is in Kansas City, as well as throughout the rest of the world.