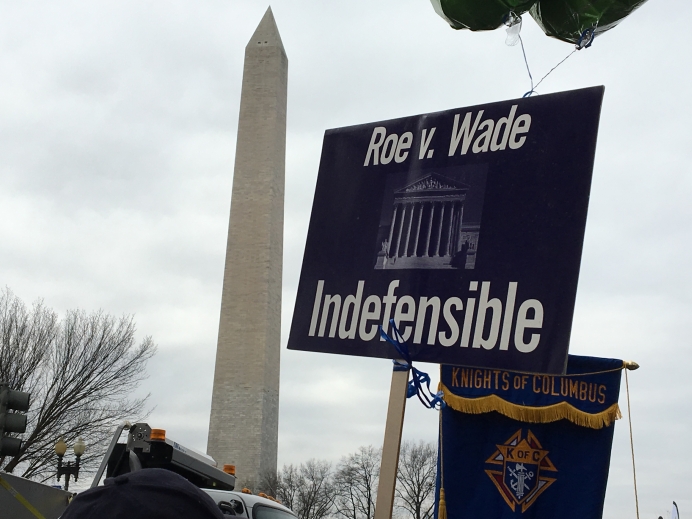 Abortion on demand – No matter what

While many in the pro-life community are eagerly waiting for the reversal of Roe v. Wade, abortion supporters are actively working to find ways to enshrine abortion in the law.

Pro-life legislators and other supporters of life know that Roe v. Wade is in danger, but we’re not the only ones. In fact, even Planned Parenthood admitted in its 2018-2019 annual report that there is a chance that Roe v. Wade could be “…overturned or further eroded.”

One ongoing effort toward legal protection of abortion on demand with little or no restrictions is HR 2975, the “Women’s Health Protection Act of 2019.”

This Act, colloquially known as the “Abortion on Demand Act” would eliminate pro-life legislation, at both the state and federal levels, and enact a national policy that would allow for elective abortion up until the moment of birth.

The law would not allow for protections such as limitations on late term abortion (when the child could survive without the mother), informed consent laws, and even safety standards for abortion facilities.

The legislation's introduction states its intent, “To protect a woman’s ability to determine whether and when to bear a child or end a pregnancy, and to protect a health care provider’s ability to provide reproductive health care services, including abortion services.”

Reading the text of the bill uncovers some disturbing, and very concerning elements to this “protection.”

Tweet This: Reading the text of the “Women’s Health Protection Act of 2019” uncovers some disturbing, and very concerning elements to this “protection.”

First, under “findings” the authors of the bill assert that access to abortion is “…essential to women’s health and central to women’s ability to participate equally in the economic and social life of the United States.”

The Dublin Declaration (on Maternal Healthcare, a 2012 international statement signed by medical practitioners and students recognizing the fundamental difference between abortion and necessary medical treatments)  tells us that there is no medical reason for an abortion.

Further, this bill clearly states that it would allow for abortion for almost any reason. It certainly isn’t limited to preserving the health of the mother.

Additionally, there is no reason to think that pregnancy would significantly, or permanently, affect a woman’s ability to participate in “economic and social life.” There are many protections afforded to pregnant women that would allow them to continue their education, retain scholarships, obtain employment, and continue in their chosen career.

Not only are women protected legally, they have access to a tremendous network of pregnancy help organizations nationwide that stand at the ready to assist them in finding medical care, provide them with maternity and baby items, and even help with expenses such as rent and utilities.

Tweet This: "Women have access to a tremendous network of pregnancy help organizations nationwide that stand at the ready to assist them"

Further into the bill it states, in Sect. 4 under “Findings,” that abortion is comparable to other gynecological services such as endometrial ablations, dilation and curettage for reasons other than abortion, hysteroscopies, loop electrosurgical excision procedures, etc.

The authors of the bill fail to note that none of these other procedures end a human life, which is the only objection that many in our nation have to abortion.

Under the “Purpose” section of the bill the authors state that the purpose is to allow “health care providers” to provide abortion services “without limitations or requirements that…make abortion services more difficult to access.”

This text means that if this bill became law it would be incredibly difficult, if not impossible, to regulate abortion providers. In fact, any restriction could be met with the objection that it makes abortion services “more difficult to access.”

Under Sect. 4: Permitted Services, the reader will find that this bill would not allow any restriction on abortion services prior to viability, and would allow the “treating medical provider (the abortionist)” to make the decision that a viable unborn baby threatens the mother’s “life or health.”

The definition of “health” is not included in the language of this bill but can certainly be stretched to include any kind of emotional distress.

This Act would supersede all current federal law, and no state or territory could enact a law that conflicts with this law. Further, this law would take effect immediately if it were enacted.

On Wednesday, February 12, 2020, the House Energy & Commerce Subcommittee on Health held a legislative hearing to consider this law.

Many of these pro-life witnesses spoke eloquently and passionately, but one in particular stands out.

Ms. Georgette Forney spoke not just as a pro-life advocate, but as a mother who has been through an abortion of her own.

She shared her story, the story of a scared, overwhelmed, 16-year-old who chose abortion “safe” in the knowledge that "a legal procedure couldn’t be wrong."

Ms. Forney speaks for tens of thousands of women when she shares that abortion is unlike any other medical procedure. Abortion is unique in that it destroys an unborn human, forever alters the mother, and damages the fabric of our communities.

Tweet This: "Abortion is unique in that it destroys an unborn human, forever alters the mother, and damages the fabric of our communities"

The names of the members of the House Energy & Commerce Subcommittee can be found online.

These individuals must decide whether the bill is tabled, edited, or sent back to the committee for potential approval.

This bill could have devastating consequences for all Americans, born and unborn, and it reminds us that the pro-life community must be ever vigilant.

Editor's note: From a Charlotte Lozier Institute paper on the H.R. 2975 iteration of the Women’s Health Protection Act of 2019:

According to the Congressional Research Service, as reported at congress.gov, H.R. 2975 and S. 1645 are “identical bills.”

No Republican lawmaker has sponsored or cosponsored either the House or Senate bill except for Rep. Jefferson Van Drew (NJ-2) who cosponsored the House bill as a Democrat before joining the Republican Party.

The stated purpose of the Women’s Health Protection Act of 2019 is to protect the ability to perform and obtain abortions.

Sarah Bowen is the Executive Director of Promise of Life Network, a life affirming organization including pregnancy help, parenting support, and abstinence education with locations in Slippery Rock, New Castle, and Sandy Lake, PA. She began working in the pro-life movement as a college intern at the organization (then known as Habakkuk Pregnancy Resource Center) in 2008, and has been the executive director since 2014. Sarah and her husband Anthony have been married for 12 years and Anthony stays home with and home-schools their four sons. Sarah graduated from Geneva College with a bachelor’s degree in Human Services and a minor in Business and is currently working towards her MBA. Her first book, Courageously Pro-Life, and other resources for pregnancy centers are available on her website, sarahmbowen.com. When Sarah isn’t working to end abortion she can be found knitting, riding her razor scooter, bicycling, and spending time with her family.