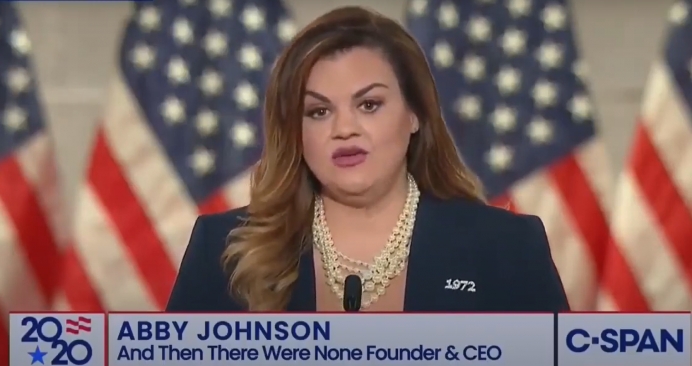 Abortion was in the spotlight Tuesday night at the second evening of the Republican National Convention (RNC) as former Planned Parenthood Director Abby Johnson gave a frank description of the procedure and pro-life teen Nicholas Sandmann shared how he was defamed after expressing support for Donald Trump as a pro-life president.

In telling her story Johnson also offered a glance into the abortion industry’s callousness.

Johnson recounted for the convention audience how she came to work for the nation’s largest abortion provider, and also the factors she said changed her view that by working for the abortion giant she was being a help to women; Planned Parenthood’s annual award named for its infamous founder Margaret Sanger, the organization’s abortion quotas and her taking part in an ultrasound-directed abortion on the job. The latter was the basis for a pivotal moment in the movie Unplanned, based upon her memoir.

“Nothing prepared me for what I saw on the screen,” Johnson told the RNC, “an unborn baby fighting back, desperate to move away from the suction.”

She continued: “And I’ll never forget what the doctor said next: ‘beam me up, Scotty.’ The last thing I saw was a spine twirling around in the mother’s womb before succumbing to the force of the suction.”

Johnson, herself post-abortive, left the abortion industry and became a pro-life activist. Johnson founded and runs And Then There Were None, assisting abortion workers who want to leave the industry, and is a frequent speaker and commentator.

Her address to the RNC is being termed blunt, groundbreaking and powerful, and praised for exposing the grim reality of abortion.

Johnson shared specifics of piecing infant corpses back together after an abortion to confirm there were no remains in the mother’s womb, and how she and other abortion workers joked that they labeled the “products of conception”(POC) room where this took place the “pieces of children” room.

“For most people, abortion is abstract,” she said. “They can’t conceive of the barbarity.”

Tweet This: “For most people, abortion is abstract, they can’t conceive of the barbarity” - Abby Johnson

Johnson went on to say she supported Trump’s reelection because he has done more for the unborn than any other president, citing his reinstating of the Mexico City Policy, reversing an Obama-era regulation prohibiting states from withholding money from abortion facilities, appointing pro-life judges and establishing a new rule protecting healthcare workers’ conscience rights.

Her RNC address comes as a Congressional investigation into Planned Parenthood’s fetal tissue practices has not produced charges and the Center for Medical Progress (CMP) group continues to release damning footage of the abortion giant’s executives discussing the harvesting of fetal body parts.

Johnson’s frank description of abortion and its handling by industry workers, along with Trump’s bluntness describing late-term abortion in the final debate during the 2016 campaign represent a more direct abortion narrative than previous GOP campaigns.

At the last debate in 2016 Trump had blasted then candidate Hillary Clinton for her support of the procedure, saying:

In his RNC address Sandmann shared how after taking part in the 2019 March for Life he’d bought a Make America Great Again hat because Trump had proven to be one of the most pro-life presidents in U.S. history and he wanted to express his support for him.

Sandmann said he could not have imagined that the simple act of putting on that hat would unleash such hate toward him and make him the target that it did from the news media.

Enabled by incomplete video footage and complicit media, Sandmann was cast as the smirking, “privileged” and bigoted aggressor in the now infamous January 18, 2019 encounter near the Lincoln Memorial, and became the immediate object of intense defamation and death threats.

“My life changed forever in that one moment,” he said. “The full war machine of the mainstream media revved up into attack mode.”

Sandmann has since sued several media outlets and individuals for their actions related to his involvement in the incident, settling with CNN and the Washington Post. Other lawsuits are pending.

He denounced cancel culture and media willingness to participate in it in his RNC address, pointing out how Trump is the constant target of biased media reporting and calling for a return to “objective journalism.”

“I believe we must all embrace our First Amendment rights, and not hide in fear of the media or from the tech companies or from the outrage mob, either,” Sandmann stated. “This is worth fighting for.”

Tweet This: "I believe we must all embrace our 1st Amendment rights, & not hide in fear of the media or from the tech companies or from the outrage mob"