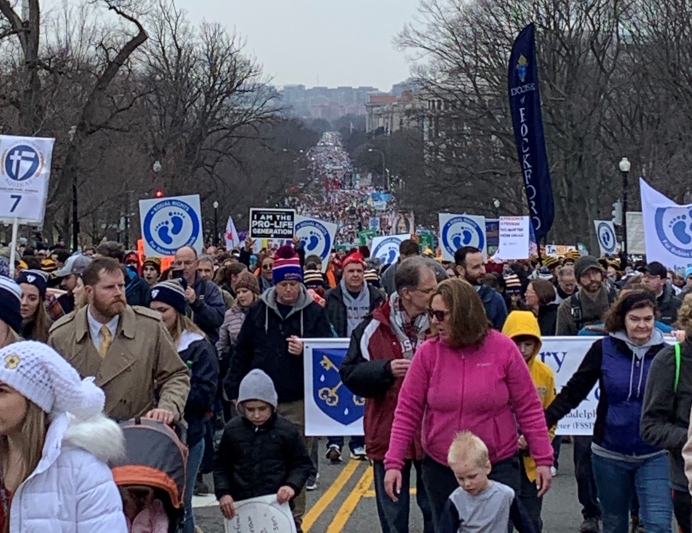 The 2020 March for Life in Washington D.C. Lisa Bourne

The March for Life Education and Defense Fund, the organization behind the annual March for Life in Washington, D.C., said the decision was made due to the ongoing COVID-19 pandemic and the risk of unrest in the nation’s capital. This year’s march, now virtual, will take place Jan. 29.

In a Jan. 15 statement announcing the decision, Jeanne Mancini, the president of the March for Life, said, “The protection of all of those who participate in the annual March, as well as the many law enforcement personnel and others who work tirelessly each year to ensure a safe and peaceful event, is a top priority of the March for Life.”

“In light of the fact that we are in the midst of a pandemic which may be peaking, and in view of the heightened pressures that law enforcement officers and others are currently facing in and around the Capitol, this year’s March for Life will look different,” Mancini said. “The annual rally will take place virtually and we are asking all participants to stay home and to join the March virtually.”

Tweet This: “The March for Life annual rally will take place virtually and we are asking all participants to stay home and to join the March virtually.”

The COVID-19 pandemic continues to spread, with over 383,000 deaths to date in the United States, according to data from the Centers for Disease Control. Meanwhile, Washington, D.C. faces the aftermath of the deadly riot at the U.S. Capitol on Jan. 6.

The march will still happen, Mancini said, but in-person attendance will be confined to a small number of pro-life leaders who will represent the movement.

“We will invite a small group of pro-life leaders from across the country to march in Washington, DC this year,” she said. “These leaders will represent pro-life Americans everywhere who, each in their own unique ways, work to make abortion unthinkable and build a culture where every human life is valued and protected.”

A representative for the March for Life told Catholic News Agency that this small group of pro-life leaders will carry roses with them, which they will leave at the Supreme Court, in honor of the lives lost to abortion.

The March for Life, which organizers describe as the world’s largest annual human rights demonstration, takes place every year on or near Jan. 22, the anniversary of Roe v. Wade, the 1973 Supreme Court decision that legalized abortion nationwide.

As of Friday, law enforcement officials locked down huge portions of the nation’s capital city following the attack on the U.S. Capitol building last week and in anticipation of the inauguration of President-elect Joe Biden on Jan. 20. The National Mall is closed to the public through at least Jan. 24, just days before the planned March was to take place on Jan. 29. According to the Associated Press, the number of National Guard troops in Washington to secure the locked down area is about 21,000.

Mancini told Catholic News Agency, “I welcome the prayers of my fellow Catholics during this unique moment in history as we work together to build a culture of life in our country. ‘With God all things are possible.’”

Editor's note: This article was published by Catholic News Agency and is reprinted with permission. The full March for Life statement can be seen HERE.