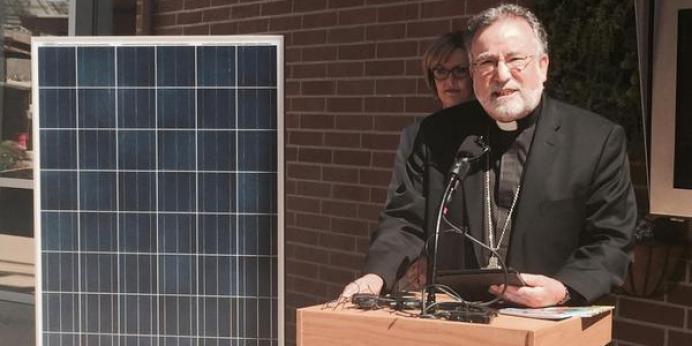 As members of the California State Senate prepare for a potential vote on Assembly Bill 775, the bishop of the Diocese of Sacramento, Jaime Soto, weighed in on the legislation that could be up for a vote as early as Thursday.

Bishop Soto's opinion piece, "Crisis pregnancy centers face an underhanded assault," which ran in Tuesday's edition of the Sacramento Bee, made the case that it's Planned Parenthood, not life-affirming pregnancy centers, who is guilty of evading the facts and should have to answer for the evidence of its own unethical, illegal activities that have been most recently exposed by the Center for Medical Progress' undercover work.

Bishop Soto compared the CMP's videos to an "undercover report" from NARAL Pro-Choice California that, while failing to establish its own charges with facts, has served as the foundation for A.B. 775's progress through the California State Assembly, along with a state-sponsored strategic document that advises pro-abortion lawmakers on how to skirt First Amendment requirements while shutting down locally funded pregnancy help organizations.

Tweet This: The "fact" shoe is on the wrong foot. #DefundPP #PPSellsBabyParts

This undercover operation became the lame pretext for NARAL and Planned Parenthood’s attempt to push legislation – Assembly Bill 775, the so-called Reproductive FACT Act – that would fine clinics that don’t provide abortion information or referrals. But the bill would not require Planned Parenthood or other abortion providers to provide women with information on healthy and supportive alternatives to abortion.

What the Planned Parenthood videos have revealed is that crisis pregnancy centers are not the ones withholding information from vulnerable women or an unsuspecting public. Planned Parenthood has consistently hidden the morally repulsive aspects of its mission.

The law will force 75 state-licensed free ultrasound facilities, to give each of its clients the following disclaimer, which includes the phone number of a county social services office where a client could obtain an abortion covered by Medi-Cal.

The notice, which the law specifies must either be posted as a public notice in “22-point type,” “distributed to all clients in no less than 14-point font” or distributed digitally “at the time of check-in or arrival,” applies to all pregnancy help medical clinics licensed by the state.

Pointing out that California is one of just two states (along with Maryland) that does not record abortion statistics, Bishop Soto also called into question the intentions of the bill's supporters, concluding that "the 'fact' shoe is on the wrong foot."