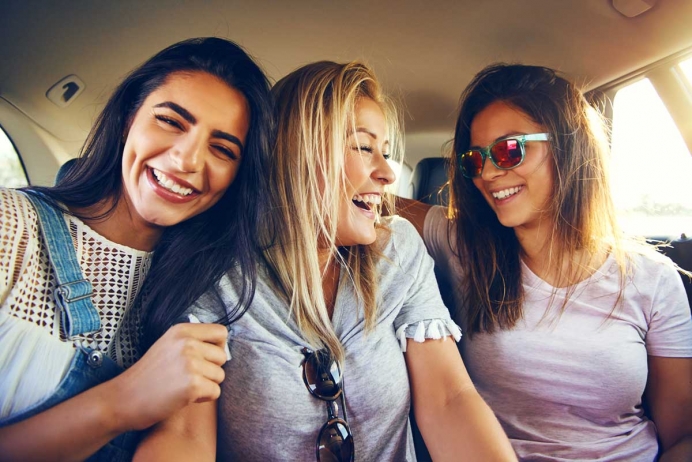 Eighteen-year-old “Courtney” was distressed at her positive pregnancy test. Her mother had already warned her that if she ever got pregnant, she’d kick her out of the house and cut off her college money.

Courtney’s best friend told her, “You better not get an abortion!” But her boyfriend said, “Just destroy it. Otherwise, we’re done.”

At our pregnancy help clinic, we listened as Courtney shared her concerns and inner conflict. We provided her with accurate information about abortion. We also provided a free ultrasound so she could see how far along she was and make an informed decision.

Courtney chose life for her baby. She attended college with the help and support of her mom, who became a doting grandma to her little girl. Courtney and her boyfriend broke up, but he, too, fell head-over-heels in love with his daughter and became a supportive dad.

One of the brightest blessings in this whole scenario is the way Courtney herself began to flourish. Initially a girl without a voice who wouldn’t even look me in the eye, she blossomed into a confident, courageous young woman.

When Courtney came back to introduce her baby girl to us, she said, “You guys are the only ones who didn’t push me. Everyone else told me what I should do. But you didn’t push. You let me decide.”

By informing Courtney of her pregnancy options and providing emotional support, did we take away her ability to make a good choice? Did we lie to her or manipulate her? Did we benefit financially from her decision?

Does Courtney regret having visited a pregnancy center instead of an abortion clinic?

Yet abortion proponents would love for people to believe pregnancy centers are guilty of all sorts of questionable motives and deceptive tactics. (Whenever you point a finger, several of your own fingers point right back at you. Just saying.)

“Madison” was a bright, highly motivated graduate student—at least on the surface. When she came to see us for post-abortion recovery, she had dropped out of her studies.

Madison had been devastated by the positive pregnancy test. Her parents were very religious, and she was afraid of their reaction. Her relationship with her boyfriend was falling apart.

She felt utterly alone. Fear drove her to an abortion clinic.

Afterward, Madison kept the abortion under the radar. She planned to return to her studies and go on with life, unhindered by a baby. She would accomplish her goals and put this secretly terminated pregnancy behind her.

What she didn’t anticipate is how badly the abortion would derail her.

Too distracted by guilt and grief to focus on schoolwork, Madison dropped her classes. When she came to us for help, she was still terrified her parents would figure out what happened and toxic with bitterness toward her ex-boyfriend.

Did abortion empower Madison? Did it “control+alt+delete” her unplanned pregnancy as if it had never happened? Did it help her to accomplish her goals and feel good about herself?

Hardly. It brought her life to a screeching halt. It undermined the very goals she was trying to pursue. It left her feeling stuck, sick at heart.

Meanwhile, somebody made a buck at Madison’s expense—and it wasn’t a pregnancy help center.

So does abortion empower women?

Meriam-Webster’s dictionary defines “empower” as “to promote the self-actualization or influence of.”

In order to empower women, we work to ensure basic rights for them such as voting, getting an education, and receiving fair wages. We seek to release them from systemic oppression and injustice.

I’m very grateful to be living in this nation today. Many women over the course of history (and around the globe right now) have experienced far fewer rights and freedoms than I. Empowering women around the world leads to the flourishing of communities and nations. It’s a worthy cause, one that pleases God.

That said, the discussion about women’s rights must take its place inside the broader topic of human rights. All of God’s image-bearers deserve fair treatment.  This obviously includes women—but it equally includes the unborn.

Tweet This: The discussion about #womensrights must take its place inside the broader topic of #humanrights - @susannemaynes

Abortion proponents claim that abortion empowers women because it frees them from having to carry, bear, and raise children they weren’t planning on, thus allowing them to pursue the life they had in mind.

However, we do not “empower” women by offering them the legal right to end the lives of their unborn children. Abortion violates human rights—and the intentional killing of her preborn baby does not promote the self-actualization of a woman.

It does not help her. It harms her.

To those of you who are truly empowering women, keep up the good work. You know who you are.