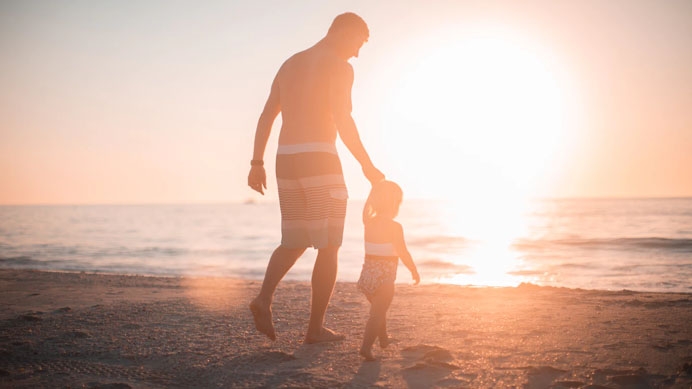 “Mike” answered to no one.

His job situation was in a constant state of flux. Every time he got into conflict with a supervisor or coworker, he would quit his job or make a brash statement that would get him fired.

“It’s not because he’s not smart, it’s not because he didn’t have abilities, it’s because he had really no sense of authority, no respect for authority, no willingness to serve under the authority of someone else,” said Jonathan Bright, founder of Faith for Fathers and leader of Dad-to-Dad, a program at Carolina Pregnancy Center in Spartanburg, South Carolina.

“It’s probably because he never had it in his life—no one’s ever really taught him,” Bright said. “He never really understood why you have to function under someone else’s authority. We all do.”

But that all changed when Mike’s girlfriend (now wife), “Melissa,” a client at the Carolina Pregnancy Center, heard about the center’s Dad-to-Dad program and recommended it to Mike. They had one young child at the time.

The Dad-to-Dad program was formed in 2016 as a partnership between Faith for Fathers and the Carolina Pregnancy Center. Bright created Faith for Fathers in Spartanburg in 2013 to help dads build a godly legacy through events catered to them and their children, and monthly luncheons connected to family devotions.

“Our heartbeat is fathers and really trying to get them to recognize the significance of their role and how important their role is and how there’s really no replacement,” Bright said. “Society tries to fill in the gap with coaches and youth pastors and moms and those are great things, but ultimately there’s no replacement for the man being in the home leading his family spiritually and emotionally.”

Tweet This: "There’s no replacement for the man being in the home leading his family." @FaithForFathers @CarolinaPregnan #prolife

Bright is close friends with Alexia Newman, executive director of the Carolina Pregnancy Center. In 2016, Newman came to Bright, asking for help in reaching the boyfriends and husbands of pregnancy center clients.

“We just saw a natural coalition, a natural way to work together—he was working with men already,” Newman said. “He had men that could be mentors to our guys.”

Bright saw the relationship as a perfect fit, too.

“The guys that we deal with at the pregnancy center typically aren’t going to be the kind of guy that’s going to go bring his daughter or son to an event or show up at a luncheon just for dads to learn how to be a better dad,” Bright said. “We saw it as a way to expand our outreach.”

When a man comes to the pregnancy center with his wife or girlfriend, the volunteers gather the man’s contact information so that Bright can connect with him. The Dad-to-Dad program offers one-on-one mentoring, a Wednesday night group meeting, a monthly dinner and Daddy Dollars to use in the center’s Earn-While-You-Learn store.

Men can earn Daddy Dollars by attending the Wednesday night group, attending worship services, or taking their wife on a date or their kids on an outing and sending a selfie back to the center. For Valentine’s Day, each of the dads was given a gift card to take his girlfriend or wife out to the movies or dinner.

When Mike joined the Wednesday evening group, at first, he hardly spoke to anyone. Bright worked on building trust with him and after a few months, invited him to have a Coke one-on-one.

Bright told Mike that every job is going to be imperfect with imperfect coworkers and imperfect bosses. He told him just to focus on being faithful to the tasks in front of him, or else he and his family will never find financial stability. Bright told him that reliable employees have better chances of getting better jobs and making more money.

The conversation had an impact.

The next Wednesday, Bright was shocked to find Mike dressed up with a new haircut. But he had something else that was new too. To the excitement of his fellow dads, Mike announced that he would be leaving group early that evening to start his new job—a temporary position at the Adidas manufacturing company in Spartanburg. The group cheered him on, and within six weeks, he was officially hired through the company for a full-time position with benefits. He has been at the company for two years and is now in a supervisory position.

Not only that, Mike has heard the gospel, and now attends church with his family on a semi-regular basis.

Now, Mike is giving back, sharing his own progress with a new Dad-to-Dad member, “Joe.”

Just a few weeks ago, Joe was down on his luck, jobless, and living in a hotel with his pregnant girlfriend. When Joe joined the Dad-to-Dad group, Mike was there to give him a boost. Not long after Mike told Joe his company was hiring, Joe was offered a position.

“It’s been fun to see what God has done in Mike’s life the last couple of years,” Bright said. “It’s neat to see that come full circle...where he’s able to help assist somebody else.”