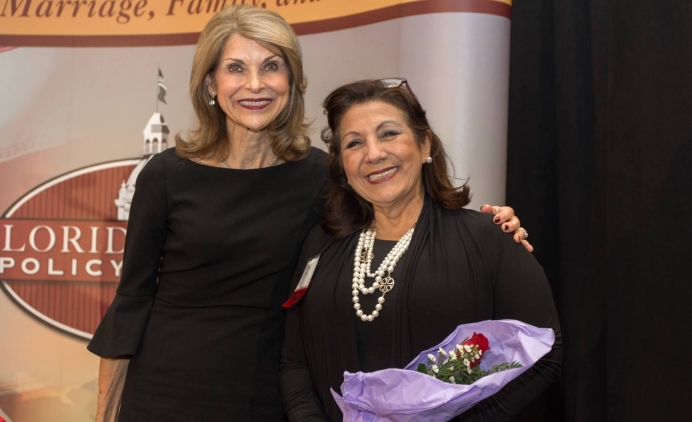 Gathering over 250 supporters and legislators to recognize the state’s unsung heroes in the pregnancy help movement, the Florida Family Policy Council honored 33 women and men who lead pregnancy centers throughout the state in late January.

The banquet, held at the Donald Tucker Civic Center in Tallahassee, represented a fifth of life-affirming pregnancy centers throughout Florida and featured Pam Tebow as its keynote speaker.

Along with the lives rescued through the attendees’ everyday work, the banquet was a fitting occasion to anticipate a bill that passed through the Florida legislature in early February guaranteeing up to $4 million per year to pregnancy centers through the state’s Department of Health.

“I’ve had it in my heart for many years to do something like this,” Florida Family Policy Council president John Stemberger said. “The fact that we were able to get Pam Tebow to be involved and that the legislature had a permanent $4-million-dollar appropriation for pregnancy centers was also a plus in the dynamic for doing it this year.”

Martha Avila, president of Heartbeat of Miami was among those honored. Since she helped establish the area’s first center—among 37 abortion businesses—in 2007, Avila’s group has blossomed into a five-location organization that bought out two closed abortion mills where now serves women with free ultrasounds, material aid and options counseling.

In all, 35,000 women and counting have chosen life for their children after having visited Heartbeat of Miami.

“I was very encouraged to see state officials there, listening to what the pregnancy help clinics and centers in our state do,” Avila said. “It's good to let them know all the things we're doing, promoting life, promoting families, promoting all the things that come when families stick together.”

Governor Rick Scott is expected to sign the bill, which would go into effect on July 1 this year.

“Up until now, our program has simply been a budget line item and had to be approved every year,” Susan Grimsley, executive director of the Florida Pregnancy Care Network, said. “Being in statute gives the program much more permanence.”

Avila’s five locations across Miami-Dade County began under the leadership of Heartbeat International’s then-development director, Rev. John Ensor—now head of PassionLife Ministries. In an area besieged by the abortion industry, women were trying to get into Avila and Ensor’s first clinic in Hialeah months before the doors even opened in July of 2007.

“The first baby we saved, I was talking to her mom in my little kitchen because we didn't have a clinic yet,” Avila said.

Now Heartbeat of Miami serves women in four locations—southernmost in Kendall, one in North Miami, another in Little Havana and the original in Hialeah—as well as a training center co-located with her administrative offices.

Tweet This: "In #Florida, we want honor, respect & revere those who work to save the lives of women & their unborn children." #prolife

But keeping these successful clinics funded is challenging. Just after the North Miami clinic opened in 2008, the economy took a nosedive, and Avila had to lay off her entire staff.

Incredibly, that didn’t slow Heartbeat down.

“Our employees still reported to work,” she said. “They volunteered for five months. The clinics stayed open because there was a line of pregnant women, and when our staff saw that, they thought, ‘How do we turn them down? How do we say no?’”

Eventually, Heartbeat of Miami was buoyed by the Florida Pregnancy Support Services Program, which enabled Avila to not just meet the current payroll, but to expand further into the community.

Rendering to Caesar what is Caesar’s

Currently, Avila’s clinics are part of 106 pregnancy help locations participating in the program, which allocates $60 per hour for peer counseling and education throughout the first year of a baby’s life. The program also covers uninsured patients for well-woman exams and more, including STI testing for both men and women.

Also included under the program, pregnancy help centers that do not offer ultrasound services can refer their clients to doctors, who then bill the program for medical services.

Grimsley said the program provides tremendous value for women who would otherwise not have access to wellness services. At the same time, pregnancy centers see clients they might not otherwise contact, and benefit from a funding source that’s as flexible as it is beneficial.

“It's there to use when you need it,” she said, noting that the program does not cover particular services that include religious content. “Some centers don't bill their counseling, but they bill their nutrition or Earn While You Learn classes.”

Avila’s faith-based organization has found it easy to provide both the program-funded services and the spiritual help women and their families need. Outside of program-billable hours, over 1,200 women come to faith in Christ in her clinics during 2017.

“We do give to Caesar what is Caesar’s, and to God what is God's,” she said. “And believe me, ‘mystery shoppers’ have been sent our way. But they don't find fault in us because we do exactly what God has instructed us to do.”

All for the Families

This kind of cooperation between state lawmakers and pregnancy center directors for the good of Florida families is precisely what Grimsley enjoyed seeing represented at the January banquet in Tallahassee.

“We were very pleased the Florida Family Policy Council chose to recognize and honor pregnancy centers,” she said. “The men and women who work and volunteer at pregnancy centers are generally the last ones to want accolades for what they do. They're there because they've been called to serve and support families.”

Stemberger agreed. In comments printed in the banquet program, he wrote, “These ladies and men sacrificially lay down their lives … In Florida, we want to be clear that we honor, respect and revere those who work to save the lives of women and their unborn children.”