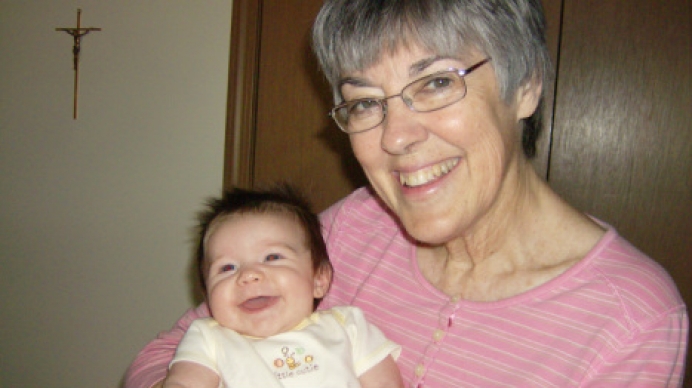 A religious sister who created the first counseling manual in the pro-life field, developed one of the first pregnancy counseling hotlines, and helped to found Heartbeat International has died.

The last surviving co-founder of the world’s largest pregnancy help network, Sister Paula Vandegaer, SSS, passed away Friday, Aug. 13. Details around her death have not been released and arrangements have not been announced by her community, the Los Angeles-based Sisters of Social Service.

A pioneer in the pro-life movement on several fronts, Sister Paula, a member of the Academy of Clinical Social Workers and a licensed clinical social worker, had been performing pro-life work since abortion was legalized in California in 1967.

“It is impossible to overemphasize the influence that Sister Paula Vandegaer has had on the pregnancy help movement,” said Peggy Hartshorn, board chair and former longtime president of Heartbeat International. “She was an essential part of its "birth" in 1971 here in the United States.”

“The legacy Sister Paula left to all of us and our movement is her contribution to our founding principles and values, teaching resources, and professional standards,” Hartshorn said.

Born February 14, 1939, in Kansas City, MO, Sister Paula earned a Bachelor of Arts in psychology from Immaculate Heart College in Los Angeles and a Master of Social Work from the Catholic University America.

She was an author (“Introduction to pregnancy counseling”) and speaker who had helped to form hundreds of pregnancy help centers. She had lectured and conducted counselor training throughout the U.S. and in several countries overseas.

Sister Paula founded International Life Services in 1985, a non-profit that promotes Judeo-Christian values applied to family life, sexuality, and bioethical issues, and she remained its program director until recently.

She also founded Volunteers for Life and Scholl Institute of Bioethics, a nonprofit, Judeo-Christian organization that addresses bioethical issues.

“Sister devoted her entire life to pregnancy help and teaching about the dignity of the human person, from birth to natural death,” Hartshorn said, “first through Heartbeat International (then called AAI), and then through International Life Services from 1985 to present.”

Tweet This: “Sister Paula devoted her entire life to pregnancy help and teaching about the dignity of the human person, from birth to natural death”

When Heartbeat co-founder Dr. John Hillabrand, along with one of his nurses, Esther Applegate, and one of their friends, Lore Maier, also a co-founder of Heartbeat International, were running a pioneering pregnancy “center” out of Hildebrand’s office in 1971, Sister Paula was rescuing women from abortion by talking to callers on the phone. Sister Paula, then a recent social work graduate, organized an early telephone hotline for pregnancy counseling in Los Angeles at that time.

Sister Paula was secretary for the founding board of Heartbeat. Applying counseling and social work principles, she also devoted herself to training and equipping people to be effective counselors.

Treating every woman with unconditional respect and love

Sister Paula taught volunteers how to approach a woman in crisis. She laid the foundation of compassionate and competent client care, based on relationship.

Crisis intervention was new in the counseling profession in the early days of pregnancy help, and Sister Paula authored the first counseling materials ever used specifically for helping women with unexpected pregnancies.

She pioneered this new, specialized field for counseling and social work focusing on women facing unplanned pregnancies, and having birthed the idea of providing immediate and personal pregnancy-related crisis intervention by phone, she helped pave the way for hotlines for crisis intervention.

“Sister was the first social worker and licensed counselor to "translate" these key professional skills into a training manual for non-professionals so that, with utmost respect for the woman, we could listen to her story and explore abortion and abortion alternatives with her, lovingly and nonjudgmentally,” said Hartshorn. “Bits of almost every pregnancy help training program today can be traced to her first Pregnancy Counseling Manual from 1971, developed for the first ever pregnancy help hotline.”

Her manual and training articles emphasized treating every woman who comes for help with an unexpected pregnancy, or after abortion, with unconditional respect and love.

Sister Paula also published the first research on the psychological effects of abortion on women.

She sent a recorded message to the pregnancy help community which was played at Heartbeat International’s Annual Pregnancy Help Conference held in Columbus, OH, in April in conjunction with Heartbeat’s 50th anniversary.

“Thankfully, the Lord allowed her to be part of our celebration of its 50th birthday this year,” Hartshorn said. “As one of Heartbeat's founders, despite her failing health, she sent a treasured video message to all the participants at Heartbeat's International conference.”

“It's been going strong ever since for 50 years and congratulations to all of your centers and all the wonderful work that you've been doing for that fit those 50 years,” Sister Paula said in part. “And God has been with us. God has been starting centers.”

She closed her message by wishing God’s blessings on all. 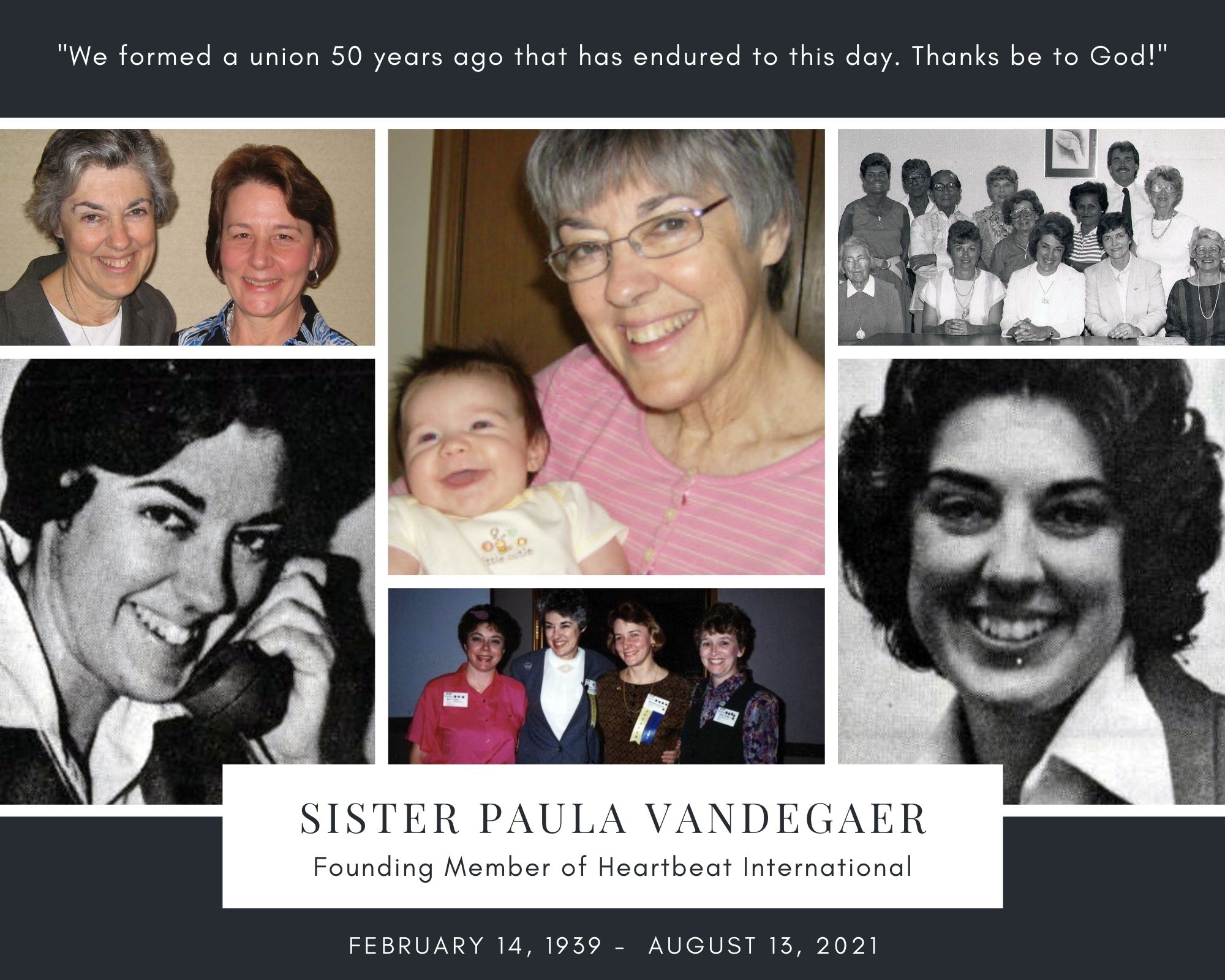 "Sister Paula was the very embodiment that is the hallmark of the pregnancy help movement,” he said, “compassionate, loving care toward a life-affirming outcome.”

“She imbued these qualities into the Heartbeat DNA in its founding and formative years,” Godsey said. “The same will live on in the fabric of the very pregnancy help movement."

"Sister Paula was always so kind and encouraging"

Beth Diemert, director of Affiliate Services for Heartbeat International, said she had great respect for Sister Paula and for her work.

“I have had the privilege of meeting and getting to spend time on a couple of occasions with Sister Paula,” Diemert said. “She was a woman that exuded warmth and Jesus consistently.”

Diemert said that a lot of her understanding of Sister Paula’s contribution to Heartbeat’s formation came through Hartshorn, as she mentored Diemert in her role at Heartbeat early on. And Hartshorn really helped her understand how Sister Paula influenced her thinking and helped her discern what really was needed to help women in unplanned pregnancies in a pregnancy help organization model.

Diemert had the opportunity to read a lot of Sister Paula's writings, she said, and through that she realized how much she related to and agreed with her thinking and philosophy on how to best reach and connect with clients.

“Her understanding of the need to create a relationship with the client and rely on the Holy Spirit to guide you in the interaction really struck home with me and affirmed my contributions at Heartbeat in the same way through the years,” said Diemert.

“Sister Paula was always so kind and encouraging every time I interacted with her,” Diemert added. “Always affirming what we were doing at Heartbeat and speaking encouragement to me in my role of delivering services and resources to our affiliates.”

“She also was just full of life herself,” Diemert said.

“I will never forget a visit to the Focus on the Family campus in Colorado where she went down the slide in the “Whit’s End” play area from their Adventures in Odyssey radio drama in her modified habit, that still was a dress,” said Diemert. “She laughed and giggled with total joy!”

“She fought the good fight”

Hartshorn concurred, stating of Sister Paula, “I will always think of her -- dynamic and almost always smiling.”

“For me, and for many others I'm sure, Sister Paula will always be a hero and role model,” she said, “a servant of the Lord above all else, who modeled purity, Christ-like love for others, quiet authority, love of learning and sharing, modesty, humility, unflagging commitment, and servant leadership.”

“She fought the good fight,” Hartshorn said, “and finished as strong as ever.”