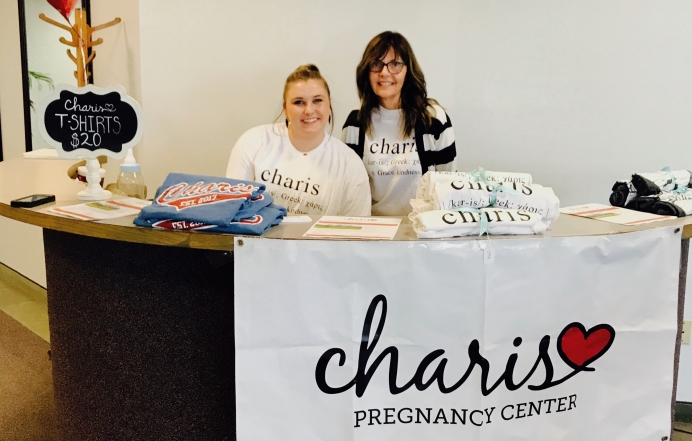 Kimberla Treat didn’t know what a pregnancy center was when she felt God calling her to start one. She just wanted to help women in her community who were facing unexpected pregnancies alone.

In the spring of 2014, Treat was working with a nonprofit in Duncan, Okla., when she came into contact with a pregnant woman who had previously lived in a nearby park. Partly because she was pregnant, and partly because she had a job, the woman didn’t meet the requirements for any of the existing women’s shelters in town.

Treat was shocked to find out the woman had no other place to go, but she was also at a loss for how to help.

“It’s just amazing how God brought everything together,” Treat said. “Before we met to work on the center together, none of us really knew each other. The only explanation is divine intervention.”

The three women and their husbands started meeting in 2014 to plan what would become Charis Pregnancy Center. Another couple joined them, and the group formed a steering committee. After reaching out to local churches and civic organizations for support and partnership over a two-year stretch, Charis’ board of directors purchased an old school building in September of 2016 that hadn’t been used in over 25 years.

“As you can imagine, the critters had taken over,” Treat said. “There were books and cobwebs—it was just a mess. It took a while just to do the demolition on this building.”

Community members stepped up to join Charis in the task of transforming the old building into a pregnancy center. Volunteers came out of the woodwork to oversee and carry out construction, landscaping and help repaint the facility.

When vandals threw rocks and broke a few of the windows of the center, a group of men from a lumber yard in town offered to replace the windows for free.

“I think more people started praying for us after that,” Treat said. “What the enemy meant for evil, God used for good. I think the longer building the center took, the more people were able to be blessed by getting involved. It was a community effort.”

During the rebuilding effort, Treat—who had agreed to chair the board of directors—was on the lookout for an executive director to lead the day-to-day work. As it turned out, the person she found had just as much familiarity with pregnancy centers as Treat had when she first started out. Which is to say, not much.

Only 23 years old and a recent college graduate, Emalee Williams has jumped into the fray with both feet, overseeing the center’s opening in October 2017.

“I said, ‘I’m pretty sure you have the wrong person, I am not qualified for that,’” Williams said. “But it’s right where God wanted me, so here I am. I’d be lying if I didn’t say I wasn’t in over my head, but I rely on the fact that God doesn’t call the qualified, He qualifies the called.”

Tweet This: How one #Oklahoma #prolife center got up and serving.

Charis Pregnancy Center offers pregnancy tests and ultrasounds, a baby boutique and weekly education classes for up to a year after a baby is born. They are hoping to bring education programs into local schools as well.

“Emalee loves, absolutely loves, to get in front of people and talk,” Treat said, “Public speaking is a little bit out of my comfort zone, but Emalee loves doing it. It’s such a needed skill to get people excited about what a pregnancy center is doing.”

Throughout the process of building the center, Treat has seen several conversations open up from women and families who’ve had experiences with unexpected pregnancies.

“It's just so neat to hear everybody's stories,” Treat said. “I talk to women who had an abortion, maybe 45 years ago, but they never told anybody, maybe their mother or their best friend, and they just feel compelled to share it now. I'm excited that Charis is able to minister to those women.”