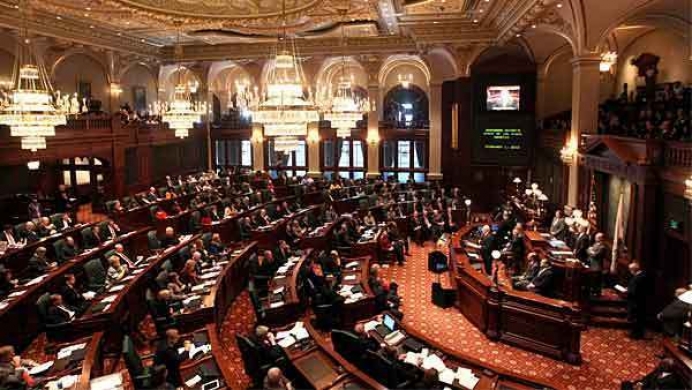 Illinois Bill to Crack Down on Conscience, Compel Referrals

Long considered a model for the protection of freedom of conscience for healthcare providers, an amendment to Illinois’’ Health Care Right of Conscience Act could create major problems for pregnancy help organizations.

The law’s proposed change, Amendment No. 3, introduces new regulations that would mandate healthcare providers to advise clients on the “benefits” of abortion, as well as make referrals for abortion services.

Having passed the scrutiny of the Illinois State Judiciary Committee, the changes could be read to a Democrat-controlled Senate body as early as Tuesday, April 21.

Americans United for Life (AUL) is leading the national opposition to the change, along with Alliance Defending Freedom (ADF). An Illinois-based coalition of pregnancy help organizations has created Illinoisrighttolife.org/protectmyconscience, an informational website on the bill.

“Amendment 3 undermines the freedom of conscience and invites intimidation and legal action against pro-life healthcare providers, and threatens the core mission of pregnancy resource centers that offer women alternatives to abortion,” AUL said in a statement Monday.“

While the language of the bill does specify in one place that conscience protections would be remain in place and a healthcare providers would not be compelled to make a referral to an abortion provider, the following language from the bill seems to create a contradiction in terms:

The underlying ambiguity on the definition of “referral”—a trend the bill shares with AB 775, a California bill currently under review with the Committee on the Judiciary—points to an emerging trend with anti-pregnancy center legislation across the nation.

“This legislation invites intimidation and legal action against pregnancy centers and all pro-life healthcare providers,” AUL said in an April 20 email to its supporters. “SB 1564 erodes conscience protections for healthcare providers—including the right not to counsel or refer for conscience-violating services, such as abortion—a right which has been protected by Illinois law for nearly 20 years.”

Having passed the Illinois Senate Judiciary Committee, the bill also cleared a major hurdle late last week, when Roman Catholic hospitals statewide—who treat 1 in 4 patients in Illinois—agreed to drop their opposition to the bill.