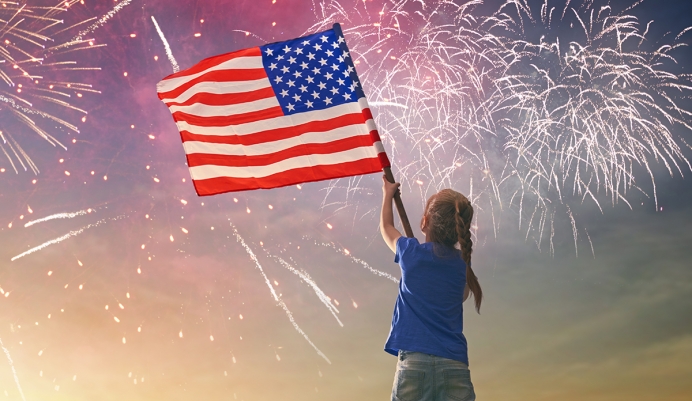 On July 3, 1776, John Adams penned a letter to his wife Abigail, sharing his dream of how future Americans might celebrate their country’s independence.

He wrote, “It (July 4) ought to be commemorated, as the Day of Deliverance by solemn Acts of Devotion to God Almighty. It ought to be solemnized with Pomp and Parade, with Shews (shows), Games, Guns, Bells, Bonfires and Illuminations from One End of the Continent to the other from this Time forward forevermore.”

At the time Adams wrote this, he had no idea if his vision would come to fruition. He didn’t know if he would lose his life during the war he knew was coming, whether the loose confederation of states would prevail, or whether the fledgling country—even if they achieved victory—would last.

Still, Adams had a vision for what Independence Day could be. I’ve always had a heart for visionaries and when we look back 243 years, we see Adams—for the most part—was a prophet. Sure, this country’s citizens could do much better on the “solemn acts of devotion to God Almighty,” but at least we’ve got the parades, games, and illuminations figured out (except for the Hot Dog Eating Championship—which is a bit much).

Looking at today’s social landscape, especially regarding the life issue, those of us in the life-affirming community need to keep Adams in mind. With nothing but a hope and a dream, Adams wrote his wife a letter that—at the time—some might have called “silly.”

Who talks of great celebrations when in a matter of months, the Declaration’s signers might face hanging? Who thinks of commemorations and games when there’s not enough money to raise an army? Who envisions parades when citizens are fleeing their homes in the path of the British army?

Today we live in a country where—for 46 years—the highest court in the land sanctions taking the lives of its own people. We live in a country where twenty presidential candidates race to the coffers of the largest abortion provider in the world, asking for money while declaring their fealty to abortion for all nine months (and beyond) for any reason.

We live in a country—supposedly founded upon the principles of life, liberty and the pursuit of happiness—where those who believe in the sanctity of life are called bigoted, hateful, uncaring, unloving and even unchristian.

This is today’s reality.

Tweet This: ”We have a shared vision. We can’t see it yet—but like Adams, we still believe.” @KirkWalden

Still, we have a shared vision. We can’t see it yet—but like Adams, we still believe.

We believe that one day, in this country every human life, regardless of location, circumstance or condition, will be valued with sacred honor. That one day, every mom and dad will be supported through a pregnancy and beyond. That one day, we will celebrate every child’s journey to birth, every child’s first breath, first step, first birthday and every other “first” we can imagine.

And we believe that one day, even those who today only see a new life as an inconvenience will join us in these celebrations.

But before we dismiss our vision entirely, let’s go back 243 years and talk to John Adams about his vision for a new country which would somehow fight its way through incredible odds to become the nation where we live today.

I’m not sure exactly what Adams would say to us, but he might remind us that vision launches wheels turning toward seemingly impossible destinations. And, he might smile and ask, “Did you see my letter to Abigail? How did that turn out?”