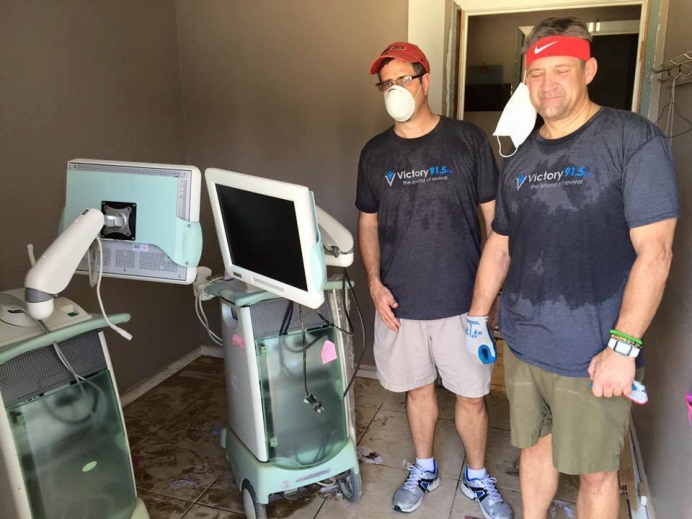 Categorized as the worst natural disaster to hit the U.S. since Hurricane Sandy in 2012, flood waters in mid-August have caused what’s estimated to be a minimum of $8.7 billion of damage, plus 13 lives, in southern Louisiana.

With 134,000 households having registered for aid through FEMA according to a recent CNN report, the areas in and around Baton Rouge were the epicenter of the storm, which dropped 31 inches of rain in just 15 hours in one part of Livingston Parish alone.

Located in Livingston Parish, Caring to Love Ministries and its flagship pregnancy help center, Care Pregnancy Clinic, was one of several homes and businesses within the area that did not carry flood insurance due to its relatively low risk of flooding.

When the building—and all three ultrasound units inside—was completely destroyed, running a bill well north of $400,000, Caring to Love Ministries CEO, Dorothy Wallis, sent out a plea for help to her co-laborers in the pro-life pregnancy help community.

A month later, her friends—most of whom she had never met—have responded in a major way, with one Minneapolis pregnancy center donating its gently used mobile ultrasound unit to Care Pregnancy Clinic.

The unit arrived just before the weekend Sept. 15, and hits the road officially this week.

The ultrasound unit was purchased in 2012 for just under $100,000 by Robbinsdale Women’s Center, which serves women directly across the street from Minnesota’s busiest abortion provider.

Because of the harsh Minnesota winters, plus the ensuing roadwork each spring following the thaw, however, Robbinsdale’s executive director, Peg Benicke, and her leadership team had decided to sell the unit and go a different direction.

Though she had buyers for the unit at half the original cost, Benicke was committed to making sure it was used for the same life-saving purpose for which it was intended.

Then, she received a call from Michele Chadwick, director of operations for ICU Mobile. Chadwick, who had originally heard of the need in Baton Rouge through a friend at Focus on the Family, had a question for Benicke: Would they consider loaning or renting the unit to Caring to Love for the winter?

“Every day, the Holy Spirit kept tapping me on the shoulders, ‘What are you thinking? Just bless them,’” Benicke, who has been with Robbinsdale since 1995, said. “It was like He was saying, ‘You think I’m not going to take care of you?’ Then, of course, a light bulb went off, and it was so apparent.”

When she approached her board about the offer—which was going to cost the center at least $48,000—Benicke said they were in total agreement.

With the board’s blessing, Benicke reached out to Wallis with an offer she couldn’t refuse.

“When she said that she felt the Lord was going to gift this to us, I couldn’t believe my ears,” Wallis said. “I just kept thinking, ‘Did I just hear what she really said?’ I let her talk and continue her encouraging words, and then I asked, ‘Did you say give?’”

Of course, Benicke had said just that, and within a week of their conversation, a driver from Baton Rouge was boarding a plane with a one-way ticket for Minneapolis, ready to deliver the vehicle that Wallis says will serve five or six clients per day.

Reaching Clients in the Throes of Crisis

When the flooding first began to subside in mid-to-late August, Wallis’s center was seeing up to 20 clients per day from a makeshift office in a small home. The landline phone lines are still out, and Internet access is still making an incremental comeback.

Wallis, who spent time in New Orleans with Caring to Love and their since-decommissioned ultrasound unit in the wake of Hurricane Katrina in 2005, felt the immediate urgency of reaching clients after having seen first-hand the opportunistic reaction of the abortion industry in similar crises.

In the wake of Hurricane Katrina, for example, Planned Parenthood arrived not with needed material aid, food and shelter, but with abortifacients, including the morning-after pill. Similarly, Planned Parenthood clinics responded to the terrorist attacks on the World Trade Center on Sept. 11, 2001, by offering free abortions to grieving New Yorkers.

With that in mind, Chadwick and ICU Mobile responded immediately—before getting into contact with Benicke—and sent down a mobile ultrasound unit that was between assignments from ICU Mobile’s offices in Toledo, Ohio.

That met the short-term need for Wallis and Caring to Love prior to the long-term solution, which Chadwick played a key role in coordinating.

“God calls us into community,” Chadwick said. “I just see it as God drawing a community of people together to continue to do the work He’s called us to do. Nothing stops Him. It’s just been a real blessing to be part of this and help where we can.”

“That’s kind of what mobile is, right? It’s fun that we could pick up our clinic and roll it down. It’s not quite what we were expecting, but when you get asked to do it, it’s a blessing to be able to serve.”

‘I’ve lost everything’ is basically all I hear

Though the ultrasound unit is a major step forward for Wallis and her center, they aren’t out of the woods quite yet. A ministry that, just prior to the flood, featured three ultrasound rooms and three client rooms and has served women since 1980, has more than just the physical tools to serve clients.

In the midst of the turmoil, Caring to Love has seen multiple staff members either dramatically reduce hours or leave altogether, either to tend to the loss in their personal lives, or to back away from an outreach that has shifted into triage mode this side of the deluge.

Tweet This: "'I've lost everything' is basically all I hear." #prolife #Louisiana #flood #LouisianaFlood

As she scrambles to try and fill the gaps at her center, Wallis is getting help from national groups such as Heartbeat International, which is supplying its L.O.V.E. Approach volunteer training free of charge through its disaster relief fund.

“‘I’ve lost everything’ is basically all I hear,” Wallis said. “It’s not just our clients. I’m looking at the pictures, because they took pictures on their phones and they’re showing me that they lost everything. Yeah, I can relate to that. I know what it’s like to see my whole clinic all in mush, in pieces. It’s heartbreaking.”