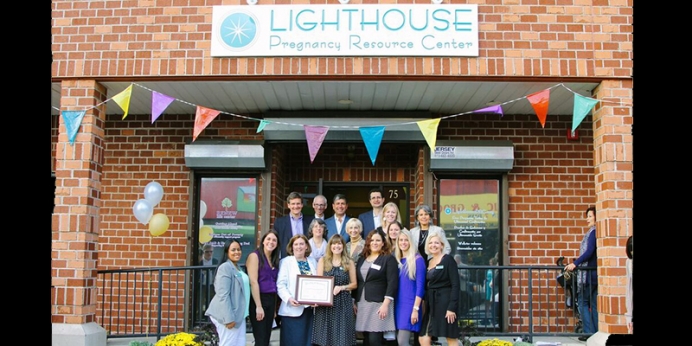 Paterson has a rich history as the nation’s first planned industrial city, but today struggles with the challenges of high unemployment, drug use, and a child poverty rate of 41 percent—three times higher than the state average.

Twelve percent of pregnancies in Paterson are to teenage mothers.

In the midst of a city where being caught on the wrong street could be dangerous, the aptly named “Lighthouse Pregnancy Resource Center” is a light breaking through the darkness.

Founded in 1984 by a grandfather whose heart was moved as he came across ads for abortion clinics, Lighthouse was first established in the nearby borough of Allendale until moving to Hawthorne in 2005. An interim director was managing the center that year, when the board of directors approached Debbie Provencher, a local pastor’s wife with a background in communications and public relations, with the prospect of becoming the new director.

“I prayed for about five months and was going to say no,” Provencher said. “Then the interim director had to move, which put them in the position of possibly closing their doors.”

Feeling the call of God, she stepped up to the plate and took the role as Lighthouse’s director. Just three miles down the road from Hawthorne, Paterson was already on Provencher’s heart because of mission work she’d done there as a college student.

“That winter, I was driving to a training on a highway that crosses over Paterson. I remember distinctly raising my hand toward the city and praying,” Provencher said. “I asked the Lord to grow the ministry so we could impact this city of great need right next to us. When I returned to my office, I opened an email from someone I didn’t know pledging $52,000. Our income the previous year had been $42,000! I knew then that God was up to something.”

Over the next few years, the Hawthorne Center continued to grow, adding medical services in 2009. By 2010, the staff at Lighthouse began to look beyond the borders of Hawthorne.

“The next county over from us has two busy abortion clinics,” Provencher said. “One does early abortions and one does later-term procedures. We weren’t near either. There were women involved in 40 Days for Life who were realizing if they talked to women outside the abortion clinic, they had nowhere to bring them.”

This led to the opening of a Lighthouse location in the city of Hackensack, where the hours at the center correspond to those of the abortion clinic.

“Right after we opened that center, in 2012, a woman who worked in Paterson called me, and begged us to open a pregnancy center there,” Provencher said.

“I said to her, ‘Please wait. Let us balance our budget for one more year.’ We knew that was the next thing to do. Soon after that, the Knights of Columbus called and said they wanted to donate an ultrasound to our future center in Paterson.”

As God continued to open doors for Lighthouse’s ministry to spread, He also began to work on the hearts of four women involved in another pregnancy center in New Jersey.

Spending time together at Willow Creek Association’s Global Leadership Summit, the quartet of women felt the call together to start an outreach that would not only provide support for women to choose life, but also ongoing support for families in poverty.

Together, they traveled across New Jersey, praying for direction about which city God had in mind for the future center. When they came to Paterson, they realized in unison this was it.

After finding out that Lighthouse was operating nearby and serving Paterson from its Hawthorne location, the group established Renew Life Center and formed a partnership with Lighthouse in 2014 in preparation for October's launch.

“Essentially, we decided to partner as related but separate organizations,” Provencher said. “We decided to share space and staff. Lighthouse would focus on what we do best, pregnancy confirmation through the first year of parenting. They do transformational education; helping families thrive, not just survive, after choosing life.”

Since opening its doors, Renew Life Center has launched programs to help families escape the cycle of poverty. Using curriculum like “Getting Ahead in a Just Gettin’ by World,” and “24/7 Dads,” the staff facilitates discussions about road blocks that prevent families from moving forward.

After participants identify their own obstacles, Renew Life Center commits to helping the parent remove at least one barrier to a better life.

“Women are saying, ‘This is even better than what I thought it would be!’” Provencher said. “Some of these parents from poverty backgrounds are saying that no one has ever asked for their input about anything.”

Besides these new programs, Lighthouse is running a class for teen moms called “Steps 4 Life,” that teaches both Zumba and building healthy relationships.

While being the director of a suddenly multi-faceted organization is definitely hard work, Provencher says she credits Lighthouse’s success to God and faithful donors and volunteers who have given and helped every step of the way.

“All the major things that have happened in this ministry have always been God putting it in people’s hearts,” Provencher said. “It’s about God’s heart for life. If we’re doing His work, He’s a step ahead of us. We are doing something that is totally dependent on God for provision. More ministry means more resources are needed. It’s good to be reminded that it’s His ministry. People’s lives matter even more to Him than they do to us.”

Alongside other established ministries, Lighthouse Pregnancy Resource Center and Renew Life Center are bringing life to the families of Paterson.

The Rev. Michael McDuffie of Mighty Sons of God Fellowship, for example, has been a strong supporter of the ministry and has brought young women to Lighthouse for help during their pregnancies.

“Having a ministry like Lighthouse Pregnancy Resource Center in Paterson will bring the hope of Christ and the promise of life to families,” McDuffie said. “Thriving families equal thriving communities, and that’s what Lighthouse represents to this city.”