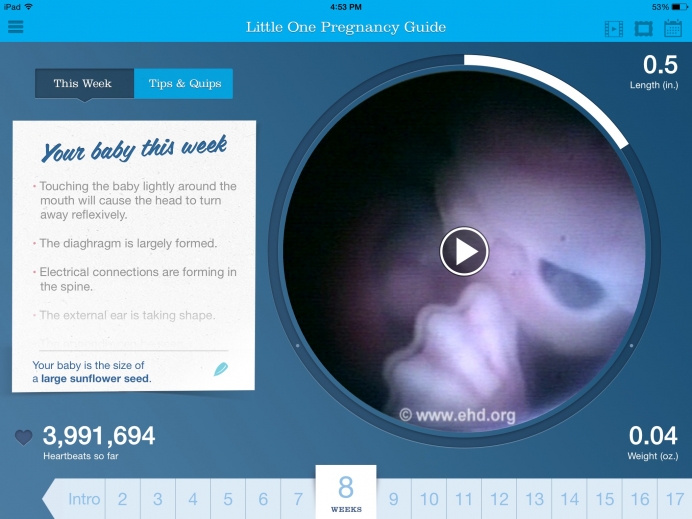 Little One App a "Game-Changer" for Florida Pregnancy Centers

“It’s not like it has arms or legs,” she said. The woman who walked into Pregnancy Center of Pinellas County on Florida’s Gulf Coast had already made up her mind.

“This girl was abortion-minded,” Nancy Lathrop, director of client services for the 30-year-old center, said.  “She had made the decision that was what she was going to do.”

Equipped with an iPad and the Little One Pregnancy Guide mobile application, the nurse on duty that day was able to respectfully challenge and put to rest the client’s misconceptions about the life that was growing inside of her.

Through the Little One app, the client was shown authentic and intricate footage of prenatal development at the same growth stage of her unborn baby. The personhood of the child was clear and undeniable.

As a result, the client chose life for her baby and decided to parent.

Released in 2013, the Little One Pregnancy Guide App for iPad was developed by the Endowment for Human Development, a nonprofit organization founded nearly 15 years ago by former emergency medicine practitioner Dr. Brian Stillwell, who established the organization to “improve health science education and public health through prenatal education.”

Through extensive educational resources and multimedia products found on the organization’s website, the Endowment for Human Development strives to increase public awareness of the early stages of human development by equipping healthcare professionals, educators, governments and families with knowledge that may in turn help enhance a child’s development and decrease the risk of birth defects and chronic illnesses.

Creative and innovative mobile applications such as the Little One app are an important part of the Endowment for Human Development’s vast outreach and mission to improve public health.

“Beyond the rare imagery, the Little One app offers detailed development milestones for each week of pregnancy derived from prenatal development research published over the last 100 years,” Dr. Stillwell said. “The app also provides audible prenatal heart sounds as well as a heartbeat counter, which continuously estimates the number of times the baby’s heart beats throughout pregnancy.”

“The user interface allows quick estimation of the due date followed by immediate access to the current week of pregnancy with development highlights and video. Pregnancy caregivers really can show each pregnant woman what is going on with her baby in seconds, and do so with a high degree of scientific accuracy.”

Prenatal education is paramount at each of the centers, and the Little One app is proving to be a godsend to enhance the client experience. Each of the five centers are equipped with three iPads—two for client usage and one for the nursing staff—all 15 of which are equipped with the Little One app’s powerful imagery and detailed prenatal development narratives across the pregnancy help network.

While informative and visually appealing brochures, along with other print materials remain in use at every location, Lathrop, who has been serving in her role for the past 10 years, has noticed a shift to digital in how clients prefer to communicate and receive information, which has led her organization to explore new venues of connecting to a digital age.

“Technology is the language our clients speak, working with the millennial generation,” she said. “We felt using the iPad helped them interact. It was like literally turning on a light switch.”

Lathrop believes the incorporation of the Little One app has made a tremendous impact on their clients, solidifying the app as a vital supplement to the highly effective ultrasound portion of a client’s pregnancy help center experience.

The Little One app’s rare and stunning prenatal development footage of every growth stage of an unborn child’s life has encouraged many life-affirming decisions at the centers.

“The decisions for life have been easier to persuade along that line because [the app] shows it’s not a clump of cells,” Lathrop said. “There’s something about intrauterine footage. It shows it’s a baby. It has a heartbeat and a brain.”

Dr. Stillwell anticipates additional advancements for the Little One app, including the creation of a similar app for smartphones and a Spanish version, with more languages to follow. The app for Android tablets was released this past April.

Tweet This: "There's something about intrauterine footage. It shows it's a baby." @FollowNewLife

In the midst of changing laws and ongoing debate regarding the sanctity of life, the Little One app can give clients the concrete, science-based answers they are looking for, versus weighing various opinions or personal views. For Lathrop, she and her pregnancy center team have found a powerful ally in the technology of the Little One app.

“It doesn’t overwhelm the client, it’s easy to navigate and we can help her,” Lathrop said. “It’s been a game-changer for us.”