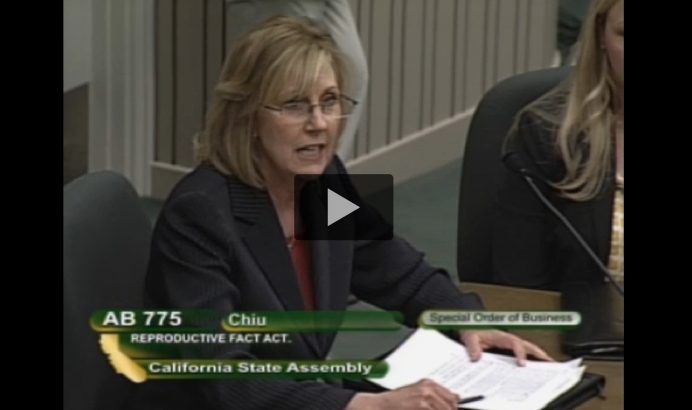 Mary Sterner Sosa, M.D., the only OB/GYN who spoke at the hearing, testified against the bill.

Overriding objections by expert witnesses from legal and medical fields, along with 82 additional witnesses in opposition to California State Assembly Bill 775, the Assembly Health Committee voted 11-5 to pass the legislation Tuesday afternoon.

The bill, named the “Reproductive FACT Act,” is now headed to the Judiciary Committee, which is chaired by Assemblymen Mark Stone (D) and vice-chaired by Donald P. Wagner (R).

“Regardless of the decision to pass the bill at this committee level, we made an unmistakable statement that the opposition to the bill has the support of hundreds of thousands of Californians,” Carol Dodds, Executive Director of A Woman’s Friend Pregnancy Resource Clinic in Marysville, said. “While the citizens who lined up in support of the bill numbered 24, over 80 people spoke in opposition, several stating the number of thousands of people on whose behalf they spoke as organizational representatives.”

Tweet This: @alliancedefends and California Coalition of Pregnancy Clinics and Centers testified against AB 775.

Expert witnesses from Alliance Defending Freedom (ADF) and California Coalition of Pregnancy Clinics and Centers, along with Valerie Hill, CEO for Real Options Pregnancy Medical Clinics—licensed by the California Department of Public Health—opposed the bill.

Eighty-two additional witnesses, gathered by the grassroots efforts of the California Coalition of Pregnancy Clinics and Centers, voiced their opposition to the bill, including 13 nurses and four individuals who identified themselves as post-abortive.

In her testimony, ADF’s Heather Gebelin Hacker underscored the hundreds of thousands of dollars paid out in recent years by municipalities in Maryland, Texas, and New York because similar legislation—also pushed by NARAL—has failed to pass constitutional muster, particularly on the First Amendment.

“If a center speaks truthfully, it can choose what it says without any disclaimer,” Gebelin Hacker said. “[AB 775, instead] does exactly what the First Amendment prohibits.”

Also testifying against the proposed legislation, Mary Sterner Sosa, M.D.—the only OB/GYN who spoke at the hearing—said the bill’s passage would introduce major threats, both to informed consent and the issue of patient abandonment.

While Gebelin Hacker pointed to the bill’s unconstitutional nature as government-compelled speech, Sterner Sosa said the bill could potentially create a patient-abandonment scenario. In response, a co-sponsor of the bill, Assemblyman Jim Wood (D) pointed to his background as a dentist to downplay the role of disclaimers in medical establishments.

Based on several unsubstantiated allegations made in NARAL Pro-Choice California’s recent “investigative report,” Assemblyman Chiu denied that the wording prescribed by the bill—which includes a phone number to county services to connect women to abortion providers—refers for or prefers abortion providers.

As it is currently written, the bill would require a pregnancy help organization offering medical services, such as ultrasonography and STD/STI testing, to post and/or disseminate the following information:

“Since this bill has been mischaracterized by some, let me make clear what AB 775 does not do,” Chiu said in the hearing. “This bill does not require referrals to abortion clinics, does not provide preference for one clinic over another. It does not prevent a center from providing ongoing services, and it doesn’t discriminate based on religion.”

Speaking against the bill was Assemblyman Jim Patterson (R), an adoptive father of three who has served as a founding board member of a pregnancy help organization.

Patterson pointed to the danger of what he called the bill’s inherent representation and proposed enforcement of “government-approved speech,” as well as its “infringement upon the free exercise of religion.”

Tweet This: "If we're going to err, let's err on the side of the Constitution." @JimPatterson559

“With all due respect, I take huge umbrage to the huge reach and exaggeration, and, I think, downright misrepresentation of the organizations [to which] I have given time,” Patterson said. “The reality of this matter, being the political and complex issue that it is, it does seem to me that, if we’re going to err, let’s err on the side of the Constitution.”

If passed through the Judiciary Committee, the bill will then move to the Appropriations Committee before being sent to the Assembly floor. No timeline has been announced for the follow-up hearing.

To view the hearing in its entirety, click here.