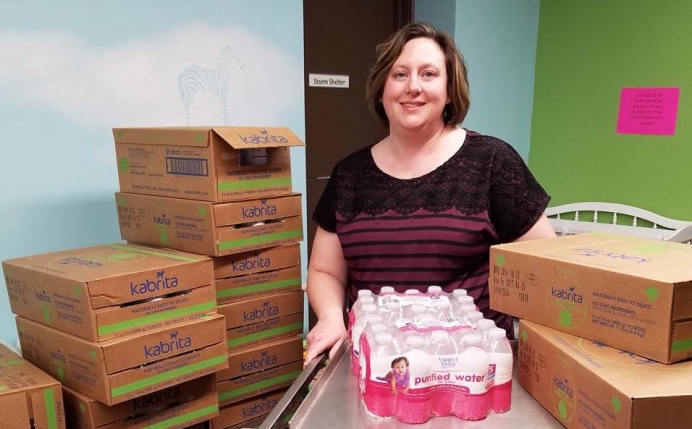 In less than a dozen years, an effort to supply the material needs of pregnant teens in Park Hills, Mo., blossomed into Parkland Pregnancy Resource Center, whose recognized value to the community recently earned them a $17,000 grant for a complete lighting upgrade from the Jefferson Memorial Community Foundation.

The foundation looked “to give grants to nonprofit organizations around the area that served clients from Jefferson County,” the pregnancy center’s executive director, Becky Laubinger, said. “They're very generous and want to help with some of those needs that, for other grants, wouldn't qualify.”

Describing the need for updating lighting, executive assistant Linda May said, “We had the old fluorescent lighting throughout the whole building. We spent a lot of time and energy just replacing bulbs and ballasts.

“We had some lights that would surge on, and in one room the light hummed so loudly you couldn't use the room for consultation. It was a need we had, and it wasn't in our budget at all.”

Thanks to the grant, lighting has been upgraded throughout both the center and the clinic. Updated emergency exit lights were also installed, and outdoor lighting for the parking lot has improved clients’ safety when parenting classes dismiss after dark.

“This community is among the poorer in Missouri,” Laubinger said. “It also ranks high for drug-use. I would not say the majority of our patients are using drugs, but the majority are at or below the poverty level.”

Better lighting has helped these clients in very practical ways.

“We try to network with agencies in our community and tell clients what else is available. We have this board with all these notices pinned up on it. Now clients can actually read them!”

But networking with other agencies is only one benefit to their community which the grant recognized. This pregnancy resource center has contributed much more.

More Than a Well-Lit Space

“We view our work as having three prongs,” Laubinger said. “There’s prevention (sexual risk avoidance classes in the schools), and intervention (clients are involved in a crisis pregnancy and we're able to meet them in that need), and education (for parents, to support them through that).

“Our mindset is to support them through this whole process, not just one moment; to walk alongside men and women, building relationships and making them strong.”

This mindset developed rapidly over the center’s short history. At first, founding director Kim Nash, a former teacher, wanted to establish a place to provide teen moms with much-needed resources.  Looking for direction, she and the steering committee connected with people in the pregnancy help movement.

They soon joined Heartbeat International and Alliance for Life Missouri, which provided additional training. By the time the original center opened on Halloween of 2005, the PRC was offering Earn While You Learn parenting classes and free pregnancy tests. They added free first-trimester ultrasounds within a few months.

The center quickly outgrew its original location and purchased a former medical facility in 2009. When Laubinger took over as executive director in 2014, the board had already recognized a potential problem with the center’s two divergent clienteles having to use one facility.

“We had parenting classes and an Earn While You Learn program going,” Laubinger said. “We also had the pregnancy tests and ultrasounds going. Everyone was going in and out the same doors. So our board, in a desire to truly reach more abortion-minded clients, decided to split the center.”

As of January 2015, “We have the Parkland PRC and we have a clinic as separate facilities, and we added STD testing to the clinic's services,” Laubinger said. “We provide testing for chlamydia and gonorrhea for anyone who wants it—men and women—whether or not they're pregnant.”

The clinic supplies patients who test positive for STDs with a prescription for treatment. As required by law, the clinic staff also contacts the health department so they can follow up with potentially affected community members. “We make sure we're staying in communication, as it's for the best health of the community,” Laubinger said.

Clinic patients with positive pregnancy tests receive referrals to Parkland Pregnancy Resource Center for prenatal and parenting education and support. Together, the two offices see about 130 visitors a month.

Six staff and a crew of 40 volunteers run the two offices, including volunteer nurses and patient advocates at the clinic. In addition to offering the Earn While You Learn program, they take a sexual risk avoidance curriculum into schools and offer classes for dads upon request.

When local courts mandate parenting training, clients’ social workers can refer them to the center’s four-week-long Parent Support Classes. “We know it's only four weeks, so it's not going to make a huge difference in the big picture of the many things they're going through,” Laubinger said. “But we also are able to provide Bible studies in the classes… That's where we see the most impact from those classes.”

Shedding Light Beyond Their Walls

The impact of Parkland Pregnancy Resource Center is rippling outward through the communities they serve. Lives are changing, like that of the teen mom whose own mother was pushing her to get an abortion to avoid the difficulties she had known as a teen mom herself.

Instead, “the daughter was adamant against abortion,” Laubinger said. “She wanted to come to classes and learn to be a good mom. She went through our program, and always had great things to say about the things she had learned, and how her mom was not always supportive of her growing up, but she was making that effort to become a loving, supportive mom for her child.”

Reaching even farther, the center’s post-abortive program, led by volunteer Amber McCutcheon, will soon be available to additional centers, churches and others who want to provide the resource in their own communities. Tentatively named “HOPE”—Healing Our Past Experiences—the program benefits women who have been through sexual abuse, trauma, or, as McCutcheon calls it, "misuse."

“The program aims to deal with those past patterns or abuses, and recover from that, so women can have a healthy view of themselves and a healthy attitude toward relationships,” Laubinger said.

After seeing the way HOPE “exploded” among local clients, she encouraged McCutcheon to fully develop her own program. McCutcheon is working on a curriculum and DVD series to equip others to offer this healing ministry.

By turning up the lights at Parkland Pregnancy Resource Center, it appears that the Jefferson Memorial Community Foundation successfully bolstered the efforts of an organization already skilled in ministering to its community—and beyond.