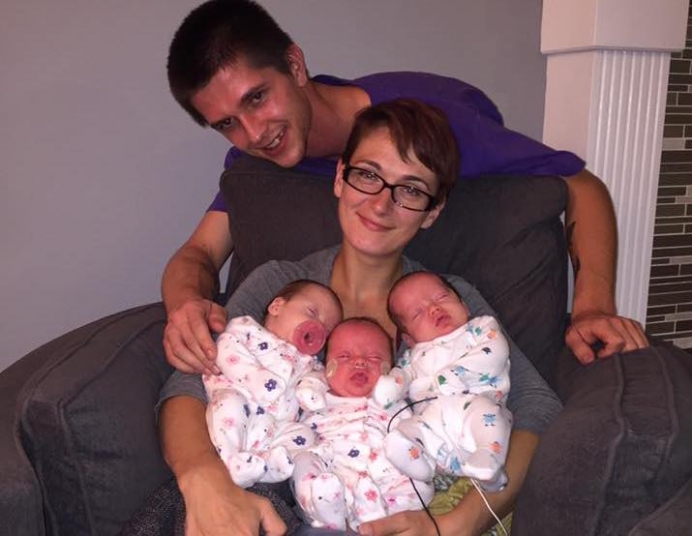 These Gorgeous Triplets Could Have Been Lost to Abortion, But Their Mom Chose Life

When she first learned she was pregnant, Janey was at a loss for what to do. Homeless and sleeping on someone else’s couch with her 4-year-old daughter, having another child seemed to be not only an inconvenience, but a near impossibility.

Little did she know things were about to get even more complicated—and far more beautiful.

After a quick internet search, Janey found Pregnancy Resource Center of Rolla, Mo. During her first appointment, she confirmed her pregnancy and had a long coaching session, discussing in detail the three options before her. She agreed to come back for another session and set an appointment for an ultrasound.

“The most empowering thing that we can do for women in this situation is our options coaching because coaching is really different from counseling,” explained Jane Dalton, the center’s client services director and program director for St. Raymond’s Society, a transitional home for women facing unexpected pregnancies.

“With options coaching, you’re talking to her about her options. It’s all about her and it’s all focused on her because, let’s face it, she’s the one who is in the situation. I’ve never coached someone who truly wanted to abort her baby. They just want out of the situation they are in. They don’t know how to get out of it except for abortion and it seems like it’s going to be quick and easy for them.”

Janey wanted to choose life for her baby, but before she could return to the center for her ultrasound appointment, she ended up in the emergency room with what appeared to be a dangerous complication to her pregnancy.

That’s where Janey learned via ultrasound she was pregnant with not one, but three babies.

“The ultrasound technician and nurse confirmed that there were three babies and they were extremely excited to see triplets, but I couldn't stop crying at all,” Janey said. “The doctors tried to talk to me about it, but all I could think about was how my life was going downhill quickly.”

Tweet This: On the edge of #abortion, she found out she was carrying triplets. Here's what she did next. #prolife

Dalton immediately offered Janey housing through St. Raymond’s Society, where she could also focus on planning for her and her children’s future.

“This is one of those really, really critical cases,” Dalton said. “It’s difficult for any woman at all to talk about having triplets. You kind of gasp. So that was definitely the situation with her. And it was the situation here at the center when she came in and we found out that it was not just a single baby but it was going to be triplets, and she was homeless and she was afraid. She just felt like she was against the wall.”

On Sept. 15, after over two months in the neonatal intensive care unit, Xander was able to head home to St. Raymond’s. Five days later, on September 20, Arabella was released from the NICU. Taytum was then reunited with her siblings and mother Sept. 27.

The transitional home was ready with three cribs for the new family members, a toddler bed for big sister, and a bed for Mom.

“We have volunteers lined up to come in and help Janey through this difficult time,” Joe Dalton, the center’s executive director, said. “Her daughter is now 5 and has started kindergarten. We have volunteers that come in to help hold babies, rock babies, change diapers—whatever help is needed.”

While Janey transitions into life as a mother of four, the triplets’ father, Dustin, has also stepped up to play a key role in his family’s life. He was present at the babies’ birth and is looking to the Daltons and others for help with parenting skills as he embraces fatherhood.

“The hidden story in all of this is Dustin,” Dalton said. “An event that would have sent most young men his age screaming into the night only drew him closer. Time came for the delivery and Dustin was there. This young man stood tall and committed to be there for his babies and Janey. He’s a strong young man.”

Girls and women who come through St. Raymond’s get their GEDs, go to college, earn professional certificates for medical careers, and graduate ready to work. All the while, they are learning to parent their children—something many residents worried would never be possible.

Janey is beginning online classes and participating in a program the Daltons created—appropriately titled “My Ridiculously Amazing Life”—while meeting regularly with a success coach whose focus is on helping Janey develop self-sufficiency in healthy relationships, education, housing, transportation, budget and finance, household skills and parenting skills.

“The triplets, my oldest daughter, and myself would be lost if it weren't for the PRC, and the wonderful other groups that work alongside them to help those in a situation like mine,” said Janey. “Jane herself went straight to the board members of Saint Raymond's just to talk to them about our delicate situation so that we may be able to take this tragedy and turn it into a HUGE opportunity for me and my family.”

By the time the triplets are school age, the goal is for Janey to have graduated and enter the work force.

With all three babies home at St. Raymond’s, her now 5-year-old in kindergarten, and beginning her own college education, Janey has a plenty on her plate. She also has plenty of support from Dustin, the Daltons, and a team of volunteers who have come alongside her in the past year.

“This is a community,” Dalton said. “This really is all about community. When you have a community that comes together and organizations that work so closely together, moms and babies benefit.”

To learn more about St. Raymond’s Society of Rolla and to get regular updates on the triplets follow them on Facebook here.

Nancy is a work at home mom who writes about parenting, special needs children, and the right to life. She is the lucky mother of three spirited little girls, one who has cystic fibrosis, and she spends any free moment she can find fundraising for a cure for CF. A writer at LiveActionNews, you can read Nancy's personal blog at www.ChronicAdmissions.com.