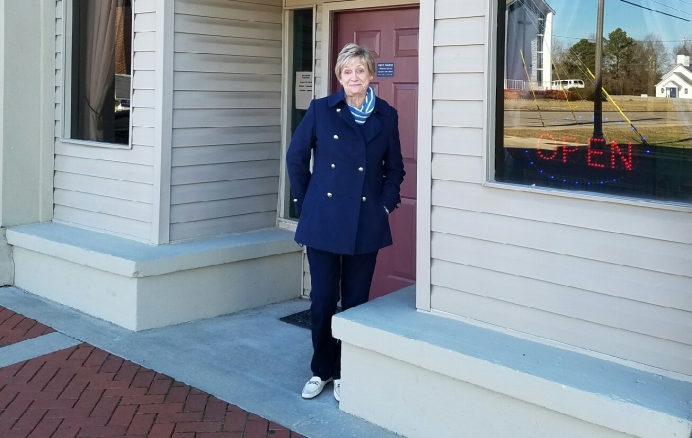 Situated between the large cities of Birmingham and Huntsville, Alabama, First Source for Women is the only pregnancy center in Cullman County. Open since 2007, many women still don’t know about the services of this life-affirming pregnancy center.

That’s about to change.

After nearly a year of contemplating how to reach more women experiencing unplanned pregnancies in the Hanceville area and beyond, First Source is set to go mobile with a Save the Storks medical unit.

Originally slated to retrofit a retired city ambulance, Bethell and the First Source board decided the unit was too small for their needs. They looked at additional options; a used RV, which would need retrofitting to equip it as a mobile medical unit, would be “too expensive.” A Save the Storks medical unit seemed out of their price range as well, Bethell said.

But, Bethell reached out and talked with Save the Storks just to be sure. As the conversation went on, she and the board decided to take the plunge and start raising funds for a Stork bus, signing a contract in December 2016.

Prior to the center’s October fundraising event, just a few donations for the mobile unit had come in, but, as Bethell says, that fundraiser marked a crucial turning point.

“The Holy Spirit really moved,” Bethell said. “God was truly there; He wanted us to have that mobile unit.”

After the banquet, Cullman mayor Woody Jacobs contacted Bethell and encouraged her to request $10,000 from the city. She did, and the council approved the request at its next meeting, the following Monday.

Other organizations and businesses also stepped forward, including the Lions Club and a local bank. By year-end, Bethell and her board were looking at $95,000 ear-marked for the mobile ultrasound unit—quite the accomplishment for an organization that has never raised over $30,000 for a past project.

For Bethell, her staff and supporters, the haul reminds them of the Apostle Peter’s miraculous catch of fish recorded in John 21.

“There’s a much bigger mission, it’s a huge outreach in Cullman County,” Bethell said. “We have the vision of Peter casting his net; we feel we’re really called to do this. God has been working on this through us, and we raised the money before the end of the year. That’s not us, that’s God.”

Tweet This: @SaveTheStork bus to hit the road as early as this spring in rural #Alabama #prolife

With 20 busses on the road and 20 more in the works, First Source’s mobile unit will be Save the Storks’ first in Alabama—a 26-foot Mercedes-Benz Sprinter with a professionally designed graphic-wrapped exterior, complimented by an interior that goes above and beyond to welcome women facing an unexpected pregnancy.

Bethell and her staff can park at public places like schools and shopping areas, bringing life-saving help to women all over the city and surrounding area.

While First Source is well on its way to its fundraising goal to get the mobile unit on the road—partly offset by a $30,000 grant from Save the Storks—Bethell and her team are looking to local churches for additional funds.

“We’re appealing to non-donors now because they don’t know we’re here,” Bethell said. “That’s part of the mobile, too, is gaining the exposure.”

Although First Source considers less than 15 percent of the women they currently serve as abortion-minded, many of their clients face financial, martial and relational struggles that can present real obstacles to carrying to term.

The state of Alabama reported more than 35,000 cases of domestic violence in 2013, the last year data was available; Cullman County is not immune to such incidents. Reaching these women and providing them not just medical services but resources, such as victim’s services and safe houses, is critical, she said.

The mobile unit is vital to expanding that outreach.

“You have to go that extra step,” Bethell said. “A lot of women don’t know we’re here. It’s a big county, so that’s part of what this push, to send them to the resources with our mobile.”

With hopes to receive the Stork bus by the end of April or first of May, followed by staff training, the immediate goal is to use the bus at least two days a week.

“We’re very excited,” Bethell said. “We can’t wait to get started. We want to do the job we need to do.”