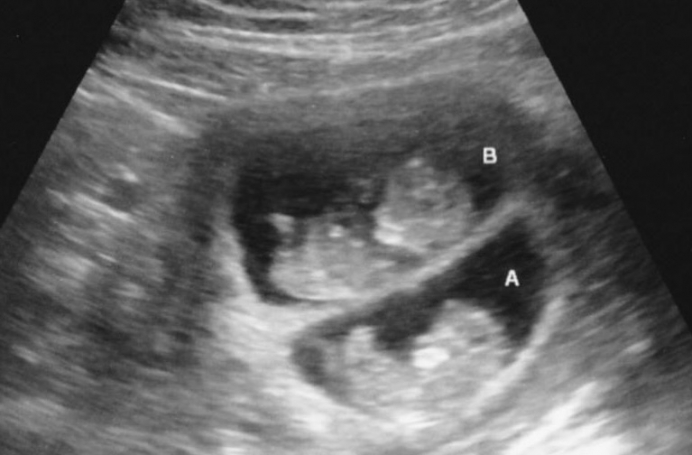 Twin babies in the womb captured via ultrasound

A nurse manager for a set of Florida pregnancy help clinics came to her role through the various twists and turns of life, and with the help of a special ultrasound training she’s been shown how pregnancy help ministry fosters God’s plan for life – often two-fold.

April Lueder is a nurse who became involved through her church in fundraisers and other activities to support local pregnancy resource centers. Her desire to become more involved in pro-life work grew.

Three years ago, April’s family moved to Florida, and she planned to get out of nursing.

Once while she participated in a ladies’ Bible study at her new church the Pregnancy Resource Center (PRC) distributed information on volunteering.

“I wanted to go in as a volunteer advocate,” stated Lueder.

However, they knew she was a nurse, so soon she became a part time nurse with PRC.

Then in 2020 Lueder became the nurse manager of the two PRC locations in the Naples and Fort Myers areas.

In May 2021, the PRC clinic received a visit from Heartbeat International President Jor-El Godsey and Heartbeat’s Director of Medical Impact Christa Brown.

“During that visit we learned that April was looking for ultrasound training,” said Brown. “We shared with her that we have training available—didactic online and the Love Approach scanning clinical.”

Heartbeat International has championed a new form of ultrasound training that connects the technical needs and the spiritual needs for those working in pregnancy help.

Next, students come on-site to complete an in-person scan lab experience which provides the environment needed to complete the required scans on women.

By combining the technical, the practical, and the spiritual elements into one pregnancy help medical training, nurses leave fully equipped, qualified, and ready to scan within their center.

So, in July, after having completed the didactic online training, Lueder and another nurse from PRC attended the second part of the training in Columbus, OH, as part of Heartbeat International’s Pregnancy Help Institute (PHI).

“She was a quick learner and has a tremendous heart for this ministry,” Brown noted regarding Lueder’s participation in the course.

Besides simply taking to the training quickly, something else began occurring. It seemed as if Lueder was a metaphorical “lightning rod” for discovering twins on ultrasound.

“We had a large number of models at PHI who were pregnant with twins,” Brown remarked of the training in Columbus. “This was by coincidence, but by the third day had become quite comical to find yet another set of twins on

When Lueder returned home, some of her first scans were also of twins.

“I know the Lord supplied her with all the training she needed to help these moms as they made challenging pregnancy decisions,” Brown said of the Lueder-twin phenomenon.

Lueder originally looked into ultrasound training because it was hard to staff sonographers. She believed Godsey and Brown’s visit was simply perfect timing.

“It was God’s timing giving me clarity that this (PHI training) was the proper program, and it was the right training to go with,” recalled Lueder. “Then we saw several sets of twins in the training of various gestations.”

“When we went home, we shadowed stenographers for a while for more practice, to gain further understanding of the equipment and doing correct measurements,” she continued. “I had one set of twins a few weeks ago of seven weeks gestation with a teenage mom.”

Unfortunately, this mom still chose to have an abortion. Lueder’s center continued to offer her support in follow up, giving her information about the Surrendering the Secret program for post-abortive women.

Women often do not seek out help for healing for their abortion until a few years later or a with subsequent pregnancy, but a seed of hope is planted when offering it immediately. 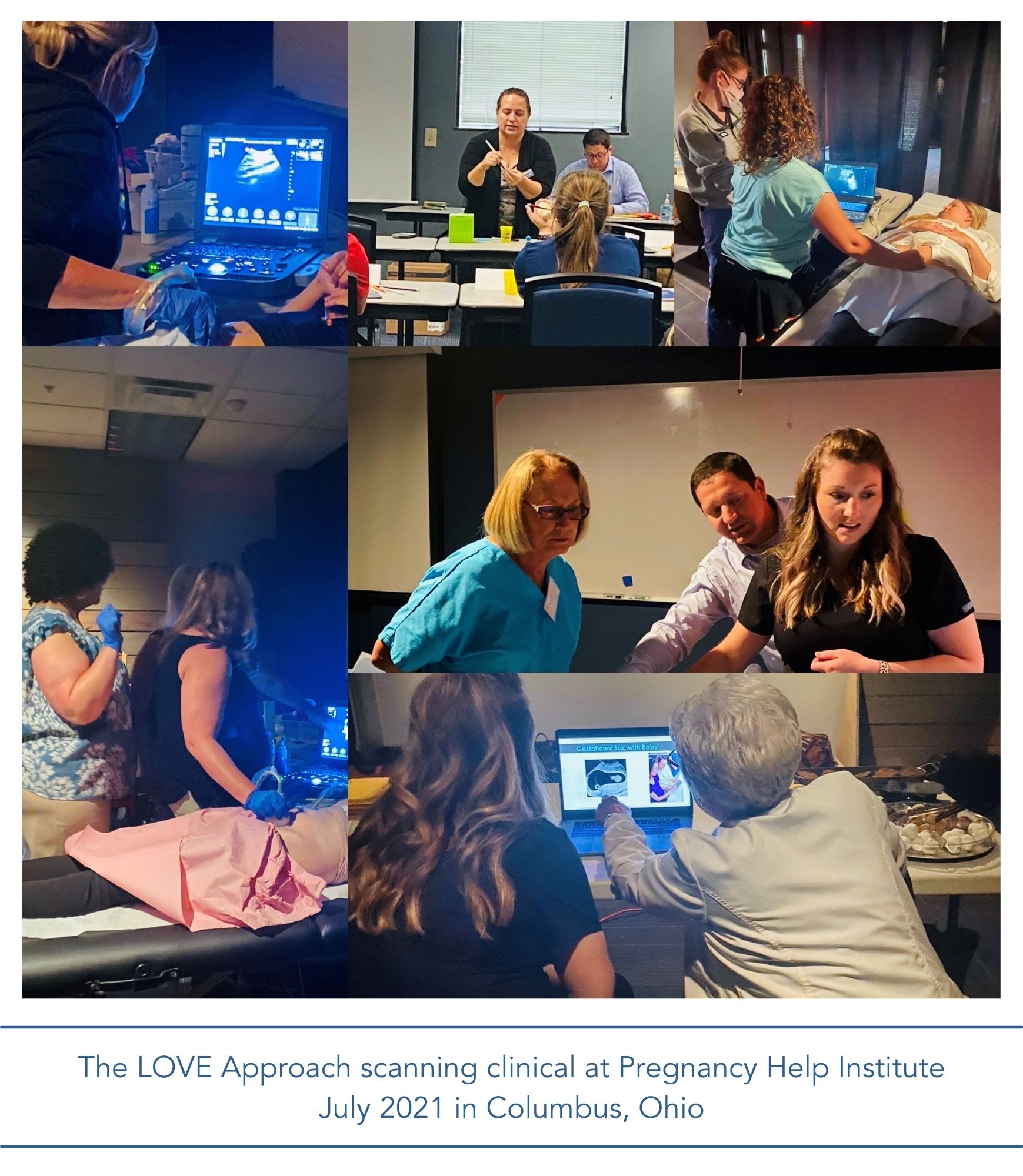 As Lueder continued shadowing other sonographers for several weeks, the twin discoveries continued.

In one day, they actually saw two clients who were pregnant with twins and were in the center at the same time.

The APR client, who had taken the first abortion pill and had changed her mind, was seeking to learn how she could save her baby, and she was amazed to discover she was carrying twins.

Lueder asked the client, “Did the abortion clinic tell you that you are having twins?”

“No,” the client replied.

Tweet This: Pregnancy help organizations speak the truth in love and offer help. The decision is on the client. We are not in control. God is.

While the APR protocol is successful in saving the unborn child as often as 68% of the time and has resulted in over 2,500 live births so far, it was unfortunately not successful in this case.

Lueder spoke about the client’s reaction.

“Losing the child (children in this case) is still as difficult as having had an abortion,” she said, “because in their mind they caused it. So, we talked about how there is forgiveness and healing, and you tried to right the wrong and God will honor that.”

Lueder offered the Surrendering the Secret program to this client as well.

The trend has not let up at PRC.

“We did have a set of twins a month ago (19 weeks gestation),” Lueder said, “the client was very determined to have an abortion but changed her mind after seeing the ultrasound.”

She reflected on the future for PRC and how having nurses equipped with ultrasound training will benefit the center and open the door for life-affirming choices.

“I love Heartbeat—I love their program and we are looking at sending another nurse through their program,” she said. “It was fun as a nurse to learn another skill. We (nurses) are limited in general in what we get to do, and ultrasound is not an easy skill, but it is fun.”

Lueder says she is, “Still learning and still practicing.”

“I love being in on ultrasounds to be able to talk to the client about her baby, and point out baby parts,” she said. “It is really rewarding to be able to be in there to do that… Also, a heartache as well when they decide to abort. That’s sad.”

“I learned as an advocate how to handle the heartache,” Lueder added. “At first I would beat myself up—girls would call me from the abortion clinic. It is devastating, but I’ve learned to realize I’ve done what I can do. I’ve done what God asked me to do.”

Lueder admitted she has had to reacquaint herself with this truth now that she is participating in sonography, saying, “I’ve had to relearn that with doing ultrasound.”

She has the hope for God to bring more blessings of life to and through PRC.

“We speak the truth in love and offer help,” Lueder concluded. “The decision is on the client. That is freeing because I’m acknowledging that I am not in control. God is.”