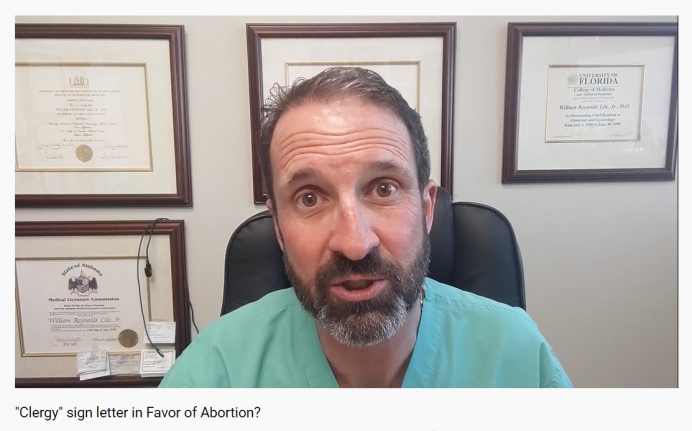 A pro-life OB-GYN chided a group of Vermont clergy that expressed support for abortion as the state’s legislature considered amending the Vermont constitution to establish a “right” to the procedure.

The clergy had written a letter published in several Vermont news outlets “in support of women’s reproductive liberty and a woman’s right to choose.”

Dr. William Lyle roundly condemned the public support for abortion, saying the clergy had misused their roles as religious leaders.

Lile is a board-certified OB-GYN practicing in Florida, who has delivered thousands of babies, instructed OB-GYN residents, and who performs pro-life education and outreach via his ProLifeDoc website.

He published a video message about the clergy’s pro-abortion op-ed, saying that children in the womb are human beings made in the image of God, with tough words for the clerics, both men and women, who’d written the letter.

“And they said - not that we are against this law because we realize that we are created in the image of God at the moment of conception - no, these quote-unquote “men and women of God” were in favor of this new law that allows abortion at any gestational age in the state of Vermont.”

The Vermont Senate gave final approval to Proposal 5, a constitutional amendment establishing a right to abortion, on Friday.

Prop 5, which declares a “right to personal reproductive liberty,” now moves to the Vermont House, and if approved there, it will go before the state’s voters in a November 2022 referendum.

Lile spoke in his video message about how the group said that healthcare is a basic human need, and that individuals should have the right to access the highest level available of healthcare.

He concurred and noted how this then should extend to unborn children.

Lile explained that children in the womb are often given medical treatment, which demonstrates that they are people and should be afforded human rights.

“We are now doing heart surgery - saving lives with heart surgery - to babies in the womb at 22 weeks gestation,” said Lile, “we're doing spina bifida corrective surgery, and we are improving the quality of life for these babies for five, 10 years, even longer.”

“We treat the preborn as patients,” he stated. “If they are a patient, they are a person.”

Tweet This: “We treat the preborn as patients. If they are a patient, they are a person” - Dr. William Lile

Lile said the clergy’s exclusion of the unborn as being deserving of rights conflicts with the state’s constitution.

The preamble said further that these laws are to promote general happiness of the people of this state and to their posterity, Lile pointed out.

“So, the highest law in the land in the state of Vermont says that we are to protect all of the citizens of this state and our posterity,” he added.

This is addressed in the Bible in Matthew Chapter 7, said Lile, where Jesus talked about how His followers should look for wolves in sheep's clothing.

“Well, how do you tell the wolves from the sheep?” asked Lile. “You look at them by their fruits.”

Abortion support from clergy amounts to bad fruit, he said.

“If you're going to look at a letter that is signed by these clergy, who said they are favor of taking the lives of those that are created in the image of God, who are being knit together in their mother's womb,” Lile stated. “That's not good fruit, that is bad fruit, and shame on them.”

“To whom much is given much is required,” he continued. “And when you are sitting in a position of Biblical authority and spiritual authority, and you're using that position to say that it is good to be able to take the lives of God's preborn in the womb - shame on you.”

When their comes the pro-abortion group might claim that as pastors, priests and rabbis they signed the letter that said women deserve high quality healthcare, said Lile, but the Lord will not look favorably upon this.

“So, shame on these clergy,” he said, “and beware these clergy - Because what you are doing is evil in the sight of the Lord.”

In concluding, Lile stated, “We are created in the image of God at that moment of conception, we are knit together in our mother's womb, and God loves us all.”

“We are here to provide high quality healthcare,” Lile said. “And that is extended to those preborn, created in the image of God at that moment of conception. And we will defend them, we will protect them, and we will be a voice for them. God bless you.”