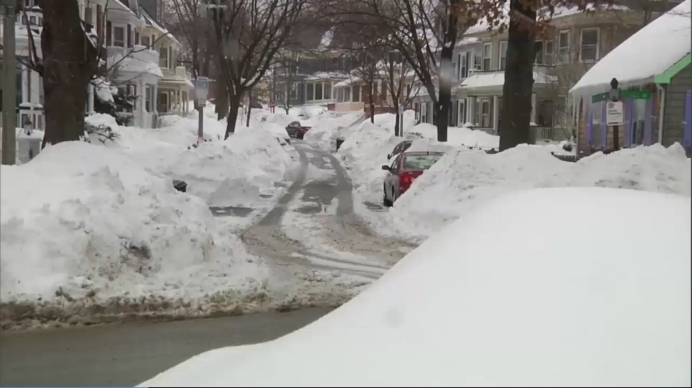 Tweet This: "If our clients can't get here, they can't get to Planned Parenthood either. #Snowmageddon2015

As Winter Storm Marcus threatens to rip through the Northeast portion of the United States again this weekend, pregnancy help organizations in the region are taking on the additional burden of reconnecting with each client whose appointment was canceled due to the record snowfall.

Already hit with a 72.5 inches of snow since Jan. 24—out-snowing locales such as Anchorage, Alaska, and the snowiest city in Lower 48, Crested Butte, Colorado—another foot or more of snow has been predicted for Boston in the coming weekend.

The record-setting storm, being referred to as #Snowmageddon2015 in some quarters, resulted in school closures throughout the Northeast, including in Bangor, Maine, where over 170 closures of schools, government offices and businesses were reported by the Bangor Daily News.

By Tuesday, Feb. 10, however, Bangor’s First Step Pregnancy Resource Center picked up where it left off after only one day’s closure, clocking in a day’s worth of regularly scheduled parenting classes and appointments.

“We had to close the office one day, so all classes and appointments were canceled,” Executive Director Nicole Eggert said. “There was another day that the weather was iffy, but we still opened. It seemed like one after another, all the appointments we had scheduled, the clients called and canceled."

Those canceled appointments, Eggert said, pose an on-going concern for the clients involved, since contact information can be sparse—particularly if a client has never been to the center and filled out an intake form.

While Eggert and her staff are pushing ahead through the storm to serve as many clients as they can, they are also concerned the storm might negatively impact an upcoming abortion recovery group utilizing Surrendering the Secret, slated to begin meeting in coming days.

"It seems like every time we start one of these groups, we just get hit with everything imaginable, from all of the sudden everyone in the office is sick, or we get another blizzard on the day it’s supposed to start, stuff like that," Eggert said.

Although Eggert and First Step Pregnancy Resource Center have been able to continue their work with a minimal dropoff, organizations in various regions of New England remain affected by the storm.

Centers in Boston, including the three locations of A Woman’s Concern, has averaged two to three closures per week over the past three weeks, according to Executive Director Teresa Larkin.

“I’ve lived here most of my life, and I’ve never seen anything like it,” Larkin said. “This is just unbelievable. We’re all hearty New Englanders, so we’re all just grinning and bearing it, because there’s nothing else to do. But it has definitely been very challenging."

Two locations of A Woman’s Concern are situated in areas without parking lots, so the city’s intermittent parking bans and closures of public transportation have had a pronounced effect on the ability of clients and staff to access the building.

Larkin and her staff at the central office are parking at a church three miles away and walking into work at a building that, according to Larkin, looks like its closed due to the snow piled up in front of the windows and entrance.

Tweet This: Teresa Larkin is walking 3 miles to work in the snow. #Snowmageddon2015

While organizations in Marcus’ path battle the weather, many have been able to route their calls to Option Line, the 24-7 pregnancy helpline that has answered over two million calls since 2003.

Organizations affiliated with national and international groups such as Care Net or Heartbeat International are automatically listed on Option Line, but these organizations need to contact Option Line to opt-in to the helpline’s free call-forward service for after-hours or emergency answering and appointment setting.

“Option Line is here, and what we do is answer and tell them that, if schools are closed in the area, a pregnancy center might not be open right then, but they can always try again the next day,” Laycock said. “After a storm like this, we can expect an upswing in calls regarding the morning after pill and other early abortion calls form those areas.”

While Larkin does not expect her locations to be open a full week next week, she remains optimistic that, once the storm tapers off, A Woman’s Concern will pick up where it left off, offering clients hope and help in the midst of a difficult or unexpected pregnancy.

“We’re hoping that we’ll be extremely busy once this passes, because people have just had to wait,” Larkin said. “That’s the hope and the prayer that we’re clinging to, that hopefully the clients will just wait and get to us.”

Has your organization been affected by #Snowmageddon2015? Let us know in the comments!