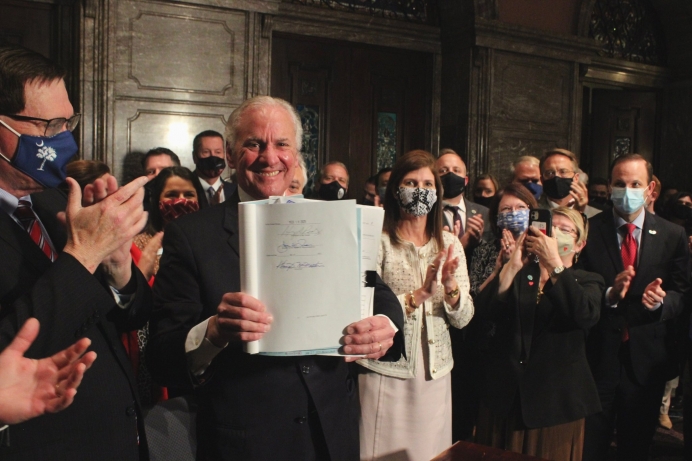 (Live Action) South Carolina Gov. Henry McMaster signed the South Carolina Fetal Heartbeat and Protection from Abortion Act Thursday, banning abortions in the state when a fetal heartbeat is detected. The law took effect immediately following the signing. Pro-abortion groups have announced they will file a lawsuit to try and block the law.

“If there is not a right to life then what right is there? What rights exist if not the elementary, fundamental, profound right to life?” said McMaster. “So we are here to protect it. […] Who possesses the right? We have the duty. Who has the right? All of us have the right. The young, the old, the rich, the poor, the week, the strong, known, unknown, or unborn all have the right to life. […] Our battles are not yet over but I believe the dawn of victory is upon us.”

Tweet This: “If there is not a right to life then what right is there?" - South Carolina Gov. Henry McMaster upon signing the state's heartbeat bill.

The pro-life law includes an exception for cases of medical emergency, though abortion is never medically necessary. There have also been exceptions added for rape, incest, and fetal diagnoses. A doctor who commits abortions after the preborn child’s heartbeat is detectable could face a felony charge, fines, and jail time.

The South Carolina Senate passed the bill in January, and the House passed it on Wednesday despite pro-abortion House members walking out in protest during the debate. One of those House members referred to the bill as a “farce of a vote about pretend life.”

Life inside the womb is not “pretend.” Preborn children are human beings from the moment of fertilization – a scientific fact. The human heart begins to beat between 16 and 22 days post-fertilization before most women even know they are pregnant. At this age, the baby already has eyes and a brain, and her lungs are forming. By six weeks and two days, the baby has brain waves.

More than 10 states have enacted similar laws which are currently blocked by ongoing lawsuits, according to [news station] WCSC.

“Whether somebody challenges or not is up to them,” said McMaster on Wednesday. “That’s what the court’s for.”