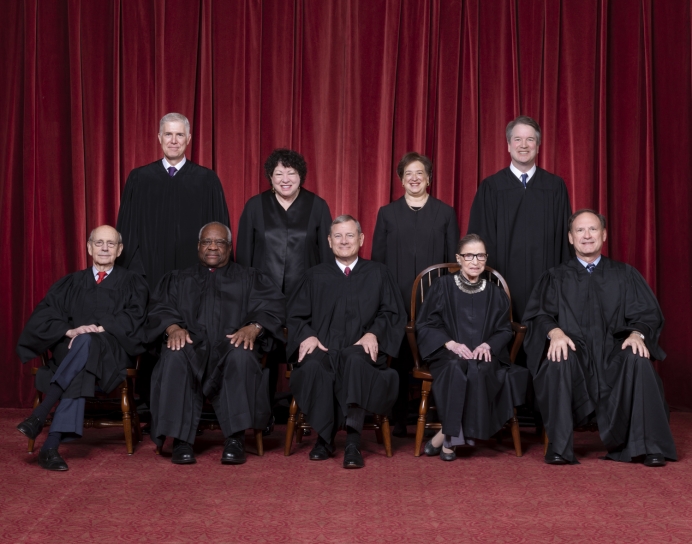 (Live Action) Ruth Bader Ginsburg, the second woman to serve on the Supreme Court of the United States, has died. She was 87 years old.

Ginsburg was originally accepted to Harvard Law School, where she was one of just nine women in a class of 500. She ultimately transferred to Columbia, and tied for first in her class. Ginsburg overcame many obstacles before finding success in the legal field; when she entered academia in 1963, she was one of only 20 female law professors in the entire country.

In 1993, Ginsburg joined the Supreme Court, and with the retirement of Sandra Day O’Connor, became known as the senior member of the “liberal wing” of the Supreme Court, frequently voting in favor of legalized abortion due to her belief that “abortion prohibition… denies [women] full autonomy and full equality with men.” Despite this, she agreed with the majority in Gonzalez v. Carhart who stated that abortion is a “painful and difficult” decision.

While Ginsburg sided with “abortion rights,” a previous Live Action News article noted that her views on Roe v. Wade were a bit more nuanced:

In the past, Ginsburg has criticized Roe as “heavy-handed judicial intervention [which] was difficult to justify,” lamentable because it “had given opponents of access to abortion a target to aim at relentlessly,” thereby “stopp[ing] the momentum that was on the side of change.” Instead, she would have rather seen the court “put its stamp of approval on the side of change and let that change develop in the political process.”

Ginsburg was also known for her advocacy in favor of women’s equality and for people with disabilities. Before her death, she had fought cancer five times, ultimately succumbing to a recurrence of metastatic pancreatic cancer. Ginsburg, a mother of two, was preceded in death by her husband, Marty.

Former President Bill Clinton, who nominated Ginsburg to the Supreme Court, issued a statement on her death, saying, “With the passing of Ruth Bader Ginsburg, America has lost one of the most extraordinary justices ever to serve on the Supreme Court. She was a magnificent judge and a wonderful person — a brilliant lawyer with a caring heart, common sense, fierce devotion to fairness and equality, and boundless courage in the face of her own adversity.”

President Trump likewise reacted sadly to Ginsburg’s passing, calling her a “titan of the law” with a “brilliant mind” who fought for women and people with disabilities.

Statement from the President on the Passing of Supreme Court Associate Justice Ruth Bader Ginsburg pic.twitter.com/N2YkGVWLoF

Other tributes poured in, including from Christopher Scalia, son of former Supreme Court Justice Antonin Scalia. Ginsburg and Scalia had a close friendship, regularly attending the opera together, sharing New Year’s Eve together with their families, and traveling together overseas. Ginsburg once recalled how Scalia would deliver his dissent to her early, so she would be able to properly respond to it. Despite their frequent professional disagreements — Ginsburg as a liberal justice and Scalia as a conservative — they remained, as Ginsburg put it, “best buddies,” and never let their political views come between their friendship. Ginsburg even delivered a eulogy for Scalia at his memorial service.

Justice Ginsburg’s fellow Supreme Court justices issued statements honoring her service to the court, as well as her personal character.

“Our nation has lost a jurist of historic stature,” wrote Chief Justice John Roberts. “We at the Supreme Court have lost a cherished colleague. Today we mourn, but with confidence that future generations will remember Ruth Bader Ginsburg as we knew her — a tireless and resolute champion of justice.”

“Through the many challenges both professionally and personally, she was the essence of grace, civility and dignity,” Justice Clarence Thomas stated. “She was a superb judge who gave her best and exacted the best from each of us, whether in agreement or disagreement. And, as outstanding as she was as a judge, she was an even better colleague – unfailingly gracious, thoughtful, and civil.”

“For forty years, Ruth served the American people as one of our most distinguished judges,” Justice Neil Gorsuch said. “Her sacrifices for the country were many, but always performed with honor. We are blessed by the happy memories that will remain, like traveling with Ruth to London where (to her delight) an uninformed guide kept calling her ‘Ruthie,’ or all the opera she tried so valiantly to teach me, or her sweet tooth at lunch, or the touching stories of her remarkable life with Marty. We will miss Ruth and our hearts go out to her family. May she rest in peace.”

“No American has ever done more than Justice Ginsburg to ensure equal justice under law for women. She was a cherished colleague, and she inspired me, and all of us, with her unparalleled work ethic and devotion to the law,” Justice Brett Kavanaugh said, adding, “Justice Ginsburg paved the way for women to become lawyers and judges. She made it possible for women and girls like my daughters to compete on equal footing as student-athletes. When Justice Ginsburg was last in my office earlier this year, I pointed out a photo I keep of her standing with four women who served as law clerks in my chambers in my first term. As long as I am fortunate enough to serve on the Supreme Court, I will keep that photo prominently in my office as a continuing tribute to Justice Ginsburg and as a daily reminder to work hard and pursue equal justice.”

Live Action founder and president, Lila Rose, called for prayers for Ginsburg and her family, writing, “Rest in peace, Ruth Bader Ginsberg. Let’s pray for the repose of her soul and for her family. Let’s continue to pray for our nation.”

Tweet This: “Rest in peace, Ruth Bader Ginsberg. Let’s pray for the repose of her soul and for her family. Let’s continue to pray for our nation.”