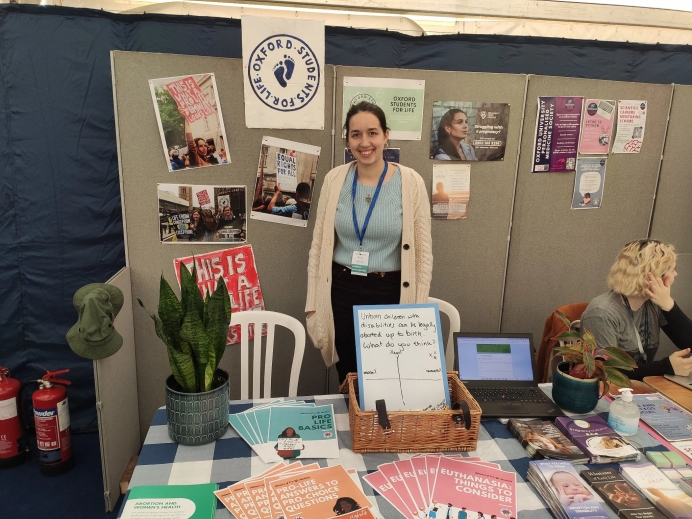 ‘They’re not going to succeed’: Pro-life societies stand firm in face of opposition on England’s campuses

(CNA) There is no better time for Oxford University’s 400 clubs and societies to recruit new members than at the Student Union’s Freshers’ Fair, held annually in October.

Students embarking on their freshman year — known as “freshers” in England — walk around stalls run by groups devoted to everything from anime to mixed martial arts.

But one society was almost deemed too controversial for the event, held in marquees in the University Parks on Oct. 6-7.

The Student Union attempted to block Oxford Students for Life (OSFL), a secular pro-life group, from exhibiting at the Freshers’ Fair.

The authorities at the English-speaking world’s oldest university reportedly responded by saying that if the representative body for Oxford students went ahead, then the Freshers’ Fair could not be held on university grounds.

OSFL president Anna Fleischer told CNA that the group had expected some opposition during the two-day event, but wasn’t prepared for what came next.

“We anticipated some people not liking the fact that we were there,” she said in a phone interview on Oct. 25. “That was always going to happen and has happened in previous years.”

“People will give you funny looks or come and argue with you. But I don’t think we quite anticipated just how much backlash there would be.”

On the second day, a small group sought to stop others from approaching the stall. The protesters left but then returned with a black trash can, which they attempted to fill with OSFL’s promotional materials.

“The two committee members who were on the stall tried to take things and put them behind the stall so that they wouldn’t go in the bin,” Fleischer told the Christian Institute, a non-denominational Christian charity.

“But then [the activists] came behind the stall and started tearing down all the posters off the backboards and then shoved them in the bin and then tried to leave.”

The incident at Oxford, regarded as one of the world’s top universities, was part of a pattern of aggressive opposition to pro-life groups on English campuses.

Tweet This: Aggression toward the Oxford Students for Life group is part of a pattern of aggressive opposition to pro-life groups on English campuses.

Members of a pro-life society at Exeter University, southwest England, recently reported receiving death threats as a petition seeking to “strike down” the group gained more than 9,000 signatures.

Fleischer said that activists appeared to be motivated by two beliefs.

The first is the conviction that abortion is a human right, despite its absence from the world’s major human rights declarations.

The second is that those with opposing views are guilty of a form of “violence” and therefore must forfeit their place in the public square.

“I think there’s quite a disruptive idea that’s become quite normalized,” she said. “You’re taking something that is fundamentally a good thing — that we should be sensitive in how we talk to each other, and words can be harmful — but conflating that with [the belief that] the way to address ideas you think are harmful is to just shut them down, rather than address them.”

She went on: “There’s a lack of recognition that both sides of the argument have goodwill. Saying horrible things just to spite someone: Yes, that is a horrible thing to do and none of us should be doing that. But there’s a big difference between that and holding a good-faith position that you want to articulate in a kind way.”

Tweet This: “They could try, but they’re not going to succeed” - Oxford Students for Life president on pro-abortion attempts to ban her group

Fleischer pointed to an Oct. 12 statement condemning the university authorities’ decision to support OSFL’s presence at the Freshers’ Fair.

“They quoted from some university code about not being supportive of ‘violence, intimidation or criminality,’ and then went on to accuse us of intimidation, ignoring the fact that the protest against us ticked all three boxes of being — well, not violent against a person — but physically aggressive, intimidation and criminal destruction of property,” she said. “It was somewhat ironic.”

A spokesperson told The Oxford Blue newspaper that the university supported students’ right “to express views of all persuasions within the law.”

“We therefore condemn last week’s protest against the Oxford Students for Life stall at the Freshers’ Fair, which was an attempt to deny the right of expression to others,” the spokesperson said. “We have a robust freedom of speech policy which states ‘Within the bounds set by law, all voices or views which any member of our community considers relevant should be given the chance of a hearing.’ We require all events held on university premises to abide by this policy.”

Despite the protest, the OSFL stall also prompted positive responses during the Freshers’ Fair, Fleischer said.

Referring to online abuse that forced OSFL to close comments on its Instagram account, she added: “There are a lot of people sending us really lovely messages of support and we’re so profoundly grateful for them. In the midst of all the abuse that you’re getting, it can really get to you, and then when you get an email being like, ‘Well done, you guys, I’m so proud of you,’ that is really lovely.”

OSFL is determined to take part in next year’s Freshers’ Fair. By the time it takes place, the U.K. Parliament may have passed a bill intended to defend freedom of speech on campuses.

The Higher Education (Freedom of Speech) Bill is currently at the report stage in the House of Commons, Parliament’s lower house.

Fleischer said that if the bill becomes law, “it’ll be even harder for them to get rid of us next year.”

“They could try, but they’re not going to succeed,” she said.

“And if they do succeed, they can’t stop us advertising ourselves. And banning us, if anything, might just give us even more publicity — and the point of a freshers’ fair is to get publicity for your society.”

“So it would be rather counterproductive for them to try and ban us, because we could always just advertise in other ways. And I’m sure we’d get a lot more publicity, as being ‘the banned society.’”