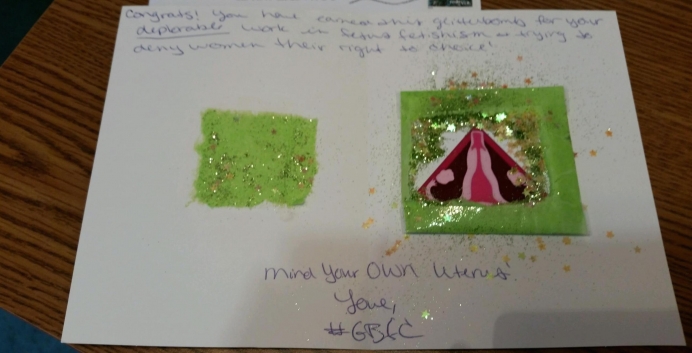 Pro-choice group, Glitter Bombs For Choice (GBFC) has taken credit for at least six so-called “glitter bombs” in California, eight more in Ohio, with one report of a mailing to a pregnancy center in West Virginia, according to Heartbeat International, in the past week.

These “glitter bombs” are typically hand-written cards with a small, sealed packet of glitter inside. When the card is opened, the glitter packet ruptures, sending pieces flying everywhere.

The mission of these special deliveries, according to GBFC’s website, is to annoy:

Carol Dodds, Executive Director at A Woman’s Friend, Marysville, California, states that at least six other California locations received this “bomb” on the same day.

Says Dodds, “We were all kind of excited to receive ‘hate mail’. It shows that we are making headway into their territory.”

The letter, which reads, in part, “wouldn’t it be nice if you didn’t have to lie to save the baybeez”, [SIC] also includes the unlikely federal cancelled-post mark of a mother and child, honoring Mother’s Day.

“God’s last laugh,” was how Dodds described the contrast between the sweet picture on the front and the childish message inside.

California centers are vocally campaigning against state Assembly Bill 775, a bill that would force pregnancy centers providing women with abortion alternatives to refer women for abortions.

While the “glitter bomb” campaign is new to pregnancy help organizations, it joins a growing list of national pro-life organizations that have received the mailings in recent weeks. Abby Johnson, pro-life activist and former Planned Parenthood employee, said she has received 21 “glitter bombs” at the time of this writing.

Tweet This: @AbbyJohnson has received 21 "glitter bombs" to date... pregnancy centers next in line.

In March, Nebraska Rep. Jeff Fortenberry (R) also received a “glitter bomb.” The FBI was called in to investigate but, according to local NBC affiliate WOWT, it was determined that the message was not illegal because no threat was stated.

In an interview with online Jezebel.com, a person claiming to represent GBFC, with the unlikely pseudonym of “Geeves Bananahammock,” responded to the incidents.

"If you would please make it clear that we are a rogue group not affiliated with any other pro-choice organization that would be awesome," Geeves writes. "We are not done. Far from it."

Life News used their glitter bomb “attack” in a subsequent PR-push to supporters, which Jezebel and Huffington Post mocked as a “quick moneymaking campaign”.

Other pro-abortion activists seem to be intrigued by this new method of annoyance. One person commented at Jezebel.com: “So you're saying I can print that out, fill it with glitter, and mail it to my local #$% of a representative? Because that is DONE AND DONE.”

Melissa Geiger, Office Manager for Pregnancy Support Center, Canton, Ohio, initially wondered if the episode was prompted by the recent victory of the Ohio Pregnant and Parenting Support Program, “[a] pilot program, started in 2013, [which] allocates state money to centers which provide parenting classes and material assistance to disadvantaged families.”

A Heartbeat International representative suggested Geiger file a police report, in case other incidents occur. The Postal Inspector has also been notified, to determine if GBFC has committed a federal crime.

Tim Welsh, President & CEO of Pregnancy Decisions Health Center, a seven-location organization in greater Columbus, Ohio, termed it, “a nuisance, a prank; nothing we are concerned about.”

Welsh, involved in the pro-life movement for over 40 years, considers the whole incident a “gigantic distraction” and advised other centers to stay focused on the true mission.

“The enemy wants us to care about this,” Welsh said. “We won’t win points in the media for being ‘victims.’ Let’s keep our heads down, focus on caring for these women and their unborn children.”

While it is unclear if any criminal charges would hold water—there are, after all, websites that sell and send “glitter bombs”—Heartbeat International is encouraging pregnancy help organizations to make the most of the opportunity by creatively engaging donors and emphasizing their life-affirming services to the broader community.

“Even if the stated purpose of these mailings is to annoy us, there’s not getting around the fact that we’re just getting glitter in the mail, so why not take advantage of it,” Betty McDowell, Director of Ministry Services for Heartbeat International said. “Our pregnancy help network reaches, rescues, and renews entire communities for life, and we welcome any chance to let people in on what God is doing in the lives of women and families every day at our affiliates.”