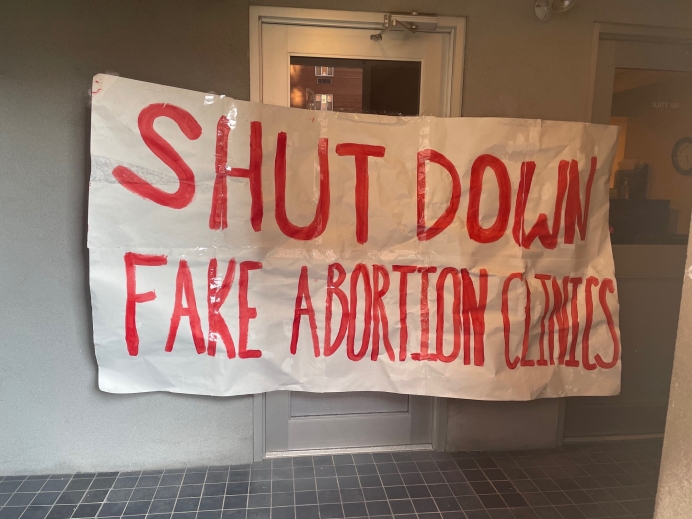 When protesters come to call

Amy Scheuring, of Women’s Choice Network (WCN) has over three decades of experience in pregnancy help ministry and as its Executive Director she has garnered expertise in dealing with opposition from pro-abortion groups.

The most recent attack against the Pittsburgh-area pregnancy help medical clinic ironically was raging as staff members were anticipating the arrival of women who have suffered post abortive trauma.

This group was gathering to support one another in the abortion recovery healing process and the WCN staff was concerned the presence and actions of protestors would be very unsettling to these women.

Despite abortion agitators' ugliness and unrest at her center as women were scheduled to arrive for post-abortion support, Scheuring points to trust in God and recalling the humanity of pro-abortion protesters as important.

Choose Life Marketing posted on social media about the attack:

They banged on their windows, chanted through a bullhorn, and demanded the center's staff come out and speak to them. The center called the police, but before the group left, they plastered this sign over the only entrance to their space.

Ironically, while the activists were banging on their door and posting their sign, a handful of women were making their way to their center to participate in BREATHE, an After Abortion Care Group for women suffering after a past abortion.

Pregnancy centers around the country need our support and prayer. They are on the frontlines serving women, and threats to their safety are unacceptable. Give to your local pregnancy center today if you can!

Scheuring was called and immediately traveled from her office location to the center to hopefully resolve the situation. Her thoughts were with the post-abortive clients and what they already carry around and how this scene would affect them.

Thankfully Scheuring was successful in removing the sign fake clinic smear sign before the first client even arrived.

In addition, pro-abortion agitators chalked pejoratives on the sidewalk and the center's sign was spray painted.

“We have to focus on what we do rather than what crazy things these protestors are doing,” stated Scheuring.

Scheuring has a gift for seeing past the anger and rhetoric and into the hearts of these individuals.

“People are angry because they feel something has been taken away from them,” Scheuring remarked. “That they’re threatened as well—not sure they know why they feel angry, but they are angry.” 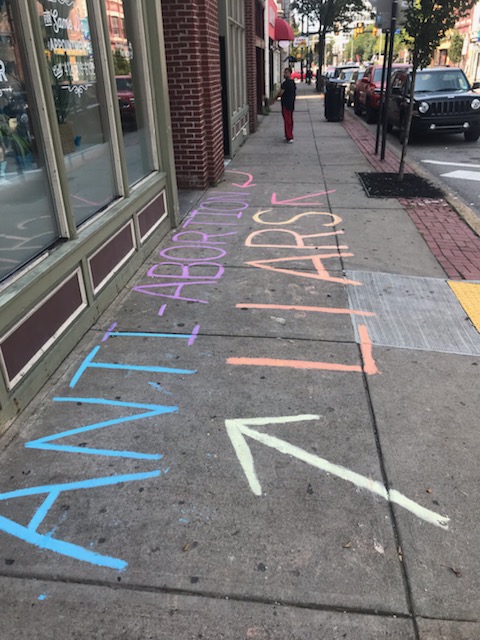 Scheuring has presented workshops on how centers should respond when protestors take their aim.

“It is more about just standing firm rather than doing anything,” said Scheuring.

Standing firm is challenging as false accusations ring out over a bullhorn in front of your center. WCN has weathered other pro-abortion offensives, including a 2017 protest, and Scheuring has noticed that the pro-abortion protests have intensified. The tactics of these groups have evolved as well.

“This group began with vandalism on the sidewalk, painting over the center’s sign and ramped up from the protests seen before which were more peaceful in the past,” reported Scheuring. “The difference is it is more violent and threatening, the rhetoric is more threatening.”

“We all noticed as opposed to a few years back from DSA (Democrat Socialists of America) protests – banging on windows and yelling through bullhorn demanding we come out and engage with them. More threatening and different tone than we’ve seen in the past.”
The perpetrators have become more organized, bankrolled, and persistent.

“We used to look to one or two sources and know what they were doing,” Scheuring said, “now there are other players involved—a cottage industry has emerged now to pay for these activities.”

Scheuring compared the protests four years ago with this latest attack.

“Up until now it was localized and shallow,” she said. “This is more ramped up—it persisted over a couple of weeks. This seems a little bit more enduring.”

At the 2017 protest the fruit of WCN’s life-saving work served to counter aspersions flung by abortion activists. As Scheuring went out to engage with pro-abortion protesters making accusations about the WCN staff’s practices, a man stepped forward seemingly out of nowhere.

Apparently familiar with the WCN center, he pointed to his two-year-old son and told those present that his son was supposed to be an abortion. The man defended the center, said now he has a son and, “he has changed my life.”

The presence and testimony of this real-life client effectively dismantled the protest group’s narrative and they promptly decided to call it a day and go home.

Sheuring advises pregnancy help centers to look past challenges of such offensives, seize opportunities, and trust God, which will ultimately reveal the strengths in one's staff and ministry.

“When we serve faithfully and consistently with respect, integrity and excellence, our clients come to our defense,” Scheuring said.

Further ideas of encouragement she offers; Being the object of false accusations puts a ministry in the company of Sts. Joseph and Paul, and Christ Himself; being targeted signifies a ministry’s effectiveness; defensiveness honors the accusation; be gracious, listen, seek to find common ground and work to understand; direct anger toward the real enemy and respond to protesters instead with love; don’t give up, rally the team and communicate with donors.

Succumbing to fear will negatively impact effectiveness and leaves faith out of the equation, she said.

Fear makes a lousy leader, Scheuring says, stating, “Fear happens when we project into the future but without God.”

The actual outcome of these attacks for WCN has been increased client numbers, increased visibility, increased donor commitment, a strengthened team, better systems and confirmation of their mission and calling.

These fruits demonstrate God’s benevolence toward those who protect His gift of life. In that same spirit, Scheuring admonishes pro-life advocates to stay the course and recognize that all people are redeemable.

Editor's note: Heartbeat International, which manages Pregnancy Help News, has resources available for pregnancy help organizations to prepare for offensives against their life-affirming ministry. To learn more contact This email address is being protected from spambots. You need JavaScript enabled to view it.. This article has been updated with additional information.