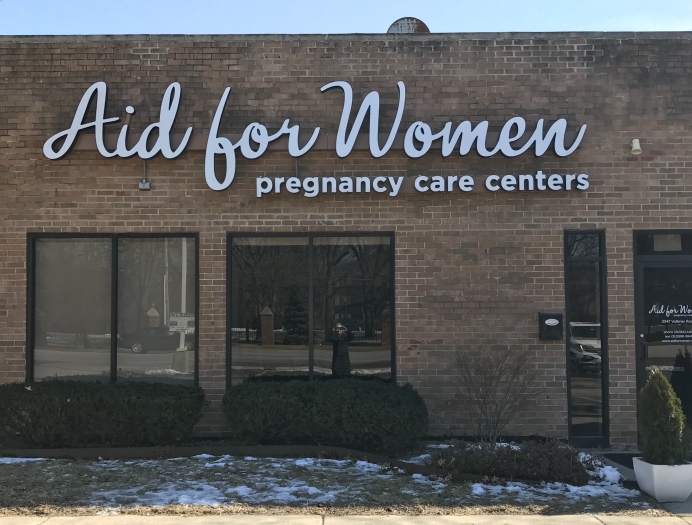 “You Can See God’s Hand in It All”: Chicago Pregnancy Center Opens Next Door to Planned Parenthood

So together with a small band of pro-life friends, they held a meeting in the Cortes’ living room and quickly formed a grassroots group that would come to be known as Southland Coalition for Life. They adopted three goals: to educate the community about the sanctity of life; to initiate a movement of prayer within homes, churches and at the Planned Parenthood abortion clinic; and to open a pregnancy help center to make life-affirming pregnancy options and support available to women in the community.

The last goal, Cortes knew, would be the greatest gift of all. That became all the more clear when they met with Aid for Women—a Chicago-based pregnancy help organization with four center locations and two maternity homes located in the Chicago metropolitan area. The two groups quickly established a partnership and secured a location right next door to the Planned Parenthood facility.

Fundraising and construction took place throughout 2018 with several hurdles overcome along the way, thanks to the support of many church groups, organizations, families and individuals. Operation Nehemiah, a faith-based group that assists with disaster relief and rebuilding initiatives for non-profits, provided the much-needed renovations, even working through some of the Chicago area’s worst days of winter. The Knights of Columbus national and local councils also provided their support, including a new ultrasound machine through their ultrasound initiative program. 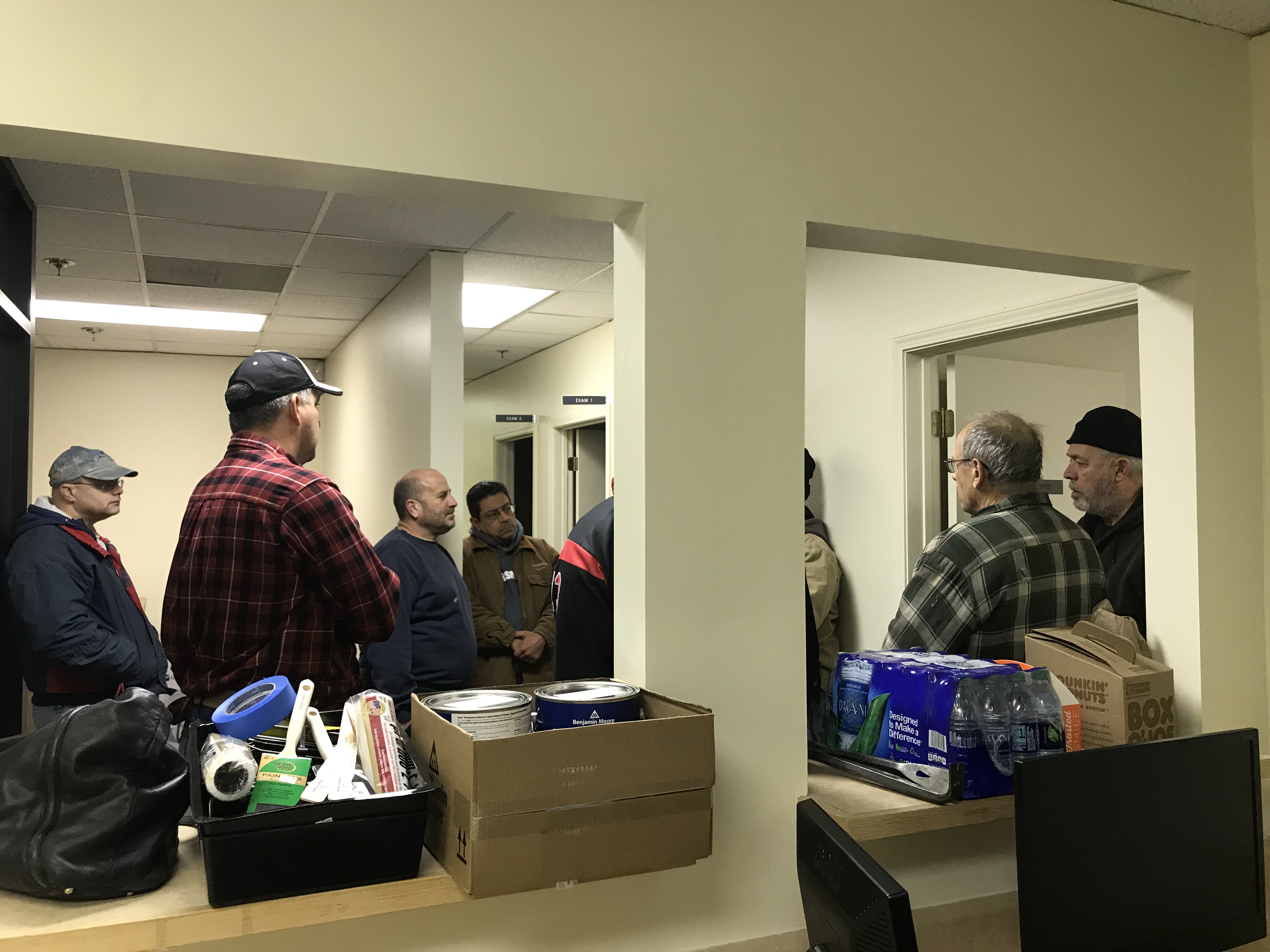 “It was just amazing how so many people of good will really rolled up their sleeves and made this happen,” said Susan Barrett, executive director of Aid for Women. “Just starting off that way was just a really, really neat thing.”

The ribbon-cutting ceremony was held on February 24, just a little more than a year after Planned Parenthood opened. According to Cortes, about 150 people turned out for the event. The center was filled with tradesmen, businessmen, Democrats, Republicans, and people from many different ethnic groups and religious denominations.

“In an age of increasing divisiveness, it was encouraging to see a wide spectrum of our business, community and religious leaders coming together to show their support—all united to affirm the value of life,” Cortes said. 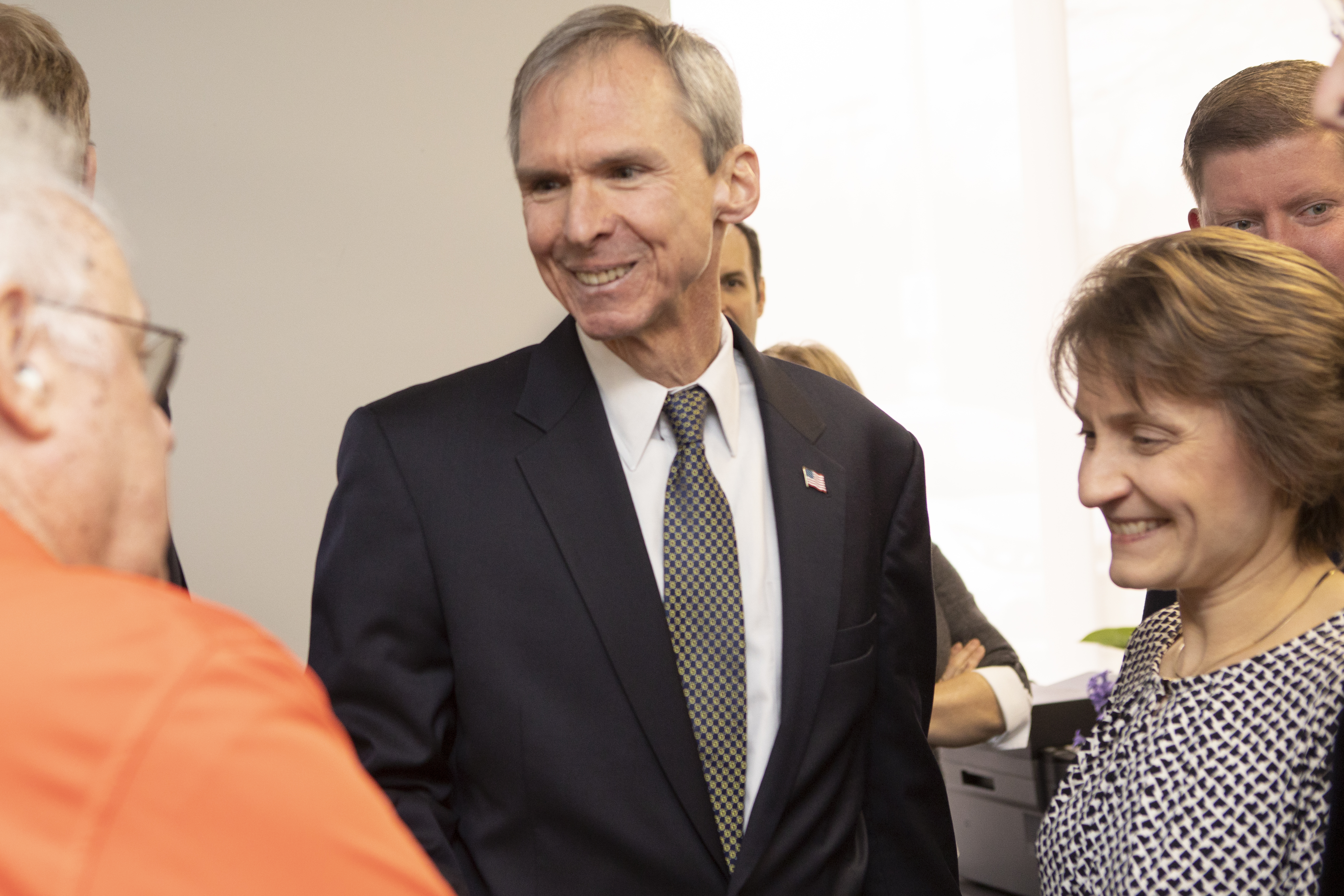 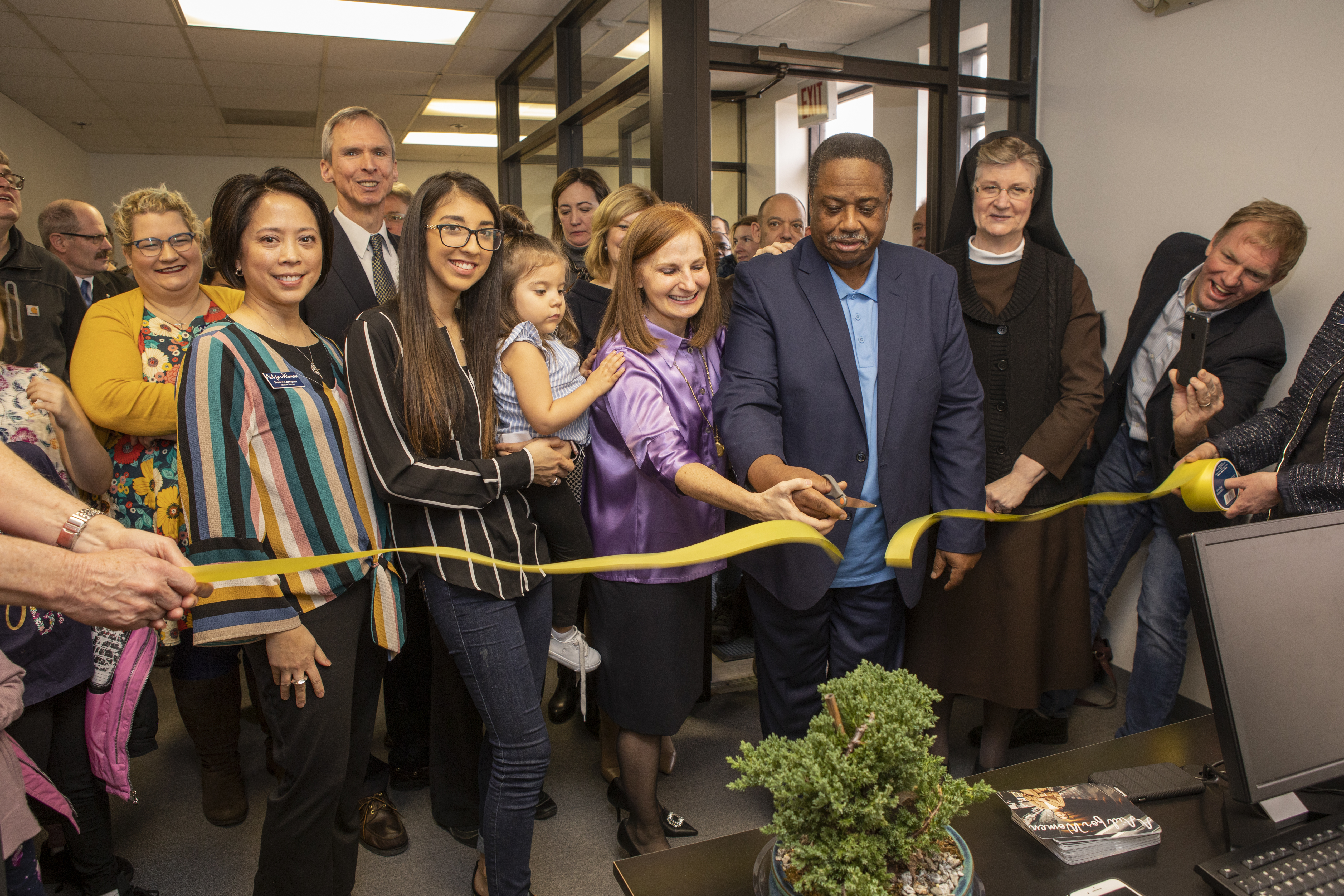 Aid for Women client Rayanna with her daughter (both center) alongside Kris Cortes (center right) at the ribbon-cutting in February | Photo Courtesy: Aid for Women Flossmoor

To Cortes, the diversity in representation at the event was remarkable to see—especially in what she calls “a liberal bastion in the south suburbs of Chicago.”

“Looking around the room, people kept commenting, ‘This just doesn’t happen in America anymore,’” she said. “This is what America is—when we rally around a unified cause, all of those different ways that people are trying to box you in and categorize you, they just go away.”

The Abortion Capital of the Midwest

That hopeful outlook is particularly important in Illinois, where the state’s governor promised this January to pursue a more aggressive pro-abortion policy than even New York.

Illinois lawmakers are currently considering their own Reproductive Health Act (RHA), which like similar bills in other states would codify a “fundamental right” to abortion, establish “that a fertilized egg, embryo, or fetus does not have independent rights under the law,” and repeal numerous restrictions and regulations on abortion including the ban on late-term abortion. The Senate version, which cleared a committee vote [in March], also repeals the state’s parental notification requirement, the State Journal-Register reported.

Last month, an estimated 4,000 pro-lifers “filled the State Capitol to capacity” to protest the legislation. For as extreme as the proposed abortion bills are, the state has actually been on a pro-abortion track for years, funneling taxpayer funding to abortions via Medicaid and even forcing pro-life pregnancy centers to promote abortion.

“What we’re seeing is that because of easy access to abortion in Illinois and free abortion in Illinois, it’s becoming this kind of place where all of these abortion clinics are moving in because it’s good for business for them, but it’s not good for us in our local community,” said Barrett. “That’s why Aid for Women decided to get involved. It wasn’t enough just to say how unfortunate things are. We needed to take a leap of faith and expand our presence into a community being targeted by Planned Parenthood.”

Tweet This: "We needed to take a leap of faith and expand our presence into a community being targeted by Planned Parenthood.” #prolife

Cortes says that the state’s already permissive abortion laws have made Illinois a destination to have abortions. Indeed, the state abortion report shows there has been an uptick in abortions performed on out-of-state visitors in recent years. In 2017, nearly 40,000 abortions were recorded in the state of Illinois. Over 5,500 of them were on out-of-state residents.

One reason, Cortes said, is because of the 2017 law which forces Illinois taxpayers to fund abortions through Medicaid. Because of the state’s lenient residency requirements for Medicaid recipients, women can come to Illinois, establish temporary residence, have an abortion, and go home.

“Illinois is like the Google pin on a map because we are becoming like the abortion capital of the Midwest,” Cortes said.

She added that Planned Parenthood’s recent invasion of Flossmoor is directly connected to targeting a Medicaid-eligible audience.

“Planned Parenthood, with their big-budget research arm, knew that’s where they wanted to expand,” she said, noting that the community has a strong minority base.

Tweet This: As Illinois becomes the "abortion capital of the midwest," this #prolife pregnancy center is taking a stand for families in need.

Planned Parenthood, which has historically targeted minority populations, reported $1.6 billion in revenue last year, with over half a billion coming from taxpayers.

Cortes says that the opening of the new Aid for Women center represents a major triumph in the “David and Goliath” tale between the local pro-life community and Planned Parenthood.

“It’s a beautiful testament of rallying around a unified vision that, you know, we wanted to give women in the community a true choice—one of love and tangible support so that they can continue to pursue their dreams and their goals and also have the option of choosing a better life for their child and a better life for their family,” Cortes said.

“A Safe Refuge for Women”

According to Barrett, there are dozens of abortion clinics in the Chicago area, and Aid for Women’s pregnancy help centers are on the front line of the abortion battle, serving approximately 4,000 women each year. Since 1978, Aid for Women has provided a safe refuge from abortion providers for women who are facing unexpected pregnancies.

All of Aid for Women’s services are offered at no charge and include: a 24-hour helpline, pregnancy tests and ultrasound exams, one-on-one support, Abortion Pill Reversal, an Earn-While-You-Learn program, parents-to-be support groups, and medical and community referrals.

Barrett said that the decision to expand Aid for Women’s services and provide housing for pregnant women and their children was based on knowing that many women choose abortion because they lack adequate housing or will be otherwise homeless if they choose life. Aid for Women opened their first maternity home, Heather’s House, in 2011 and their second home, Monica’s House, in 2015 as a transitional home for new mothers and their children as they move toward independence.

Rayanna is just one of the thousands of women Aid for Women has helped.

“Going to Aid for Women was the best decision of my life,” she said at last month’s grand opening. “They gave me so much. Got me through a very difficult time, they provided my child and me a home, and made me feel like I had hope again. That’s why I’m where I am today—I am a mother, and I did it. Coming from feeling alone in an unexpected pregnancy, to doing everything for myself, having our own home, having a good job, having a car, and doing it on my own.”

“You Can See God’s Hand in It All”

With its biggest task accomplished, Southland Coalition for Life is now furthering its efforts to spread education and prayer throughout the community, organizing a 40 Days for Life prayer campaign outside of the Flossmoor Planned Parenthood during Lent.

That campaign, along with Aid for Women’s new location, is making the pro-life community’s presence very apparent in Flossmoor.

Both Aid for Women and their next-door neighbor Planned Parenthood have strong street visibility.

“It’s providential that the space next door to Planned Parenthood was vacant. We’re both very aware of each other,” said Barrett.

A street view of Planned Parenthood and Aid for Women's proximity to one another | Photo Courtesy: Aid for Women Flossmoor

Overall, their reception into their new location has been quite positive.

"We’ve only been open a couple of weeks and have already helped quite a few women there so we feel that kind of having that visibility from the street will be very helpful,” Barrett said.

As Barrett anticipates continued growth at the new location, she remains in awe of how it all came together in just a year.

“I think for this small group of people to respond so quickly and so effectively...you can see God’s hand in it all,” she said.