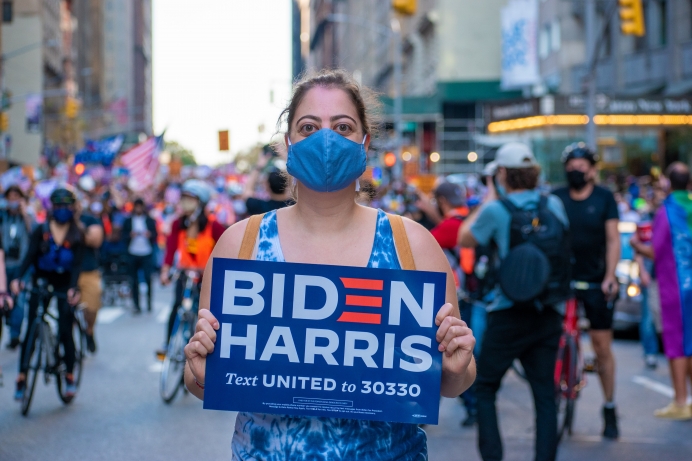 Abortion advocates push for big changes in 2021 under Biden administration

(CNA) Looking ahead at 2021, abortion advocates are hoping the incoming presidential administration will bring policy changes and new personnel who are sympathetic to their goals.

Tweet This: Abortion advocates are hoping the incoming presidential administration will bring policy changes & new personnel sympathetic to their goals.

“Planned Parenthood is committed to partnering with the Biden-Harris administration to ensure sexual and reproductive health doesn’t take a backseat in health policy and when making appointments,” said Alexis McGill Johnson, president and CEO of Planned Parenthood and Planned Parenthood Action Fund, in a December 31 essay in Elle.

“On day one, we want Biden to issue an executive order that demonstrates the administration's commitment to advancing health care access and rolling back harmful policies like the Title X gag rule, which has blocked patients from accessing care at Planned Parenthood health centers,” said Johnson.

Johnson called for the Biden-Harris administration to “make critical updates” to Title X, in order for more people to benefit from its funds. She did not elaborate in the essay as to what these “updates” would be.

“Finally, Planned Parenthood will continue to advocate for the appointment of diverse reproductive health champions to executive and judiciary vacancies,” said Johnson.

Johnson is hopeful that the Biden administration will repeal the Hyde Amendment “for good.” She called the Hyde Amendment, a 1977 law which prohibits the use of federal funds to pay for abortion services, “a discriminatory policy that blocks people who get their health insurance through Medicaid or other government-funded programs from accessing coverage for safe, legal abortion.”

President-elect Biden had previously supported the Hyde Amendment and voted for it numerous times throughout his time in the Senate. Over the course of a 24-hour period in June 2019, Biden changed course, following five decades of support for the policy, and announced that he was now in favor of repealing the Hyde Amendment.

Vice President-Elect Kamala Harris took credit for Biden’s abrupt about-face on the Hyde Amendment. In 2021, said Johnson, abortion advocates “must fight for policies that ensure every single person, regardless of their income or zip code, can actually access sexual and reproductive health care.”

Ilyse Hogue, president of NARAL, had similar sentiment as Johnson. Speaking on a podcast, Hogue was concerned that the makeup of the Supreme Court could result in Roe v. Wade being overturned.

“We’re certainly preparing with our partners in the movement for [the overturning of Roe],” said Hogue. She said that much of her organization’s work recently “has been about making sure that we have what we call ‘islands of access’--blue states that are codifying the right to abortion, making sure that we have like practice in place where women can go.”

Many states, including New York, have moved to codify a right to have an abortion into state law. Should the 1973 Roe v. Wade decision be overturned, it would be up for states to decide their own abortion policies.

Hogue stated that she would support the creation of a “women’s health czar” in the upcoming administration. “It would send such a clear message that the terrible era that Trump ushered in is over,” said Hogue.

Biden, a Catholic, has previously pledged to codify the right to abortion into federal law.

“Number one, we don’t know exactly what [Justice Amy Coney Barrett] will do, although the expectation is that she may very well move to overrule Roe, and what the only thing--the only responsible response to that would be to pass legislation making Roe the law of the land,” said Biden in October.