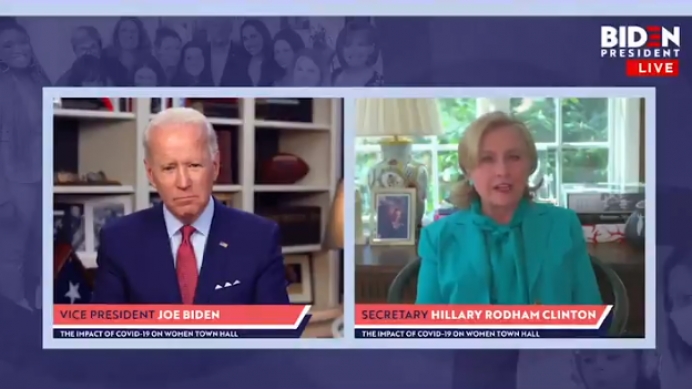 (CNSNews.com) – As he basked in Hillary Clinton’s endorsement of his presidential campaign on Tuesday, former Vice President Joe Biden underlined his shift on the issue of abortion, describing it as “an essential health care service” during the coronavirus pandemic.

“We need to ensure that women have access to all health services during this crisis,” Biden said during a virtual town hall with Clinton. “Abortion is an essential health care service.”

“It’s being used as a political wedge right now,” the presumptive Democratic presidential nominee continued. “And it shouldn’t be. The American College of Obstetricians and Gynecologists and the American Medical Association agree that it shouldn’t be categorized as a procedure that can be delayed. It can’t.”

“And in this case, health care delayed mean health care denied,” Biden said, as Clinton listened and nodded. “States should not be using a public health crisis to infringe on a woman’s constitutional right.”

“Well look, I think you’re going right down the path that people need to follow you on,” Clinton said after his remarks, which also included references the Affordable Care Act and healthcare costs.

Biden was evidently reading from or reciting prepared remarks; a fact sheet released by his campaign on Tuesday included those sentences, with minor differences.

The fact sheet went on to say:

If Biden was President today, he would put science over fiction and ensure states treat abortion as the essential health service it is. This builds on his existing women’s health care agenda. His Justice Department will stop the rash of state laws that so blatantly violate Roe v. Wade. And, he will work to codify Roe, repeal the Hyde Amendment, restore federal funding for Planned Parenthood, including through Medicaid and Title X, and restore access to contraception coverage.

Tweet This: "If Biden was President today, he would put science over fiction and ensure states treat abortion as the essential health service it is"

It was the latest move on the abortion issue by Biden, a Roman Catholic, who reversed his opposition to the Hyde Amendment just ten months ago. That measure prohibits federal funding of abortion except in cases of rape, incest, or when the mother’s life is endangered.

She said in a statement Biden “has not only aligned himself with the failed agenda of Hillary Clinton, which the American people soundly rejected in 2016 when they elected President Trump – a major political liability for him – he has raced further to the left than any nominee before him in his bid to appease the radical abortion lobby.”

“Democrats used to call for abortion to be ‘safe, legal and rare,’ and now they deem abortion on demand at all costs ‘essential’ even during a pandemic,” Dannenfelser said.

As Biden stated, both the AMA and ACOG issued statements last month opposing any moves to limit abortions during the coronavirus pandemic.

AMA president Patrice Harris said it was “unfortunate that elected officials in some states are exploiting this moment to ban or dramatically limit women’s reproductive health care, labeling procedures as ‘non-urgent.’”

“To the extent that hospital systems or ambulatory surgical facilities are categorizing procedures that can be delayed during the COVID-19 pandemic, abortion should not be categorized as such a procedure,” ACOG said in a joint statement with several other medical bodies.

“Abortion is an essential component of comprehensive health care,” it said. “It is also a time-sensitive service for which a delay of several weeks, or in some cases days, may increase the risks or potentially make it completely inaccessible.”

In response, the American Association of Pro-Life Obstetricians and Gynecologists, said ACOG did not represent its membership in the position statement, since more than 85 percent of obstetricians and gynecologists “do not perform abortions.”

“Continuing to perform elective abortions during a pandemic is medically irresponsible,” the pro-life association said. “Abortions use up much needed resources such as masks, gloves, and other personal protective equipment. The practice also potentially generates more patients to be seen in already overburdened emergency rooms.”

Biden was long opposed to the Hyde Amendment, but that changed last summer. After his campaign confirmed his ongoing opposition, he was criticized by rivals in the Democratic primary. Twenty-four hours later, Biden said he had changed his position, and now supports its repeal.

As Dannenfelser alluded to, abortion-related language in the Democratic Party platform has evolved over recent decades.

The party’s 1980 platform voiced support for Roe v. Wade – the 1973 Supreme Court decision that legalized abortion – but added, “We fully recognize the religious and ethical concerns which many Americans have about abortion.”

Four years on, the platform contained no reference to abortion, and the 1988 document said (without mentioning the word abortion) “the fundamental right of reproductive choice should be guaranteed regardless of ability to pay.”

The 2016 Democrat platform, for the first time, endorsed the repeal of the Hyde Amendment.

Editor's note: This article was published by CNSNews and is reprinted with permission.