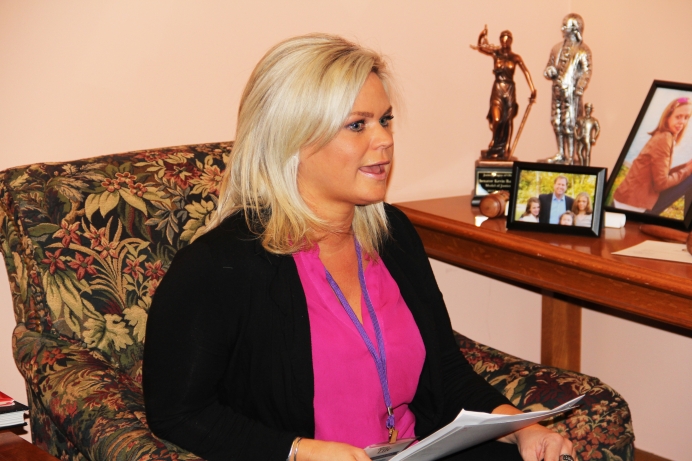 “Hands down, I’m so much better because I chose life,” Mom Tells State Lawmakers

More than 12 years ago, all Ashleigh wanted to do was hide her pregnancy. Today, you’d be hard-pressed to find a prouder mom.

The dozen years between then and now have brought on drastic changes to Ashleigh’s life, not the least of which is her desire to let others in on how motherhood has transformed her life for the better.

Telling her story to a state lawmaker’s office Wednesday as part of Ohio Right to Life’s 2017 Legislative Day in Columbus, Ashleigh held up a picture of her son, Cameron, in his basketball uniform and talked up his love of sports, reading and honor roll achievements.

Ashleigh would be the first to tell you a visit to Pregnancy Decision Health Centers—a six-location, ultrasound-equipped pregnancy help medical clinic in Central Ohio—was a major turning point in her journey to embracing motherhood.

She had already gone through one unexpected pregnancy at age 19, placing her daughter for adoption in what turned out to be an especially excruciating process. Now that she was pregnant again, all her previous pain, loss and embarrassment came back with a vengeance.

The pressure was so intense, Ashleigh initially turned to an abortion clinic for answers, even though she’d never given more than a passing thought to abortion as a way out of her first pregnancy.

“I’ve always been against abortion, but I really just wanted to hide it, because I was given so many pats on the back,” Ashleigh said. “I really felt like a failure for choosing adoption for one child and then getting pregnant again. Pregnancy is something everybody sees, and I felt like my testimony meant nothing now that I made the same mistake again.”

Tweet This: How one #prolife ctr changed this mom's life. @OhioLife @PDHC_Cares

The Hardest Thing She’s Ever Done

When Ashleigh had been pregnant as a teenager, she’d had what can only be described as a nightmare scenario, as her adoption essentially broke down while she was still in the hospital with her newborn daughter.

The father of Ashleigh’s daughter had been against placing their child for adoption all along, but she’d worked with an agency that helped her identify an adoptive family and make plans to entrust her baby into their arms.

In the hospital, however, the agency backed out of the adoption at the last minute, leaving Ashleigh on her own to figure out what she would do with her daughter—and what she’d do with her boyfriend, whose opposition to the adoption seemed to have very little to do with any sort of commitment to parent his child.

“I always told myself if I ever had to take the baby home, there’s no way I could go through with the adoption, but every day I was with her I loved her more, and it was less about me and more about what she needed, which was a mom and dad,’” Ashleigh said.

“I gave her father a chance, and he was just not stepping up to the plate. I had the phone number of her adoptive mother and I called her and said, ‘Listen, I would like to go forward with the adoption.’”

Together, Ashleigh and her daughter’s adoptive parents made arrangements for a semi-open adoption through a private attorney, and she’s kept in touch ever since. In fact, she has plans to meet up with her daughter and the family later this month.

But even though she never regretted choosing adoption, Ashleigh was largely left on her own to deal with the ache of placing her child for adoption, which she says is the hardest thing she’s ever had to do. Even today, Ashleigh struggles with the thought of explaining to her daughter why she placed her for adoption so many years ago.

Turning to drinking and a college party culture to numb the pain, by the time she found out she was pregnant again, Ashleigh had all but ruled out adoption. After her visit to the abortion clinic, however, she realized what she really needed was a voice in her life that wouldn’t stand to gain anything from her—regardless of the choice she’d make.

She found exactly that the moment she walked in the doors at Pregnancy Decision Health Centers.

“When you’re in that situation, you’re so fragile and you’re so sensitive, that when people push their ideas on you, it can really be quite a turnoff,” Ashleigh said. “When I went there, the lady there was 100 percent non-judgmental and my decision wasn’t going to make them any profit. That’s what I was looking for, someone to talk to who wasn’t going to profit off me or my baby.”

Life as a single mom hasn’t been easy for Ashleigh, who later gave birth to a third child—a daughter she’s raised alongside Cameron—but that initial interaction with a peer consultant at Pregnancy Decision Health Centers has had a lasting impact.

The staff member had recently chosen life during an unexpected pregnancy of her own, and was now in a position to not only tell, but show Ashleigh she could handle life as a single mom.

Tweet This: "I was looking for someone who wasn't going to profit from me or my baby." @PDHC_Cares #prolife

“I can say, hands down, I’m so much better off because I chose life,” Ashleigh, who works in commercial real estate, said. “Especially as a parent, you want to be a better person for your children, you want to be an example. It’s hard being a single mom, it really is. But you learn not to care what people think of you, to stand up for what you believe in and not be ashamed. I have this beautiful, amazing kid now who is a product of choosing life.”