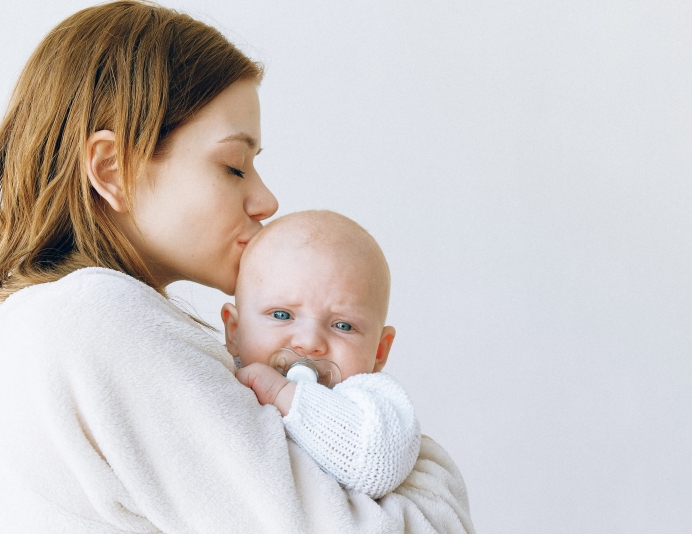 After the birth of our first son back in the day, I began to formulate some thoughts on how many kids my husband and I might have.

Four seemed like a reasonable number, since I came from a family with four kids (and so did Scott). I also definitely wanted at least one girl.

After we had our second son, my desire for a daughter grew stronger.

Then I had our third son, and my body began giving me clear signals that childbearing was taking a toll on it.

Between our first two boys, I had a miscarriage at eight weeks gestation. It was devastating.

Later, when our youngest son was three years old, I got (unexpectedly) pregnant again.

By this time, it took a while to adjust to the idea of a fourth child.

I finally started feeling excited toward the halfway mark of the pregnancy, but then we lost the baby at 20 weeks.

I wouldn’t wish a miscarriage on my worst enemy, yet those difficult experiences carved something deep in my soul.

My suffering prepared me to care deeply about pregnant women facing hardship, and for those who lose a child (either to miscarriage or abortion).

We raised three children, not four, and never had a daughter. However, I now have three daughters-in-law who are like daughters to me, and three delightful granddaughters in addition to five grandsons (so far!).

I could share many other testimonies from my own life as to how my plans didn’t work out, yet God worked out something better than I could have imagined.

And that’s just one life. You have your own stories.

Those of us in pregnancy help ministry understand God’s ways, so we can confidently assert that “unplanned” doesn’t conflate with “bad.”

Tweet This: Those of us in pregnancy help ministry understand God’s ways, so we can confidently assert that “unplanned” doesn’t conflate with “bad.”

We know that human beings are limited in our perceptions and our power. We like to think we are in charge of our lives, but we really aren’t.

We tend to worry and get anxious about the future, so we try to control it by imagining what it might look like.

But God is “… able to do immeasurably more than all we ask or imagine,” according to Ephesians 3:20.

Therefore, imagining the future is often a fruitless exercise with bleak results because we can’t possibly see what God is up to!

This is something abortion advocates fail to take into account—the sovereignty of God. Everything is kept on a human plane with the operative assumption that, if a baby gets in the way of a young woman’s plans, the answer is to eliminate the baby.

Pregnancy and childrearing may look like an insurmountable obstacle to a young woman planning on college or a career.

Yet, as those of us in pro-life ministry have seen countess times, raising a child and pursuing education or career goals are not mutually exclusive.

The Care Net pregnancy center network tweeted recently, “Our pro-abortion culture believes every unplanned pregnancy is a crisis. But pro-life people understand that some of the best opportunities for growth and improvement are unplanned.”

At your center, no doubt you can tell multiple stories of young women who chose life and were enriched by their decision.

I think of the high school senior whose mother threatened to kick her out and cut off her college money if she ever got pregnant. She bravely chose life and went to college while her mother, who became a devoted grandmother, helped care for her little girl.

I think of the 16-year-old who was considering abortion but chose life and made an adoption plan for her little boy. The adoptive parents were so supportive of this young mom that they attended her cheerleading events the following school year.

These young women, and many others I can tell you about, gained confidence and joy from their choices for life.

As for abortion claiming to be the solution to an unplanned pregnancy, I can’t help but think of one young woman who came to our center for post abortion healing.

She’d been pursuing a graduate degree when she became pregnant. Out of fear of her parents’ response, she had an abortion.

Far from solving her problem, the abortion brought her to an emotional and mental screeching halt. She dropped out of her program, unable to continue her studies.

Abortion advocates make it sound like pregnancy and motherhood derail a woman from her best plans.

I’ve seen just the opposite, many times over—it is abortion that derails women.

As you do this work, remember, you are helping women walk on a path of blessing. You are helping them embrace a brighter future than the dark “answer” of abortion can provide.

With that, remember, you don’t need to figure out your own future, either. Don’t be tempted to forecast. God is always at work doing far more than your finite mind can come up.

So, as you help women avoid getting derailed by an unplanned pregnancy, trust God with the unplanned circumstances of your life and your ministry.

He has plans which you cannot imagine—and they are good.