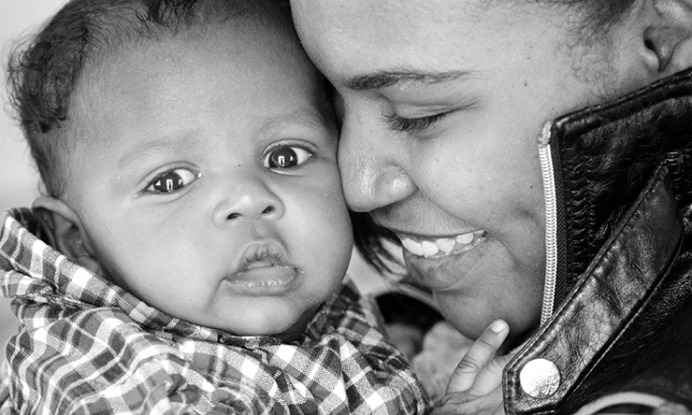 Minneapolis Women have a Friend on North Side

With a citywide crime rate ranking in the top 10 percent of the 400 largest U.S. metropolitan areas, Minneapolis has its share of rough neighborhoods, where help can be scarce and community resources can be lacking.

In one of those neighborhoods, just north of downtown and east of the Mississippi River, close to 40 percent of residents live in poverty.

A woman facing an unexpected pregnancy in this North Minneapolis may face an uphill climb. But the good news is, this same woman has a friend in the community at North Side Pregnancy Options.

Tweet This: #Minneapolis women have a friend at North Side Pregnancy Options.

“People say, ‘Where do you work?’ And I say, ‘Where was the last murder?’ But that’s where we are needed,” Executive Director Jann FritzHuspen said. “We are right in the heart of North Minneapolis, where there is the most violence and tension and homicides."

Two moms found the life-affirming friend in North Side Pregnancy Options on the same day in late December, 2014.

That was the day when “Tamika” and “Jenny” both braved the brutally cold conditions outside and found the warmth of life-affirming help inside the four walls of North Side Pregnancy Options.

Tamika, the mother of three very young—and hungry—children, had come into the center looking for money to get her family to the local food bank. An initial conversation revealed, however, that Tamika was contemplating suicide.

Tweet This: We save lives on so many fronts—not just babies and mommas from abortion.

While the center’s licensed counselor started to engage Tamika in a deeper conversation, Jenny—a teenager who’d been abandoned by her family—came in for a pregnancy test, telling center staff that a friend had referred her to North Side, since they “care for women and help them.”

Jenny would soon find that to be the case. As she sat with FritzHuspen, it became clear that Jenny’s situation was much worse than she had initially let on. Abandonment by her family had given way to abuse from her boyfriend, and it had been just three months since she underwent her first abortion.

While it’s the norm at North Side Pregnancy Options for the staff to stop and gather for prayer at mid-day, FritzHuspen, in her second year as executive director, sensed that the day’s combination of clients called for a unique response.

“By giving very specific needs to our prayer warriors, they responded,” FritzHuspen said. “We got more than we needed, and we had two people step up to the plate and say, ‘I’ll pay for rent.’”

“We had these needs that were beyond what we usually offer and can give. We took it to prayer and really had this sense that we needed to go beyond the normal scope.”

In addition to praying as a group, FritzHuspen and her staff sent out an immediate ask to the center’s prayer supporters, informing them of the specific needs facing Jenny and Tamika.

The immediate response took FritzHuspen by surprise, as two separate prayer supporters “stepped up to the plate” and offered to pay for a month each of Tamika’s rent—far exceeding the original need she presented, gas money to get to the food bank.

Jenny, who had suffered so much abuse and neglect in her young life, left with a hug, a grocery card, and an appointment at the center’s prenatal medical clinic, under the care of the University of Minnesota Certified Nurse Midwives who work with the center.

“It’s a miracle, it’s incredible,” FritzHuspen said. “I’m so thankful to God. I really think we are the first people who have cared about Jenny in probably 10 or 12 years, since her family fell apart when she was a young child.”

As part of the fund, FritzHuspen has equipped her organization’s leadership with a stocked supply of gas cards, grocery cards and the authority to put them to use.

"We used to just keep track of just abortion-minded or abortion-vulnerable women who chose life, but these are all really important,” FritzHuspen said. “People really need to see how much farther we go than just saving babies from abortion. We save lives on so many different levels.

Tweet This: We save lives on so many different levels.

“We have been saving so many lives on so many fronts—not just babies and mommas from abortion. We are trying to create order and stability in people’s lives.”