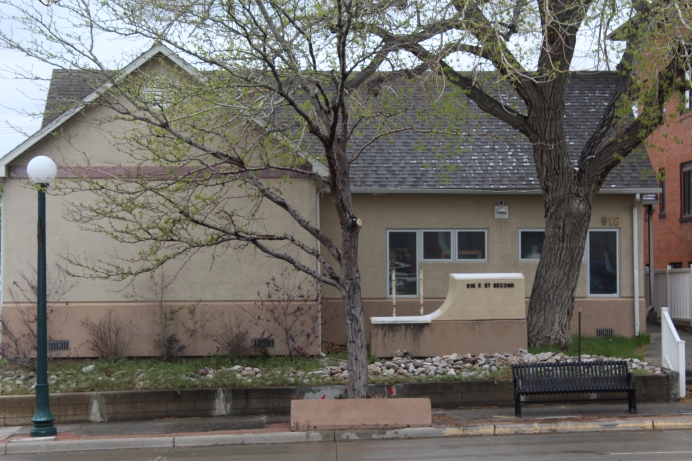 The site of a planned Casper, Wyo., abortion facility backed by out of state abortion proponents Gayle Irwin

Deeming Wyoming and surrounding states “an abortion desert,” a group incorporated in Washington, D.C. plans to open an abortion facility in Casper, Wyo., as early as mid-June.

Casper residents learned in April that a group called Circle of Hope, recently renamed Wellspring Health Access, purchased a building on Second Street, one of the main east-west artery streets in town, close to other medical services, including Banner Health’s Wyoming Medical Center.

It's not known whether a May 25 fire at the planned abortion site, still under investigation at press time, will delay the facility’s projected June opening.

With a decision imminent in the Dobbs v. Jackson Women's Health Organization case that would possibly overturn Roe v. Wade and return abortion to the states, it remains to be seen whether abortions will be conducted at the new facility, as Gov. Mark Gordon signed a trigger law banning most abortions earlier this year.

The new Wyoming law is slated to go into effect five days after Roe would be overturned, and would ban nearly all abortions in the state, including chemical, except for cases of rape, incest, or danger to the mother’s life.

Abortion proponents have issued numerous serious threats against pro-life pregnancy help centers and churches since the May 2 leak of the draft majority Dobbs opinion indicated that Roe could be overturned, and many of the targeted entities have suffered vandalism and/or violence.

The proposed Casper abortion facility’s founder Julie Burkhart, who is based in Colorado, has “a long history of reproductive rights advocacy,” Cowboy State Daily reports, including establishing and managing two abortion facilities and overseeing a third. The abortion center’s operators are still determining what services beyond abortion the Casper facility will offer, but contraception and “gender transition” procedures are among those under consideration. Burkhart is among those using the “abortion desert” term for the area, and her group is considering other areas for introducing abortion centers.

A number of pro-life Casper residents have gathered at the planned abortion facility site on Thursday evenings the past several weeks to pray. Organizer Bob Brechtel said he and as many as 150 others representing nearly 30 churches seek to peacefully and prayerfully defend human life.

“People kind of knew us from 40 Days for Life and volunteered (to pray),” he said. “We have a pro-life email list we send (notices) to, and it spread from there.”

Brechtel lived in Casper when abortions were performed there after the 1973 Roe v. Wade decision.

Tweet This: Pro-life Casper residents continue to pray in opposition to a proposed abortion facility, praying for peace and love for mothers and babies

With the Dobbs decision still up in the air Brechtel said the Thursday night prayer gatherings will continue for as long as the abortion center may be open.

“We’re going to wait and see what this facility is going to do,” said Brechtel, also a former Wyoming state legislator.

In addition to the regular 5 p.m. prayer vigil on Thursdays, Brechtel and other organizers will host a pro-life rally on Thursday, June 2, after the 5 p.m. prayer time starting at 5:30 p.m. Local pastors and priests will deliver remarks and music will also be performed.

“We pray our Christian witness may always bring peace and love for mothers and babies,” Brechtel said. “We love them both.”

In conjunction with other pro-abortion protests on Saturday, May 14, in response to the Dobbs leak, Casper abortion supporters marched along Second Street from downtown, walking from a community park, past the proposed abortion center building, and ending at another community park across the street from the hospital. Several carried signs with sayings such as “Pro-Choice is Pro-Life” and “My Body, My Choice.” Some even brought their children.

Tweet This: Out of state abortion activists think Wyoming & surrounding areas are an "abortion desert” & plan to open an abortion facility in Casper

While Americans await the Dobbs decision amid ongoing unrest the need for pregnancy help centers remains.

Regardless of the Dobbs case outcome, women will experience unplanned pregnancies. There are currently 14 pregnancy help organizations located in Wyoming, according to Heartbeat International, the nation’s largest network of pregnancy help. Those 14 life-affirming centers along with the nearly 3,000 pregnancy help centers throughout America will be there for women and their families, just as they have since before Roe.

Gayle M. Irwin is an award-winning author and freelance writer living in Wyoming. She’s been recognized by Wyoming Writers, Inc. and the Wyoming Press Association for several of her works. She’s contributed short stories to seven Chicken Soup for the Soul books as well. For nearly 13 years, Gayle worked as Patient Resources Director at True Care Women’s Resource Center, a pro-life pregnancy medical resource center in Casper, Wyoming. She will retire in December 2022 to focus on her writing career. Gayle is the author of many inspirational pet books for children and adults, including devotions such as Walking in Trust: Lessons Learned With My Blind Dog and the upcoming Seasons of Life Seasons of Nature. She considers herself a human and pet life advocate and finds creativity and connection in God’s creation. Learn more about Gayle on her website: gaylemirwin.com