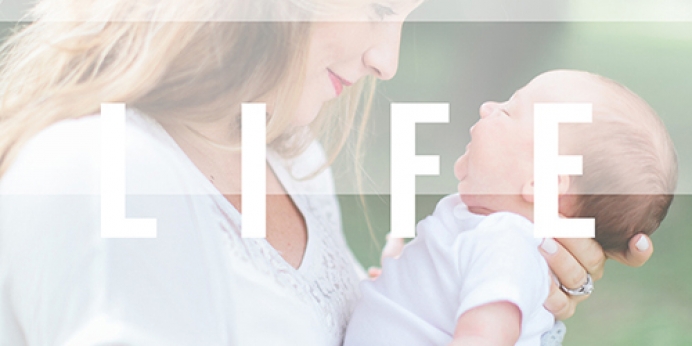 But it wasn’t until she saw the Center for Medical Progress’ videos exposing fetal tissue sales by Planned Parenthood that she discovered the true power of her lens.

Stirred by gut-wrenching emotion for the lives of the unborn and empathy for women affected by abortion, Barfield set out to make a statement and take a stand. A simple feat, she decided her response to the shocking videos would be creating a filter displaying the word LIFE in large, white letters and applying the filter to a photo of her holding her newborn son. She then posted it to her social media site. What happened next was astonishing.

Within an hour, Barfield received 100 email requests in her inbox from people who had seen her photo online and wanted to use the LIFE filter as well. Momentum built rapidly and within 24 hours, Barfield and a team of designers and photographers filtered some 2,000 images – all by hand – which people posted to their social media networks. The LIFE filter became a viral campaign and the Stand for Life movement was born.

“It began as my personal response,” Barfield, owner of Jess Barfield Photography, said.  “I felt I needed to make a personal declaration and just say in love, in hope, in kindness, I believe in life. And not in a judgmental, hateful way toward women but just a very beautiful way, which is why I made the LIFE filter.”

Barfield has been both surprised and overwhelmed by the positive social media buzz her LIFE filter has created.

“We didn’t mean for any of this to catch on and be a viral social media movement, but God had other plans and it’s been incredible,” she said.

“There’s this huge group of new people of new passion wanting to speak out for life and choosing life.”

Although Barfield has always felt a calling on her heart that “babies need somebody to speak up for them,” she admits being vocal about abortion hasn’t always been easy for her or her photographer friends who make up the Stand for Life team. The Planned Parenthood videos changed all that.

“We have been very quiet on any issue that is controversial because we’re self-employed, so it’s imperative for us to kind of keep our mouths closed about controversial issues because of that,” Barfield said.  “But once we saw the Planned Parenthood videos we decided enough was enough, and we really couldn’t afford to be quiet anymore.”

They don’t consider themselves activists, just women who want to spread a prolife message of hope, in a fresh, new way that will awaken and stir their generation to take the same stand.

Consequently, the LIFE filter has given them an opportunity to help women and families tell their stories, Barfield said.

“It started as just a photo filter and then it evolved into a storytelling platform,” she said. “All these women and families have never had a chance to be able to share their stories of, ‘20 years ago, I had an abortion and I’ve found so much healing after,’ and now they’re helping other women choose life.”

A lot has happened in a short period of time for Stand for Life, which launched just a little over a month ago. Since then, 40,000 LIFE filter images have been made and shared through social media, and the Stand For Life Facebook page has amassed more than 10,000 followers.

Barfield said one of Stand for Life’s major goals is to use the movement’s newfound influence to reach and serve women and families by partnering with pregnancy help centers to help promote awareness about their services, share impactful client stories and bring in committed volunteers.

“We see ourselves as the connecting point between this new energy and people helping.”

Thrive Executive Director Mary Jayne Fogerty said partnering with Stand for Life has expanded their reach to more social media-minded millennials and given their ministry increased visibility to women in need of their resources.

In addition, Stand for Life led a successful fundraising campaign for Thrive and used its social media power by sharing Thrive client Asha's story with Stand for Life’s thousands of followers.

“They posted Asha’s story and shared about our ministry and they did a fundraiser for us with #standforlife shirts,” Fogerty, who has led the 32-year-old pregnancy help ministry for the past 11 years, said. “I love that they’re getting our name out there [along with] where they can send people when they’re in unexpected pregnancies.”

Fogerty said Stand for Life is bringing a much-needed vibrant youthful approach to spreading pregnancy help center awareness, a feat that will undoubtedly advance the work and accelerate outreach efforts.

“What I love about [Stand for Life] is it had sprung up grassroots by young people who can no longer just say they’re prolife and do nothing about it,” Fogerty said. “I think what they’re doing only elevates our movement, the overall pregnancy clinic ministry movement.”

“Together, we can have a big impact.”

To find out more about Stand for Life, visit StandForLifeMovement.com or email This email address is being protected from spambots. You need JavaScript enabled to view it..