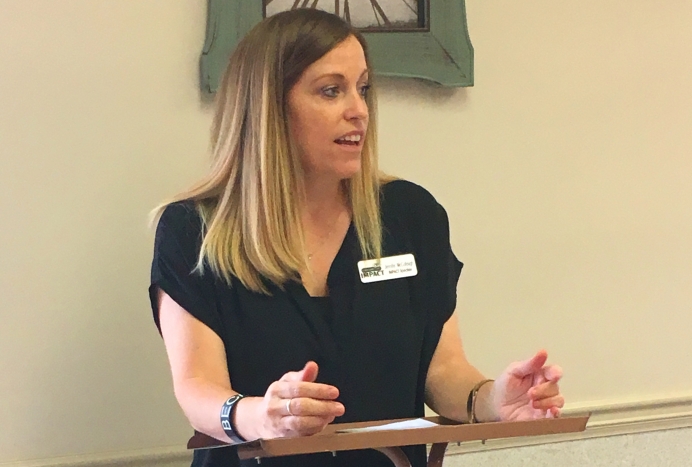 Jennifer McCullough is in the cross-hairs of a Planned Parenthood partner looking to get into Georgia schools. Photo Courtesy: PRC of Gwinnett

Twenty-one years ago, Jennifer McCullough was a high school student facing an unexpected pregnancy who turned to the Pregnancy Resource Center of Gwinnett (Ga.), for help.

That experience with the center made such a profound effect on McCullough’s life that, three years ago, she started volunteering with the organization’s abstinence-centered IMPACT sex and relationship education program.

McCullough, who took over as the program’s director March 15 of this year, now finds herself at the center of a maelstrom, following allegations from two women who are working together to oust IMPACT and replace it with a contraception-heavy program started by feminist icon Jane Fonda and partnered with Planned Parenthood.

At the center of the controversy are allegations from the two parents that McCullough blamed victims of rape and sexual violence, while shaming sexually active students at a recent high school presentation.

McCullough, herself a rape victim and former teenage mom, said those allegations couldn’t be further from the truth.

“Being a rape victim, I was very hurt and appalled at the fact that anyone would ever accuse me of saying that,” McCullough said. “It’s really disappointing, not only personally but as a presenter. I’m here to invest in this generation. I’m here to pour into your child and other people’s children.

“Here I am, as a mom, just wanting to make a difference and empower these kids, and my comments are taken out of context and just twisted around. It was just very hurtful.”

Who Am I to Shame Someone?

The allegations come after one woman’s 14-year-old daughter attended a two-day session of McCullough’s “Choosing the Best” presentation in early June. Both the student and her mother then claimed McCullough’s presentation was insensitive to victims of sexual abuse, as well as sexually active and LGBTQ teens.

Leading up to a school board meeting June 15, the mother took to Facebook, requesting damning comments from former students on the program—which a school board committee reviews on an annual basis.

In her written testimony, the mother claimed she was “horrified” when her daughter told her about McCullough’s presentation, asserting that sexual abuse victims in particular were harmed and shamed through what McCullough had said.

As a victim of rape and former teen mother herself, McCullough said she was shocked that her presentation could be understood as a shaming mechanism.

“I would never say, ‘This is what you’re like after you have sex, no one wants you.’ I would never say that to anyone,” McCullough, who has also started her own nonprofit, “Girls Like Us,” that focuses in part on sexual assault victims, said. “That breaks my heart to think that someone would misconstrue that so much and get that out of the lesson. That tells me they were either not paying attention or they were picking and choosing what they wanted to hear.

“That’s where I’m really hurt, because I shared my story and where I’ve walked in my past as a young girl. With the choices I made, who am I to shame someone?”

After first hearing about the accusations, McCullough said she racked her brain trying to understand how one of her students could so dramatically misunderstand her presentation.

A clue into the underlying motivations came over Father’s Day weekend, however, thanks to a message posted on Facebook. In the message, another community mother who had lodged a similar complaint at the school board meeting posted that she and the other mother had already scheduled a meeting with the Georgia Campaign for Adolescent Power and Potential (GCAPP) for June 30.

Launched by Fonda in 1995, GCAPP partners with several Planned Parenthood affiliates throughout the state.

In her post, the woman bragged that when she mentioned to the GCAPP representative that “the PRC had to go, his exact words were, ‘That will not be a problem at all.’”

The woman’s post ended with the celebratory words: “We’re on the way to changing the way Sex ed is taught in Gwinnett – for good!!!”

Though that change would be good news for the GCAPP, the effort to get PRC of Gwinnett out of the schools has only aroused a fringe group of parents and former students in the county.

Since 2002, PRC of Gwinnett’s IMPACT program has reached 130,000 students at six area public high schools. Parents like Melissa Dunn, who volunteers with PRC Gwinnett, said the program has been a helpful tool for her high school son.

Though critics of abstinence-centered relationship education have long accused the approach as ineffective and outdated, a study released earlier this month in the Journal of Health Economics tells a different story.

As reported June 12 by Michael New at National Review, the study analyzed a dramatic fall in teen pregnancy rates in Great Britain that starting in 2008, finding, “Large cuts in contraception and sex-education programs were correlated with larger reductions in teens’ abortion and pregnancy rates.”

In other words, when teens are helped to think through the consequences of their choices rather than relying on contraception, better decision-making is the result.

Tweet This: When teens think through consequences, they make better choices. @Michael_J_New

“No matter their situation, no matter their circumstance, you can overcome the difficulties and obstacles in your life to become the person that you want to be,” McCullough said. “To me, the whole intention is more than sexual health education, it’s the opportunity to pour into these kids’ lives and help empower them.

“They need to understand that their lives matter and their lives have purpose. Every choice they make is going to have an effect on them. The choices they make in their everyday lives are going to affect them in the future.”