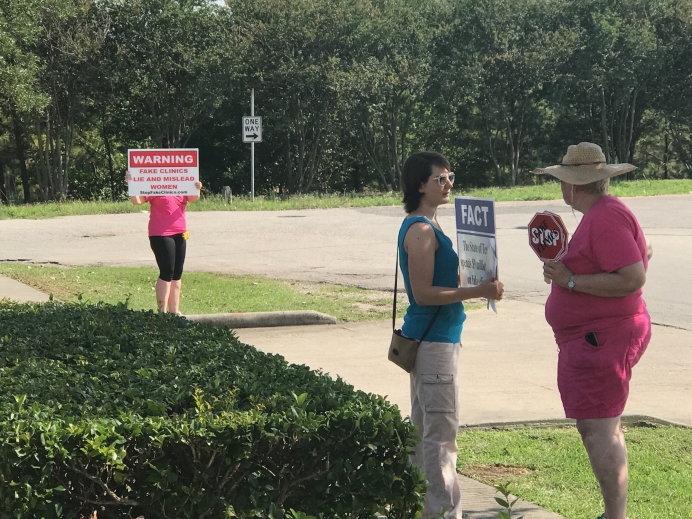 When a pro-life advocate stands outside an abortion business, the primary aim is to offer a woman walking into the clinic one last chance to reject abortion and choose life for her baby, often with the help of a local pregnancy help organization.

But what about when the reverse happens? What about when a “pro-choice” advocate stations herself in front of a pregnancy help medical clinic? What’s the last-minute choice she’s hoping that woman will make?

You guessed it: abortion.

That was the case June 9, when a group of four abortion supporters positioned themselves in front of Houston’s Fifth Ward Pregnancy Help Center, which serves 350 women every month in one of the poorest communities in the U.S.

Wielding signs that urged women to flee from the pregnancy center—one read, “Stop: Religious Zealots Preying on Women,” while another touted the thoroughly debunked nonsense that abortion is safer than childbirth—the middle-aged white protesters stuck out like a sore thumb in a predominately black area that was home to two-time heavyweight boxing champion George Foreman.

The pregnancy center is one of two locations—plus a mobile ultrasound unit—overseen by Sylvia Johnson-Matthews, who opened Fifth Ward Pregnancy Help Center just after an abortion clinic opened up shop in the neighborhood back in 2004.

While that abortion clinic is out of business, Planned Parenthood opened its largest mega-center just three miles down the road in 2010, directly in the middle of Houston’s Third and Fifth Wards.

“I don’t know if it’s the previous election or what, but something has ignited these women to boldly come into an urban hood and stand with signs to tell women that abortion is safer than childbirth,” Johnson-Matthews said. “It’s a sad thing that my community has bought into those lies.”

Darryl Polite, a volunteer at the center, went out to encourage the woman’s boyfriend to come inside and ignore the protesters. On an earlier trip outside, Polite had brought out cold water on a typically humid summer afternoon.

“They want you to go out there and debate, argue, scream and yell,” Polite said. “That way, anybody who may think of coming in is just going to see that and go past. If they stand out there by themselves and nobody’s out there talking to them or anything, then they’ll be ignored and leave. And that’s what happened.”

While they’ve encountered protesters before at their downtown location, Johnson-Matthews said she thinks the timing of the recent opposition is part of a political climate that’s heating up as Texas legislators advance an effort to permanently defund Planned Parenthood.

Between the two locations and the mobile ultrasound unit, Johnson-Matthews’ organization is rescuing as many as six unborn children every day. Not only that, the outreach helps mothers who do choose life get started on the right foot as new parents while following through on career and educational goals.

“The whole experience just made me realize how much hate that’s out there for children, for these babies who have no voice,” Daisy Garcia, who runs the Fifth Ward location, said. “If anything, it motivated me to just move forward, be more compassionate and do what we do for the Lord.

“We’re moving forward in a positive light and we know we’re doing the right thing.”