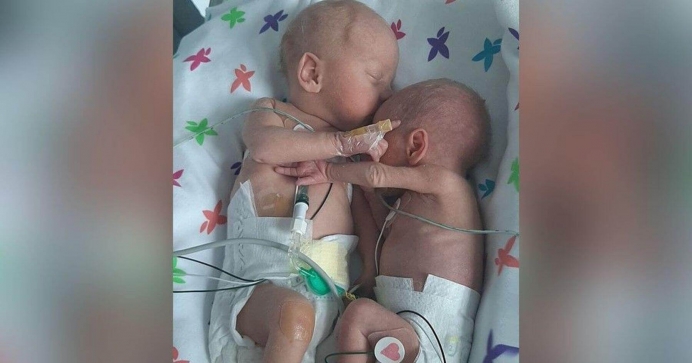 (Right to Life UK) Twins born prematurely have been reunited for the first time after being separated at birth.

The twins, Neve and Louie were born prematurely at 30 weeks’ gestation. Neve weighed just 1lb 7oz (652g) when she was born and it was thought that she might not survive. However, it was her brother who, although over double her weight at 3lbs 3oz (1.5kg), had to be separated for specialist medical care.

They were born to Laura Hough, 27, from Liverpool who said the birth was “scary” because she was “told for the last few weeks of [her] pregnancy [Neve] might not make it but she was fine”.

Neve had problems with her blood flow and was not getting enough nutrients but despite being “so tiny” she did not need oxygen.

“She’s incredible. The doctors said they had never seen a baby so small not need any help”, she said.

Louie had to be cared for in a different unit in the hospital after he had various difficulties and his lungs collapsed.

After treatment and time to heal and grow, however, the twins were reunited on 23rd March after being separated for almost three weeks.

Miss Hough said their reunion was “so cute, they were cuddling and even holding hands”.

“They’re unbelievable. They’re so strong. I couldn’t be more proud”, she said.

“It was horrible when they were separated at birth but I cried tears of joy when they got back together”.

“They were wrapping their legs around each other and cuddling, even holding hands at one point. They were so cute”.

Doctors hope that the twins will be able to go home by May.

Babies born before and shortly after the abortion limit

Babies like Louie and Neve, although born at 30 weeks, could have been aborted if either of them were disabled. Babies are continuing to be born before or shortly after the abortion limit of 24 weeks’ gestation in Great Britain and going on to live and even thrive at greater rates than before. Studies suggest that the majority of premature babies grow up to be healthy adults without any major health problems.

A study, published in the Journal of the American Medical Association in October 2019, followed 2.56 million babies born in Sweden between 1973 and 1997, around six percent of whom were born prematurely.

Additionally, with each passing decade, the odds of survival for a premature baby to adulthood have improved from about 91% of babies born in the 1970s to about 96% of those born in the 1990s.

However, the study also found that the earlier babies are born, the harder it becomes to avoid complications.

Just 22% of extremely premature babies – those born between 22 to 27 weeks’ gestation – were alive without any health problems by the end of the study.

The survival rate for extremely premature babies has doubled over the past decade, prompting new guidance allowing doctors to try to save babies born as early as 22 weeks into a pregnancy.

Tweet This: Studies suggest that the majority of premature babies grow up to be healthy adults without any major health problems.

Right To Life UK spokesperson Catherine Robinson said: “The heartwarming story of the reunion of these twins reminds us that inside or outside the womb, life is precious.  Thankfully, even though they were born prematurely, they have gone on to survive. However, other babies in the womb at the same gestation can have their lives ended by abortion if they are disabled”.

“The survival rate for babies born prematurely is improving all the time, and the inconsistency at the heart of our abortion law is becoming clear for all to see”.