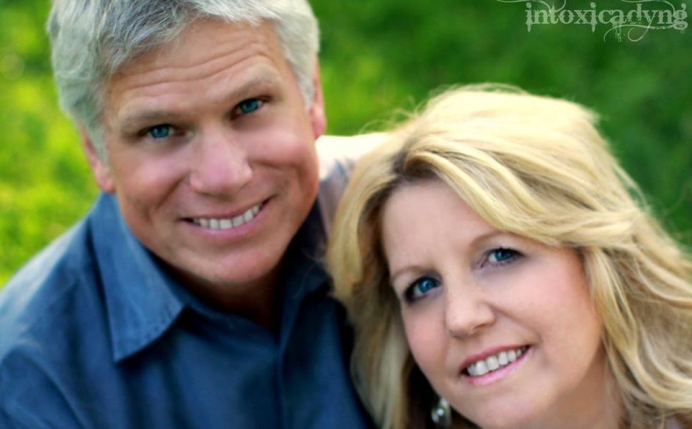 Diedre Eckle, 56, with her husband of 35 years, John. Diedre was killed in a motorcycle accident Aug. 3

Diedre Eckle, a long-time leader of three pregnancy help medical clinics in Northern California, was killed in a motorcycle accident Aug. 3, according to a news report Saturday.

Eckle, 56, had served as executive director at Alpha Pregnancy Clinics of Northern California since 2008, overseeing the organization’s transition to a state-licensed medical provider and the launch of a mobile ultrasound unit.

She leaves behind her husband of 35 years, John, and three daughters.

“She was a strong warrior for the unborn, a compassionate mentor for women and children, and had a heart full of love for Christ,” Crystal Rico, a volunteer at Alpha wrote Sunday on Facebook. “The loss of this amazing leader has sent a shock through us all, but we will continue to carry her legacy on through the important work of advocating for the unborn and helping those in a pregnancy crisis find strength, courage, and love.

“Diedre you will always be missed, but you have certainly left your mark on this world. Rest in Peace, beautiful soul.” 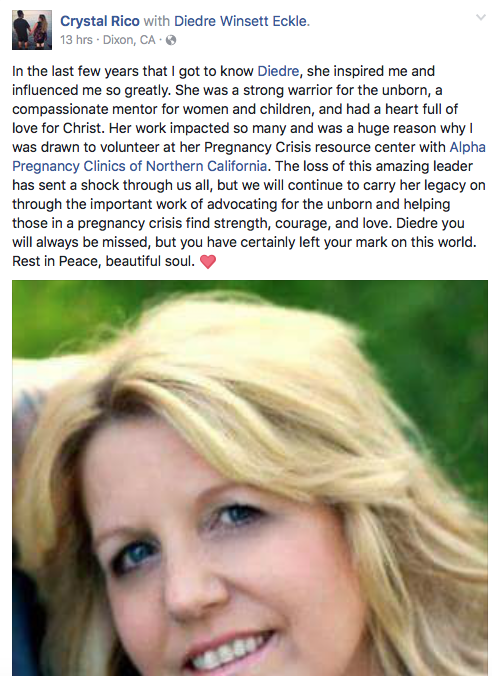 Eckle, a graduate of Biola University in La Mirada, Calif., began volunteering with Alpha Pregnancy Clinics as a peer consultant in the early 2000s. She eventually joined Alpha’s staff and board of directors before taking over as executive director in 2008.

Based in Vacaville—located halfway between Sacramento and San Francisco—Alpha also serves women and families at its Napa and Fairfield locations, as well as a mobile ultrasound clinic that was introduced under Eckle’s leadership.

Tweet This: #Prolife "warrior for the unborn" Diedre Eckle killed in motorcycle accident.

Alpha Pregnancy Clinics is also in the midst of a three-year legal battle after a building owner refused to honor a signed lease that would have positioned the life-affirming pregnancy medical clinic across the hall from Planned Parenthood.

While the Planned Parenthood location was one of several shut down earlier this summer, the pregnancy center—represented by Pacific Justice Institute—is seeking restitution after a string of emails revealed the abortion giant had pressured the building owner to cancel his deal with Alpha Pregnancy Clinics.

“We have all intentions of continuing Alpha’s mission,” Williams said. “It’s our way to honor her, to continue what she was passionate about and committed to.”