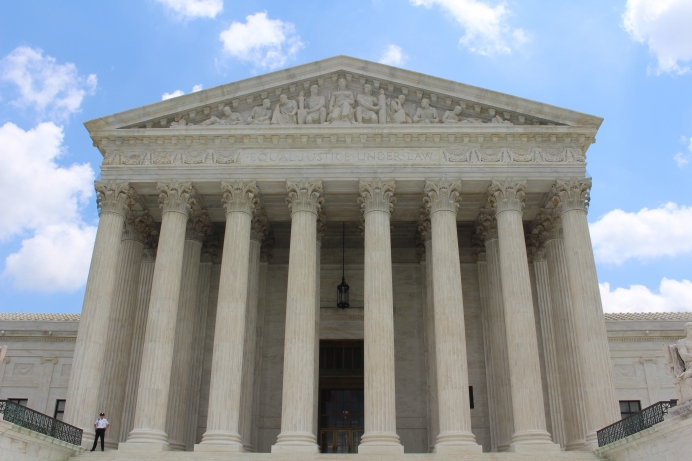 It’s rare that I write about politics on this site—quite rare. But last week, it seemed like the right time to mention the upcoming election and answer “pro-life” political pundits who sit in their ivory towers and pontificate, “I’m pro-life, but (I’m voting for the abortion lobby’s candidate).”

I’m not a big fan of those who—because of their dislike of President Trump—are willing to either sit out this election or vote for a candidate who advocates for federal funding of abortion at any stage of pregnancy, for any reason.

The column focused on one Supreme Court justice—President Trump’s first appointment to the court, Neil Gorsuch—and how his one vote in NIFLA v Becerra protected pregnancy help centers across this country.

On the Supreme Court, one vote matters. Without Gorsuch’s vote in the 5-4 decision, hundreds of pregnancy help centers across the United States would be at risk today.

I didn’t intend for the column, which appeared on Thursday, to be prescient or prophetic. But on Friday, Justice Ruth Bader Ginsburg—a reliable vote for those who advocate for abortion—passed away.

For the record, I’m in no way thankful that Justice Ginsburg is no longer with us. I respected her dogged determination to beat cancer. She persevered through many trials. She was also a close friend of the late Justice Antonin Scalia, the conservative stalwart Justice Gorsuch replaced on the bench. This tells me she could be friends with “the other side,” which is always a plus in my book.

But I won’t overlook her judicial views, either. She fought for abortion without exception, even when it meant suppressing free speech of pregnancy help centers with her vote in the NIFLA case.

Justice Ginsburg’s voting record, however, is no longer the issue. Her replacement is. The battle lines are drawn. If we think the abortion lobby will go “easier” on this coming nominee than they did Justice Kavanaugh, we would be wrong.

Should a challenge of Roe reach the Court, one might surmise that Justices Alito and Thomas would be the most likely votes to overturn. Who would be the other three to claim a 5-4 majority and strike down Roe? In order of “most likely to overturn,” a guess might be Gorsuch as possible, Kavanaugh as a “maybe” and Roberts—who upheld President Obama’s “Obamacare” initiative—as least likely.

At best then, we have a 4-4 tie with the next justice providing a swing vote.

Will the next Supreme Court justice tip the scales in favor of life? I have no idea.

My hope is to see a strict constitutionalist appointed and confirmed, certainly. Because honest scholars on both sides of the debate admit Roe has no true constitutional basis, a justice focusing on what the Constitution actually says would, in good conscience, vote to overturn. Decisions on this issue would then be left to the states.

But regardless of what happens with the 1973 decision to legalize abortion in all 50 states, pregnancy help organizations need a justice who believes we have the right to speak freely without states forcing us to refer clients to abortion centers.

Tweet This: Pregnancy help orgs need a justice who believes we have the right to speak freely w/out forcing us to refer clients to abortion centers

In NIFLA, four justices—all appointed by Democrat presidents—voted to deny us this simple right, a right guaranteed by our Constitution.

Yes, this next justice is important to all of us who love those who come in our door enough to offer them life-affirming opportunities.

However, with all the political wrangling, the “hot takes” by pundits and the hours of analysis on this next appointment, another thought breaks through all the rhetoric and pierces me: Tomorrow, women from all walks of life will enter pregnancy help centers, clinics and maternity home.

I doubt one of these women will be thinking about the next appointment to the Supreme Court. I doubt any will be considering whether a justice is a “strict constructionist” or views the Constitution as a “living document” needing judicial revision.

While the political world impacts our mission—my column of last week reflects this—it does not, in any way, change our mission or our focus.

Our focus was, is, and always will be, toward those who need us.

Honestly, this separates us from those who oppose our work. For them, every Supreme Court appointment and every election is an event worth protesting, even rioting. They spend millions of dollars on TV and online ads full of false (and dire) predictions and character assassination.

Our approach? Listen to those who need us. Help them. Love them. Provide for their needs. Honestly, while we need to be involved in the public square, our primary calling is always people. That’s a good thing.

My predictions on this Supreme Court vacancy and the coming election? I have some thoughts, but no solid answers.

But, when the dust on all of this settles—and eventually, it will—I can be sure of one thing. All of us, with steeled determination, will get up and go to where hurting people need us. We will roll up our sleeves and serve each of them with our whole hearts. We will do so regardless of who is in the White House, and regardless of who sits on the Court. This I know. And this will not change.

Thank God for that.