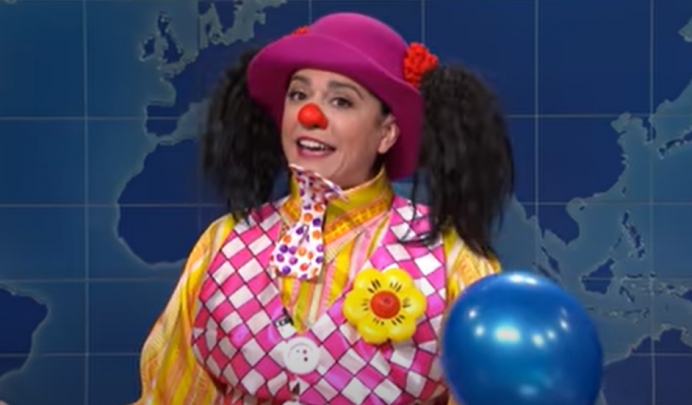 Put aside the glowing reviews in the media for Saturday Night Live’s Oct. 30 skit featuring a clown talking about her abortion.

Put aside the factual misinformation “Goober” the clown imparted, particularly the false and discredited statistic that 1 in 3 clowns (women) will have an abortion in her lifetime.

Put aside that it is just plain grotesque to ask people to “laugh so hard” about abortion.

Put all that aside and concentrate on the two accidental truths Cecily Strong revealed about abortion in her four-minute segment.

On the day of her abortion, she said, the abortionist joked that she must have gotten pregnant on her way to the abortion business because she wasn’t very far along. Abortionists occupy the bottom rung of medical society so it’s not that surprising one would make a joke with a young woman about the conception of the baby who was about to be killed. That’s the first thing she revealed about abortion.

Tweet This: Abortionists occupy the bottom rung of medical society so it’s not that surprising that one would joke about the baby about to be killed.

Women in the Silent No More Awareness Campaign have been speaking publicly about their abortions since 2003. Many of them share stories about the inappropriate comments – and worse – that abortionists made while an innocent child was being killed.

“When I arrived at the clinic, it was run down and dirty. The clinic workers were cold and impersonal, leaving me in a room alone for nearly an hour, sweating and confused, without any prior explanation that this is what would occur. When they performed an ultrasound, I asked if I could see my baby. They said no and told me that it would just upset me. The doctor was rude and aggressive, and barely spoke to me,” Chelsea said in her testimony at the 2020 March for Life in D.C.

“The Planned Parenthood was cold. Women were crying, and no one seemed to care. The doctor did not help me, and I felt uninformed by the people in clinic. I felt alone and humiliated, and they wouldn't let me see the ultrasound.”

Here’s what Phyllis recalls from that day:

“I never saw the abortion doctor until just before the procedure. I was reluctant to let him go in with the instruments. He said, jokingly, ‘Just spread your legs like a cheerleader.’ I did not laugh. The nurse who promised she would hold my hand was very warm and kind until they turned on the suction. Then her hand went limp, like she did not want to touch me.”

Other women have told about being held down, yelled at, even slapped. Perhaps the most macabre thing an abortionist has ever done to a woman having an abortion happened in 2003, when abortionist Charles Rossman gave abortion pills to a woman beyond 30 weeks’ pregnant, then locked her in his Valdosta, Georgia, clinic and went on the lam. An 11-year chase that covered two continents was finally brought to a close when Interpol caught Rossman in Germany and extradited him to the United States. He got a total of five years in prison.

His patient, on the other hand, was giving birth when police arrived at the abortion mill to free her. Goober the clown got off easy if her abortionist only made an inappropriate comment.

The other truth Goober let slip about abortion is that a woman who chooses to end the life of her child never forgets that day. Ms. Strong said repeatedly that the abortion was “the day before my 22nd birthday.”

She clearly remembers that day, and if she’s like the women from Silent No More, certain details also are indelible in her mind. The sound of the vacuum that would suck her child from her womb; the sight of the other women who had also had abortions, all of them crying; a feeling of emptiness. Every birthday for the rest of her life will be preceded by the anniversary of the day she hired a hitman to kill her own flesh and blood.

Tweet This: A woman who chooses to end the life of her child never forgets that day.

Still, she insists she’s “grateful” she was able to have an abortion because “I wouldn’t be a clown on TV” had she given birth to her child. Of course, she could not know that. Having a baby is no longer a death sentence for careers or school or whatever other plans a young woman might have.

It is a death sentence for the baby so Ms. Strong’s son or daughter won’t become a clown on TV, or a writer, or anything else. Abortion robbed that baby of all his or her potential. Abortion stilled that child’s beating heart.

No matter how much “fun clown stuff” surrounds the story of Cecily Strong’s abortion, it is still a tragedy.

Editor's note: Janet Morana is the executive director
of Priests for Life and the co-founder of
the Silent No More Awareness Campaign.
She is the author of Recall Abortion and
Shockwaves: Abortion’s Wider Circle of Victims.