Women are changed by chemical abortion – Their voices must be heard

The distressing findings of a new study on how chemical abortion affects women personally have shown that women are changed by the experience, often in a devastating way.

The voices of the women in this situation are often silenced either by shame or the idea forged by abortion supporters that aborting a child at home should occur without difficulty. And pro-life advocates must fully comprehend what these women facing to be best able to help them through their pain and loss.

Titled, “#AbortionChangesYou: A Case Study to Understand the Communicative Tensions in Women’s Medication Abortion Narratives,” the study was authored by Dr. Katherine A. Rafferty, of Iowa State University, and Tessa Longbons, from the Charlotte Lozier Institute.

Women in the study were able to able to share their personal experiences with chemical abortion anonymously in their own words via a blog on the Abortion Changes You website.

Along with heartbreaking accounts of the chemical abortion experience, among the study findings were that an overwhelming 83% of the women reported that their medication abortion changed them, 77% stated they regretted their abortion decision, and 38% reported issues with anxiety, depression, drug abuse and suicidal thoughts.

The findings were also reviewed in a recent "Research Reveals" webinar, hosted by Michaelene Fredenburg of Life Perspectives (LP), which trains pastors, counselors, pregnancy center staff and others who minister to those experiencing grief due to reproductive loss.

LP manages the Abortion Changes You website through which the women’s accounts in the study were collected. Collection of the personal stories is ongoing.

Fredenburg welcomed Rafferty for the "Research Reveals" discussion of her study on how medication abortions impact women.

Between triggering events (such as due date, anniversary of abortion, etc.) and emotional pain, these women who have undergone chemical abortion carry a burden of shame and embarrassment. The report showed that 60% had feelings of isolation and alienation.

Carolyn Klair is PDHC’s pregnancy loss program manager and she recommends to clients who need to process abortion grief that they utilize the #abortionchangesyou website offered by Living Perspectives.

“Writing their own stories, reading other's stories and participating in the Healing Pathway Exercises on this website is beneficial in their journey,” stated Klair.

In analyzing the Abortion Changes You blogs, Rafferty, formerly a health communication specialist with the Centers for disease Control (CDC), said they revealed that women are, “More muted with moving the abortion into homes through medication abortions.”

“Had I known how badly I would feel now, I would have kept the baby, even if I had to go through it alone,” stated a blogger from the case study.

Another reflected, “As a mom I feel like a monster and I have to act like nothing happened.”

The study states that it is critical to transcend the silence. Efforts by groups attempting to dispel the stigma and silence of abortion have largely been politically motivated and fallen short in providing comfort.

How can any of us recover from the pain of regret related to our own choice without facing the reality that what we did was wrong?

Yet this would be the message from pro-abortion groups—that there is nothing that needs to be dealt with or faced. Those who are going to provide hope and healing must speak truthfully.

Knowing what I know now, I would not have the abortion

While the study's authors see pro-life and pro-choice groups as polarizing and neither willing to fully listen or engage with the other, I would propose only one side offers redemption for the 77% of women who regret their decision and another 38% who report struggling with mental illness and suicidal thoughts.

“Knowing what I know now at almost a year later I would not have the abortion,” said one of the women. “That was my child and I should have done what I needed to do to give them a great life. I thought I had no options, but I did. I should have put my child first. No matter how early the abortion is it’s still a growing life and I wish I had done things differently.”

From my personal experience having been a PDHC client consultant, we frequently ministered to women with past abortions.

What I noted was how it seemed to take five or more years for them to seek help with the real source of their pain—the abortion decision.

Until then, they had wasted years changing jobs, relationships, blaming others for totally unrelated issues as it was simply too painful to look honestly at what they had done.

“At first it all seemed like a weight had been lifted and everything was okay,” wrote another one of the bloggers from the case study, “then I started to feel really sad and low, and now all I do is think about how many weeks pregnant I would have been and what my baby would look like and I miss so much.”

Perhaps having had the opportunity to blog about this anonymously will bring about healing sooner for these women.

The need to understand women

What I do know is pro-life ministries need to understand clients as best as possible in order to love them and validate their feelings. This will serve to help us establish and improve our standard of care for these clients.

Klair stated, “We are working with women who regret and who said they were unaware of the pain, trauma and grief they would experience after their medication abortions.”

“Our experience is that these women are calling for abortion recovery services immediately following or sometimes even during the process of their medication abortion when they realize that this simple solution to their ‘problem’ isn't so simple. They are terrified of the heavy bleeding, nausea and other side effects that they are experiencing.”

In the webinar Rafferty summarized the study findings with four areas of tension or contradiction which effect how abortion ultimately changes a woman: The initial decision is the tension between seeing abortion as her only choice versus other alternatives.

Secondly, is the actual medication abortion process itself, depending on information given to her. If she feels unprepared it results in believing she was misled or lied to.

Third is thoughts after the abortion which form her thoughts on identity. Initially there is relief, followed by regret experienced in later reflection and as various triggers are encountered.

Finally, is how she manages the stigmatizing, with either silence or openness. Who she is willing to talk to about the abortion and their responses to it will determine how she processes the abortion.

Abortion changes a woman on the inside, it is not some sort of rite of passage as abortion advocates would have us believe

According to Rafferty, pro-abortion groups have utilized what they refer to as a restitution narrative.

This fails to acknowledge the long-term repercussions of having an abortion. A woman does not move on unscathed as this would imply. It changes her on the inside, it is not some sort of rite of passage as abortion advocates would have us believe.

Tweet This: A woman does not move on from abortion unscathed. It changes her on the inside, it is not some sort of rite of passage.

At PDHC clients are offered confidential support for those who have experienced medication abortion or an abortion of any type.

Klair stated, “During the COVID-19 pandemic, women have shared that they were fearful for their unborn children and themselves and felt pressured by the father, friends, and their families to have an abortion. Because they feared the unknown of the pandemic and lacked support, the women who called or texted us, went against their own personal beliefs about having an abortion.”

“One woman expressed that she wanted to have the medication abortion before it was too late because she didn't think the experience would be as bad as a surgical abortion,” she said. “She believed that abortion was a good option for her at the time and it was the best decision but as she experienced the pain and bleeding and saw what she saw, trauma and regret quickly followed.” 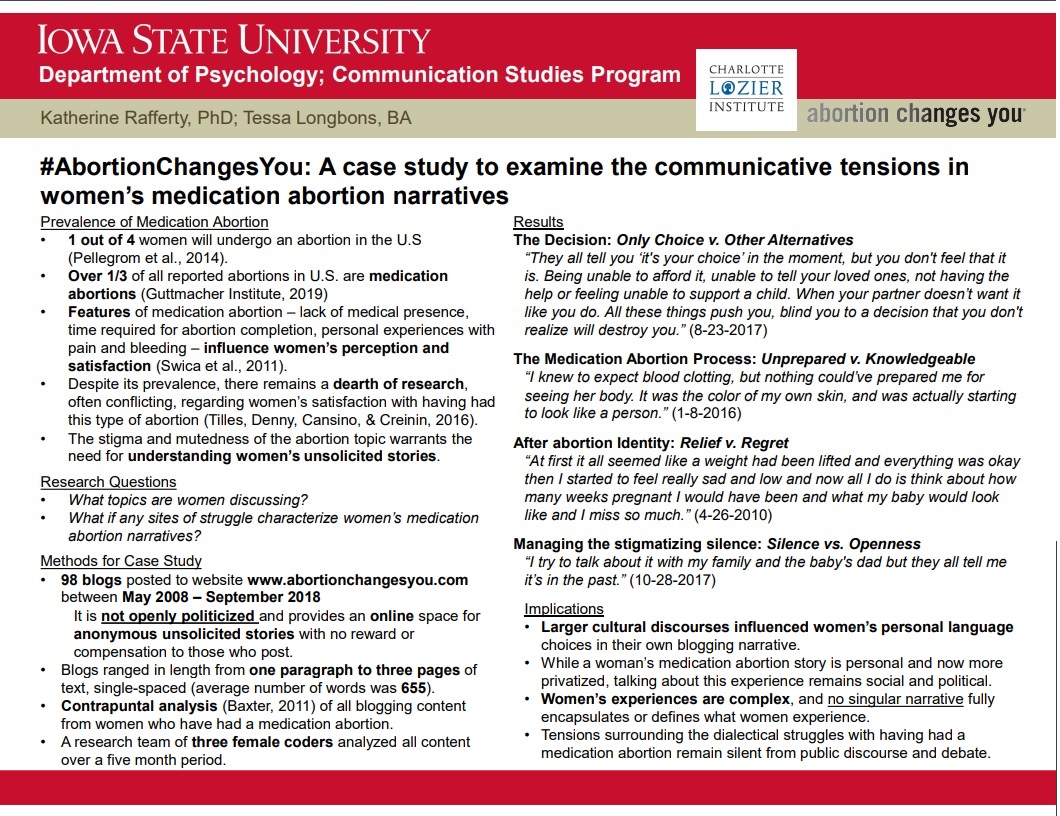 From the webinar, “Shame prevents women from getting help after their abortion. Communication is key to getting help. They need to be able to be honest with those who could offer treatment and help,” Rafferty said.

“Providers (medical, counseling or pregnancy help consultants) need to be mindful of language choices which will effect a client’s openness. Fostering environments where women feel comfortable and that you are really listening is key,” Rafferty added.

In closing comments Rafferty offered, “Let them provide their own honest expression. Comments can be filled with judgment. For example, ‘Are you sure you want another kid?’ Just listen without offering advice.”

“Women choose medication abortion often because they believe it gives them more control in the process,” stated Rafferty, “which actually is not true.”

The pro-life community must continue to offer the truth in an environment where women can untangle their feelings and find validation. The truth speaks life and we need to trust God in the process of allowing the Holy Spirit to work in the hearts of those we so desire to reach.

Editor’s note: Heartbeat International manages the Abortion Pill Rescue Network and Pregnancy Help News. Assistance and support is available through Option Line 24/7, 365 days a year at 800-712-4357, by texting “HELPLINE” to 313131, and by visiting OptionLine.org. For post-abortion recovery resources and support click HERE.