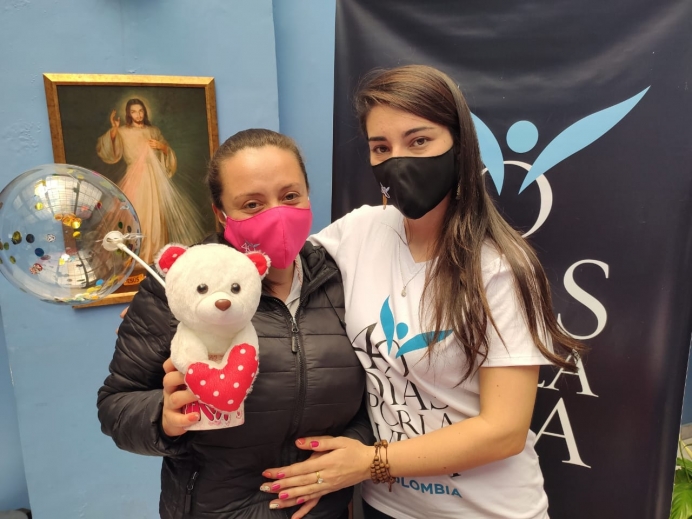 Rosa* had a dream. In her dream she saw Jesus and He told her, “You have two months.”

The 35-year-old Bogotá, Colombia, resident was shocked by her dream. Rosa pondered it over and over, wondering what it could mean.

What was as strange to her as the dream was that Rosa noticed she had continued pregnancy symptoms – strange, because she had gone to one of the abortion facilities in her neighborhood and had an abortion.

The week after Rosa’s abortion, the local 40 Days for Life group had begun its vigils in her neighborhood of Teusaquillo, which has more than 30 abortion centers. The group prays for the 40-day pro-life vigil in front of two of the largest abortion centers.

Since she was still having pregnancy symptoms, Rosa returned to the abortion clinic. Personnel there examined her and determined she was still pregnant. Understanding that her baby was still alive, Rosa was shaken by the staff’s request to perform a second abortion.

She felt so much confusion and fear. The abortion staff’s pressing Rosa to have another abortion procedure only added to her anxiety. They certainly were not answering her many questions of how she could still be carrying a baby after undergoing an abortion.

Once more they pressed and Rosa said, “No! Let me go for a walk to think about this.”

It was then she encountered a volunteer from 40 Days for Life. A conversation was begun, and the volunteer asked, “What do you need? Are you okay?”

40 Days for Life is an internationally coordinated 40-day campaign that aims to end abortion locally through prayer and fasting, community outreach, and a peaceful all-day vigil in front of abortion businesses.

Rosa started crying. She told him about her situation. The abortion, the dream, the baby who was still in her womb, and all her confusion came spilling out.

The conversation continued for two hours. They prayed together. Rosa found clarity in that moment. All it took was someone to listen as she put the pieces together.

Truly the Lord had given Rosa a miracle. She would choose life for her child. In fact, Rosa joined with the 40 Days for Life effort and to this day is still praying with the group.

The next day Rosa went to a local pregnancy help center, where it was confirmed by sonogram that she was carrying a healthy baby.

The pregnancy help center immediately began to see to Rosa’s various needs with its services for counseling, getting her a job, food and other material aid.

Tweet This: The pregnancy help center immediately began to see to Rosa’s needs with its services for counseling, a job, food & other material aid.

She just entered her second trimester.

“It was a whole miracle!” stated Delgado.

Editor’s note: Rosa’s name has been changed to preserve her privacy.