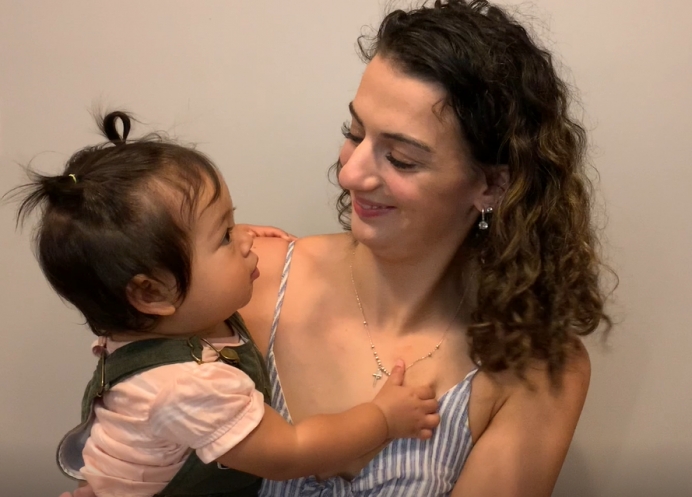 “Don't be scared,” there is support: young mom who chose life to others in her situation

A young single mother from New York State is showing that there is support for women facing unexpected pregnancy, and she says moms in this scenario should not be afraid.

Katy became pregnant at 16, and while she hails from a family with pro-life values, the fear she experienced was strong, driving her to think abortion was her only option.

Katy was saved from going through with an abortion when loved ones intervened, and today she happy to have her daughter Mariana, who will soon have her first birthday. Katy is also making strides in her education.

She recalled for Pregnancy Help News what it was like when she learned she was expecting a baby as a teenager.

“I was a junior and it was on Christmas day,” she said. “I took a pregnancy test and I found out I was pregnant and then I was scared, I was so scared.”

Katy said she began thinking about all the options that she had.

“I didn't want to have an abortion, but I was like, well, what other choice do I have?” she recalled, “And then I was finally thinking, I guess I am going to get this abortion.”

Katy scheduled an appointment for an abortion and went to the facility.

“But then my mom knew about it because of my boyfriend,” she said. “He told her, then she came and got me.”

While Katy was disconcerted by the intervention at first, she soon came to realize its significance.

“If I would have stayed at the clinic I wouldn’t have this beautiful little girl,” Katy said. “I would have nothing. And I would just feel so depressed. I’m so glad that my mom came to save me.

Katy called the Alight Center in Hudson New York, and staff there arranged for her to have an appointment.

“My heart went out to her,” said Akeria Bailey, Alight’s Client Services director, “because I knew she was afraid, and I knew in that moment she felt like she had no other option than abortion.”

PHOs served almost two million people in 2019, providing hundreds of millions of dollars in essential medical, education and support services, according to findings from the Charlotte Lozier Institute.

Medical services offered by U.S. PHOs such as the Alight Center include free pregnancy tests, ultrasounds, and testing for sexually transmitted infections. PHOs also assist with securing healthcare coverage for low-income women, referrals for many other resources, clothing, and supplies, along with psychological support for individuals experiencing abortion regret.

Key among the support offered by PHOs is simply being there for women in and through their need.

When Katy came to the Alight Center and expressed her fear over her situation, Bailey said they talked and prayed, and she felt like this produced a connection.

Katy recalls when she went into the Alight Center, Bailey and Executive Director Jennifer Lawlor helped her so much throughout her pregnancy.

After talking things through, Katy determined at first that she would place her baby for adoption. Over time and after more discernment Katy came to the decision that she would parent Mariana.

“It’s okay if you want to parent,” Bailey had told her. “We’re going to be here to walk alongside of you.”

Katy is also demonstrating that women can realize their dreams at the same time they choose life for their unborn children.

Katy completed high school early and plans to go to South Carolina to become a certified aesthetician, and then go back to New York to study to become a nurse.

She told Pregnancy Help News that she is interested in being a nurse because she loves helping people.

Bailey said she would not be surprised if in the future Katy was sitting in her position helping other young women.

Because of her hard work and her choice for life Katy is getting help with continuing her education.

She was recently named the latest recipient of the Unplanned Movie Scholarship, which assists moms who choose life and pursue their educational dreams.

The scholarship is a partnership between Unplanned lead actress Ashley Bratcher and Heartbeat International. Bratcher was inspired to create the scholarship by her role in the movie which was based upon the story of pro-life activist Abby Johnson. Katy is the third mom to be named as a recipient.

Bratcher traveled to the Alight Center in New York to surprise Katy and award her with the scholarship. After arriving at the Alight Center for a graduation party in her honor, Katy was surprised with the award, and grateful, stating, “That's going to help me a lot.”

Bratcher told Katy she'd heard a lot about her and that her story was inspirational.

“I know it's not easy to be a young single mom," Bratcher said. "You're really working hard to be the best mom that you can be."

With the scholarship, Bratcher said, "We just want to see you succeed and we want to support you and all the ways that we can.”

Katy is resolute in her choice for life for Mariana.

“It feels great being Mariana’s mom,” she said. “She’s such a good baby. She loves being cuddled and everyone holding her. She just loves to feel the warmth.”

“I think I am a good mom,” Katy said, “because I just care for her so much and I love her so much.”

“And I'm so glad I became a parent because she's amazing,” she told Pregnancy Help News.

Lawlor said that it is Katy who is amazing.

“She's doing a great job as a mom and we're so proud of everything she's done and how she's raised Marianna,” Lawlor said. “We can't wait to see what's next for her.”

Asked what she would tell other young women facing an unplanned pregnancy, Katy said, “Don't be scared, get the support, talk to other people, and just know all the facts about what you're going to get with an abortion.”

Tweet This: “Don't be scared, get the support, talk to other people," and know the facts about abortion - Single mom who chose life

Katy reaffirmed her choice for life, saying that her daughter brings out the life in her.