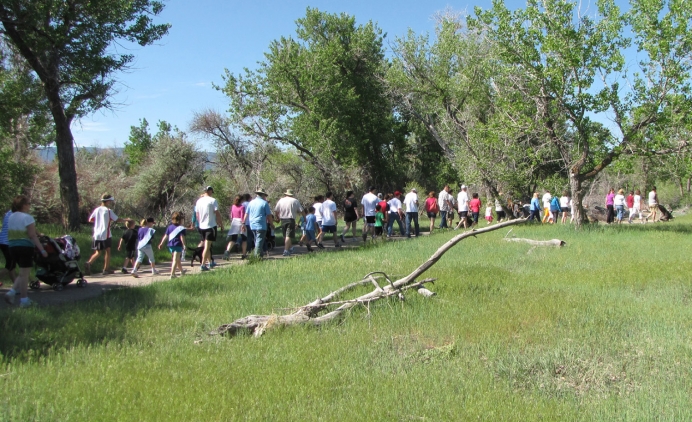 Along the banks of the gently flowing North Platte River, a system of trails meanders through Casper, Wyoming. Dozens of people walk along one of these pathways each spring to support True Care Women's Resource Center, while they celebrate God's creation and the work He’s doing through the Center.

“I see the trees, not long after their leaves have first come out, showing new life,” said Terry Winship, True Care's CEO. “It's morning and the beginning of summer. There's a feeling of expectation, the ability and opportunity to be outdoors more and soak in God's goodness.”

At 9:30 a.m. on June 6, 2015, people will walk near the banks of the river among towering cottonwood trees, an area which welcomed thousands of pioneers during the mid-1800s. Casper is home to the historic Oregon, California, Mormon and Pony Express National Historic Trails.

The paths these emigrants followed with hopes of a better life are some of the same taken by the True Care walkers. They, too, walk for a better life: a better life for women facing an unplanned pregnancy and their unborn children. Last year, more than 350 women received services from True Care.

Tweet This: This is not a protest walk, it's a sign of unity, to promote a culture of life. @wyoauthor1

“This is not a protest walk, it's a sign of unity, to promote a culture of life,” Winship said. “If the people who went before us, the pioneers, didn't have that fighting spirit (for a better life), they wouldn't have made it. They, too, had a culture of life... and hope for the future.”

“I want to be a sponsored walker to be a part of the incredible privilege and responsibility to get the truth out to those who have no idea concerning the truth, God's truth, about the unborn,” said Myrtie Peterson, who has participated in the event for five years.

This year marks the 10th anniversary of the fundraiser. The number of walkers increased significantly in a year, from 98 in 2013 to 199 in 2014. This year, the Center has a goal of 250 sponsored walkers.

Each year brings new ideas to encourage more participants. For example, in 2014, the Knights of Columbus served a pancake breakfast and a moms group hosted a face-painting activity. This year, a photo booth will be added.

“We always have a photographer taking pictures of the day, but we thought it would be fun for people to capture their pictures and they can share it on social media if they want,” Winship said. “With their permission, we'll share it on our Prolife Casper (Facebook) page as well.”

The pancake breakfast and face painting-activities will be part of this year's Walk again, too, she added.

The theme has also changed over the years. For the first eight years, the event was known as the Walk for Life. Last year, a new theme was created: “Who is a Person?” This year the theme is “Heroes Walk for Life.” The Center is encouraging children—and adults—to dress in superhero costumes.

“We thought it would be fun, seeing kids in costumes,” Winship said.

The event brings out various people: families, friends, those with dogs, children's groups, church congregations. Walking among the trees and near the river brings a sense of peace and companionship, walking for a common cause in the beauty of God's creation.

“There is certainly camaraderie (at the walk),” Winship said. “There's something about people gathering together, to eat, to talk—it creates community and promotes unity.”

“I am very, very thankful to God for True Care,” Peterson said. “It's important for people to be sponsored walkers and to participate in the Walk to ensure that True Care has the needed finances to do what God has called it to do. Participating in the Walk is a message to our community that standing for life is a priority.”

Peterson gave a presentation at her church, College Heights Baptist Church, about the event, encouraging people to become sponsored walkers or to sponsor a walker. She talked about the statistics of abortion in the U.S., which number 1.21 million, according to Operation Rescue, and provided information about abortion’s worldwide prevalence. Having volunteers like Peterson, as well as Board members, speak to their own congregations as a lead-up to the walk is a major asset, Winship said.

“It's very effective,” she stated. “Their passion (for the ministry) shines.”

“Ninety percent of sponsored walkers have been recruited through the churches,” Winship said.

As the final preparations are made for the June event, Winship and her team are optimistic and excited. The goal is to raise $60,000, several thousand dollars more than during previous years.

“The Walk is fun, but we need sponsored walkers,” Winship stated. “We are raising funds to save lives.”

“Walkers tend to be people who are passionate about the life issue,” she added. “Maybe they can't volunteer but once a year, and they can plan ahead for this. It's their way of teaming up with us.”

Tweet This: "We are raising funds to save lives." @wyoauthor1

“The rubber meets the road for me concerning what people think that they are going to do when an unexpected pregnancy occurs within the life of a family member, neighbor, friend, coworker, etc.,” Peterson said. “How do we think we will help that person? The very best option is to refer the person to True Care. (But) what if we did not have True Care in our community? (The Walk) is one way that we can financially support (the organization).”

As spring breaks into summer, prompting more growth in nature and filling the North Platte River with life-giving water, True Care and its supporters will be filling the community's park and trails, helping sustain an organization that has been serving Casper and the surrounding area for more than 25 years.

“I am spiritually uplifted to know that I am doing what the Lord would have me do,” Peterson said. “I participate to raise money, to encourage the community's support, and to be encouraged myself … plus, it's a fun walk!”